Kudos to the kickboxing kiddo 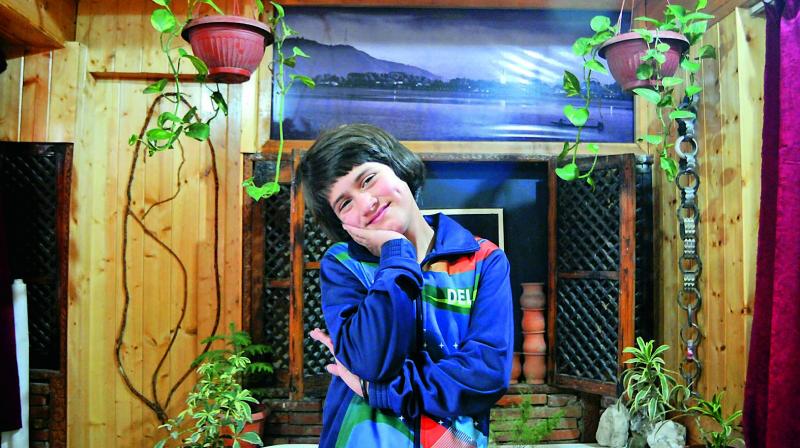 It’s only been a few days since the curfew in Kashmir has been lifted; daily life is inching back to normalcy. But Tarkpora village in Bandipora, about 65 km from Srinagar, is a picture of celebration.

Ever since eight-year-old Tajamul Islam beat her opponent from the United States to snatch gold at the World Kickboxing Championship in Italy earlier this month, her house has become a landmark in the district. A tent is pitched outside to welcome the steady flow of relatives and neighbours as they pour in to wish Tajamul. Her father, Ghulam Mohammad Lone, a driver with a private company, is busy answering congratulatory calls and messages. She, however, is oblivious to the buzz around her. Coach Fasil Ali knows that Tajamul didn’t have it easy.

In September this year, when Kashmir found itself in the midst of a curfew, Tajamul lived with Fasil to ensure that she doesn’t waste any time through the competition. He chimes in, “Her parents didn’t seem too happy with the arrangement but when they realised this is our only chance, they seemed okay with it.” Tajamul’s triumph means much more than a win for the coach. He says, “We don’t have the basic infrastructure in place if you compare it to a city like Delhi. This will even inspire girls her age to take up this sport.”

Since the international event — in which 90 countries participated in the event — required the competitor to weigh between 26 kg to 29 kg, Fasil had to put her on a strict diet, without putting a strain on the family’s earning. “Planning a protein-rich diet for Tajamul proved to be a problem. So we made do with easier protein options like chicken and eggs to make sure she was in the preferred range,” he explains.

That Fasil spotted Tajamul is only incidental. It was on a winter morning when Tajamul and her siblings spotted a bunch of kids performing martial arts. When Fasil asked the kids to join the group the next month, they shied away. He tracked down the family to personally speak to the father. In hindsight, Tajamul looks at the opportunity as plain luck. She says, “I was fascinated with the moves that these kids were perfecting. I saw them kicking and punching in the air. I knew I wanted to do it.” Tajamul knew she was getting better when she didn’t pant as much from her previous sessions. “Initially, I would get extremely thirsty after a warm-up session. Now, I can fight it out without panting or reaching for water,” she explains with pride.

Tajamul was previously in the news this April when she bagged the gold medal in the sub-junior category at the 2015 National Kickboxing Championship in Delhi. Even as the win established her entry into the World Championship in Italy, the lack of funds posed a threat. It wasn’t until senior vice-president Kick-boxing Federation of India, Ghulam Nabi, Tantray, chipped in, that she secured a seat at the competition.

Visibly excited about her maiden trip abroad, it was a plate of biryani that Tajamul was waiting for, after the win. She says, “There were all kinds of food available but it wasn’t as tasty. So I always ate eggs and fruits as advised by my trainer, and decided to treat myself to a plate of biryani once I came back home.”

She may be only eight, but Tajamul is already a woman on a mission. She believes that she can make the stand-up combat sport relevant in her village, if she could meet the country’s Prime Minister Narendra Modi for only five minutes. “I want to ask the PM to help us with more facilities so that more children take up martial arts. If I can manage this feat, any child in Kashmir can.”

The sub-junior level champion doesn’t want to pat herself on the back as yet. She hopes to make the country proud and serve society in the coming years. She says, “Inshallah, I want to study ahead. When I grow up, I want to be a doctor, and continue with kickboxing.”