Usha Kiran shares her experience of forging friendships with local women, and the importance of being a peacekeeper. 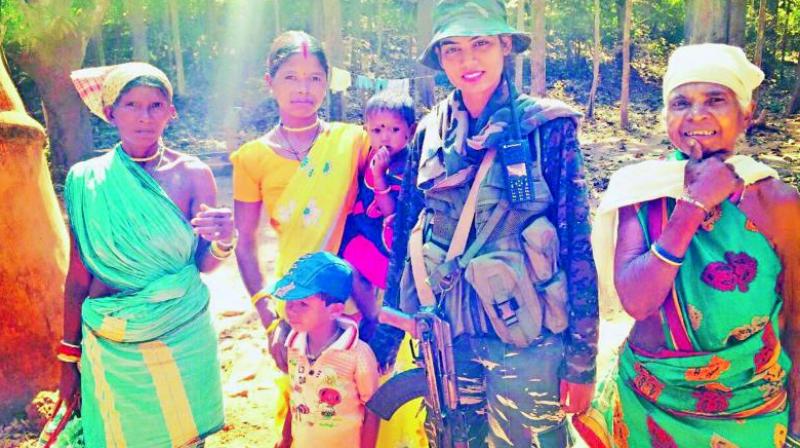 In the forests of Bastar, it is women who are seen working as they are mostly dependent on forest produce. Men are often under the influence of mahua, a local intoxicant, and idle away the hours. So it is women in the jungle who we investigate, it is part of our job to investigate everyone. It is but natural for them to get intimidated by the police, who is mostly men,” says Usha Kiran, Assistant Commandant with Central Reserve Police Force’s 80th battalion — the first woman CRPF officer in the Naxal hotbed.

For a police camp that hardly saw women coming in on their own, Usha’s posting has brought about a drastic change. “I have become friends with local girls here and if a girl comes in once, she definitely brings two more friends the next time. They come in asking for me all the time,” shares the 27-year-old, who not only teaches girls in the region but is also inspiring them to join the police force.

She joined CRPF as a trainee in September 2015. “I also did a ‘Counter Insurgency and Anti-Terrorism’ course afterwards and opted for Bastar as my first choice of posting. My second option was Jammu and Kashmir. Women have not got combat roles in army yet, but CRPF has women in combat roles for sometime now. I have an opportunity to work on field with my male counterparts and I have just completed my training, my physique is conditioned and ready for any challenge. The Naxal area happens to be one of the toughest deployments and I wanted to come here for the experience.”

While the Bastar terrain is very hostile, Usha has to walk 25 to 30 kilometres a day. “Women have a lot of mental strength and they don’t give up easily,” she adds.

Her father is also in the CRPF, as was her grandfather. While her family has supported her a lot, she adds, “I am from Haryana and if a girl is born there, no one celebrates. It is because my father and grandfather got a lot of exposure due to being in the forces, that their mindset was different. They gave me freedom and good education. Of course my mother remains concerned because I am deployed in a region where even many male officers don’t want to come, but she supports me a lot.”

While insurgents have not struck in a big way in the region she is currently deployed in, she says it is merely the calm before the storm.

Asked about the CRPF forces being accused of raping women in the region, she says, “I have heard about it. I was not here before, so I have not seen what happened then. Since I have come here I have not seen any such incident. My unit is very nice but I have not served for a long period in CRPF, so let’s see.”

She adds, “Since I have come here, I have seen the women here become more forthcoming. Also there is a difference between how they talk to me and my male counterparts. They end up sharing their family woes with me as well. I have somehow induced a feeling of safety in the local women, just by virtue of being a woman myself. Maybe earlier they didn’t feel safe as the camp was filled with men who were strangers to them.”

On a personal level, she also helps out girls with school fees and gets them stationery and books if they can’t afford them. She has even started receiving cooked meals and fruits from the women.

“My colleagues get jealous that they never received such things from the local people before,” she laughs, adding that she sees a bridge being formed between the community and the CRPF.

While she is forging these friendships, she also accepts that it is very difficult to differentiate between an innocent citizen and a Naxal.

“I do imagine myself in situations where in the future I might be doubting a familiar face. But an innocent person should never be punished, even if it means letting a Naxal go. A Naxal will get caught or killed eventually, but an innocent citizen is much more important. Also, the surrender policies are very good here, you get some cash and you are trained with some skill set to begin a new life. People also become informers. So if I find someone like that, I will encourage them to surrender. We are peacekeepers and that is what I am trying to achieve here.”