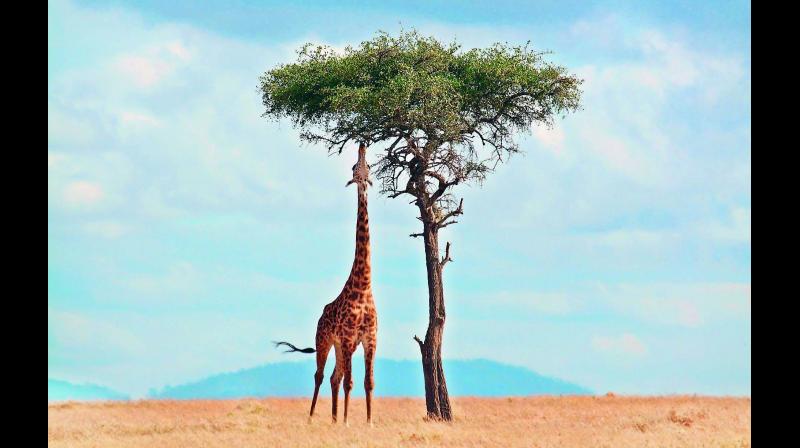 Can you see the giraffe?', asked my host and friend, Talent, in a hushed tone, as we peered into the sun-scorched trees. It was six in the morning, and I had just dragged myself out of bed - post a long flight - for a morning safari through Hwange National Park, Zimbabwe's largest at 14,651 sq. kilometres. Despite being sleepy, how could I possibly miss seeing a giraffe? And yet, alarmingly, I couldn't see it. Then something moved; the horns or technically speaking the 'ossicones' jutted out from behind the brown-yellow leaves. Then the 'bark' miraculously shifted, and atop it was a long, rounded mouth. Not afraid of the parked jeep and the creatures huddled within, she moved her long limbs gracefully, inching closer, while staring back at us. The 'cow' giraffe was smaller at about 14 feet, while the average male, known as a 'bull', touches 18 feet. Despite their height, giraffes don't make it to the Africa's 'Big five'. The term was originally coined by big game hunters for the most difficult animals to hunt on foot. Today, it's used by safari operators to refer to Africa's most popular jungle-residents; the animals that draw in most crowds - elephants, lions, leopards, rhinos, and African/Cape buffaloes.

Have you 'herd'?
That 96 elephants are poached every day in Africa for their ivory; that African elephants are the largest land mammals, and are slightly bigger than their Asian brothers; both male and female elephants have tusks that they use to dig for food and water and strip bark off trees and there are over 50,000 elephants in Hwange alone. Despite their large numbers, the Africa Wildlife Foundation notes that their numbers have declined in the country by 36 percent between 2001 and 2015. They estimate that if poaching continues, elephants in Zimbabwe will be almost wiped out in the next three decades.

Thankfully, today it is still impossible to make a trip to Hwange without spotting an elephant. At a watering hole, I see at least 20 elephants filling their trunks and spraying on themselves or each other. The babies seem playful, locking trunks with each other, slipping between the legs of the larger beasts. The timid young ones are given a little push into the water by their intimidating mommies. My guide explains that elephant families are led by matriarchs and consist of her sisters, daughters and grandkids. A family unit consists of anywhere from 20 - 25 members.

I watch as a baby elephant gets too close to a crocodile lounging in the water, but a watchful elder stomps its way and has the croc back up immediately. Much like humans they have strong family ties and a social network.

In the recent past, poachers have used cyanide to kill elephants in large numbers. Non-profit conservation organisations work together with park rangers to save the elephant. Legal remedies such as jail sentences up to nine years and significant fines also go a long way in protecting elephants. A recent drought has hit Zimbabwe and has killed hundreds of elephants. The government has responded by moving elephants to other countries.

Locking Horns
We drive deep into Hwange and to spot the African Buffalo. If you're wondering what the animal looks like, picture the pringles mustache. Now picture horns in the shape of that mustache, and you get the quirky looking Cape Buffalo. Make no mistake however, this rather comic-looking animal is dangerously unpredictable and can run up to 37 miles per hour. And we stay well away from the grazing herd.

Next we come across a crash of black rhinoceroses close to a watering hole. Zimbabwe is home to black and white rhinos and in 2014 had a population of about 766 rhinos, which is the Africa's fourth largest after South Africa, Kenya and Namibia. If you think black and white rhinos are named so for their skin colour, think again; they're both grey. The lip shape is what sets them apart; the black one has a pointed lip, while the white one has a squared one. We spot the rhinos bathing in the water and rolling in the mud which acts as a natural sun block and mosquito repellent.

Getting catty (or not)
Soon we reach a spot where fresh pugmarks are visible and head out in search of the elusive lion. Enroute, I spot a leopard that dashes away too fast for me to be sure of what I was looking at. My guide talks fondly of, 'Cecil, the most loved lion in Hwange'. Cecil was a 13-year-old lion, who was being studied by scientists at Oxford University, when he was killed by a trophy hunter. He left behind seven young cubs that were then taken in by another lion named Jericho. Unfortunately, Cecil wasn't the last of the lions to be killed in Zimbabwe and legal efforts are being to protect the lion. Internationally, certain airlines have banned trophies of lions.

Even as we search for the most prized of the 'Big 5', my guide points to the other inhabitants of this sprawling park: the 'Flying Banana', or the Southern Yellow Billed Hornbill watching over us from a tree. The bird earned its nickname thanks to its bright yellow hooked beak that really does look like the fruit.

We come across a herd of warthogs who pose for the cameras despite the many 'warts' or protective bumps on their large heads. Little wonder that they make it to the 'Ugly 5' a term coined by safari guides to refer to the not-so-glamourous animals such as the Wildebeests, vultures, hyenas, marabou storks. I may not have spotted the lion on my visit to Hwange, but a drive through the park teaches one not to miss the forest for the trees.