Will Sasikala be the next Supremo?

Ganesha feels the time is opportune for Sasikala Natarajan to achieve an important position in the party. 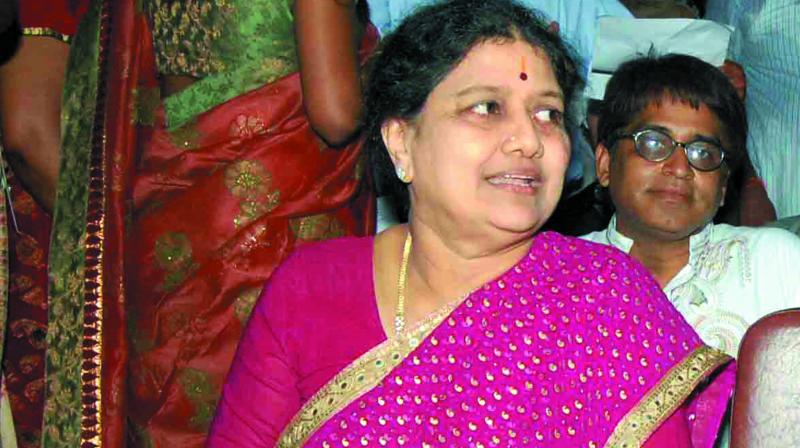 Sasikala Natarajan — the famous companion and soul sister of Jayalalithaa has seen a fair share of fame and media glare over the years. Things have taken a drastic turn in Tamil Nadu with Jayalalithaa’s demise and now, power and fame seem to be knocking at Sasikala’s door. The AIADMK party leaders have been urging her to take over as the CM, while there’s a lot of anger in some sections of the people against her. Ganesha feels that though her planets indicate a strong potential to rise high, the transiting planets will not let her path be an easy one. Some tricky situations and ugly controversies are likely to make things messy for her.

The planets indicate that Sasikala can be a very good strategist and can experiment with unusual systems of administration.

The Sun-Mercury-Saturn connect
Sasikala is born with the Sun in Capricorn, which is in conjunction with Mercury. This placement indicates good potential for success to some extent in politics. Mercury is in retrograde motion and aspected by natal Saturn from the sign of Scorpio, which indicates that she is highly intelligent and will have some interesting ideas up her sleeve. This also indicates a person who is a deep thinker and one who can be quite practical in her decisions.

Benefic planets
The Moon and Jupiter are conjunct in the Sign of Leo and this blesses her with fame, high position and social status. Apart from this, Jupiter is aspecting natal Venus. All the three planets happen to be top-level benefics and the favourable disposition of these planets explains her proximity to an influential leader like Jayalalithaa and the attention, popularity and support of the masses that she enjoys.

The strong Scorpio influence
Mars, Saturn and Rahu are in conjunction in the Sign of Scorpio. The union of all the top-ranking malefics in the mysterious Scorpio presents a hazy picture about the soul sister of Jaya amma. Saturn-Rahu together indicates vulnerability to legal issues and may create a lot of hurdles and challenges. The combination will create a lot of fluctuations and extreme situations in her life. She may sometimes be accused of being a little superficial or her actions may be considered suspicious. Also, the presence of Mars denotes disputes and differences with highly placed figures.

On the positive side, as the trio happen to be placed in Scorpio, she would be a person who can devise wise strategies to deal with complex situations and she would be quite a bold individual, who doesn’t mind exploring unchartered territories and trying unconventional ideas. She will also be good at gathering support of people and turning the backing of others into her political strength. However, her strategies may backfire on certain occasions and she will have to be extremely careful.

The ambitious Sasikala
Sasikala appears to be a highly ambitious person, who doesn't mind aiming big, as the Signs which are considered highly ambitious — Capricorn, Scorpio and Leo are all occupied by key planets. This configuration makes the person crave for attention, fame and power.

The favourable aspects
The transiting Jupiter is currently aspecting the Sun and Mercury which will give a boost to Sasikala’s political career. The transiting Saturn is moving over the natal Saturn which indicates a very crucial and decisive time period for her personal life and political career. The period between mid January 2017 and April 2017 will be very important for her and she is likely to gain more control over the party and political affairs. This period seems opportune for her to get the most powerful position in the party. She may emerge as one of the strongest leaders in Tamil Nadu politics.

The restrictive influences
However, the transiting Rahu is moving over the natal Moon and Jupiter. So, some of her decisions and initiatives may prove to be fatal. There will be conflicts within the party and someone may try to tarnish her image. It also indicates some legal issues which may impede her progress.

Conclusion
The favourable influences being rendered by the benefics will not be enough to save Sasikala from controveries and troubles. She will have to make her moves carefully to avoid stepping on landmines.