Badminton biggie P. V. Sindhu says 2016 has been a fantastic year that has totally changed her life. 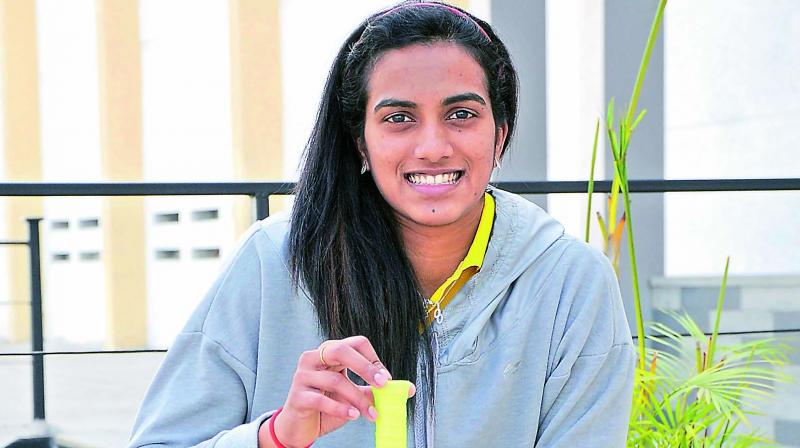 On court, she stands tall. Towering at 5 feet 10-and-a-half inches, she has an extensive reach and packs tremendous power into her dreaded overhead smashes which more often than not leave opponents cringing or sprawled. Off it, P.V. Sindhu is an easy going 21-year-old who giggles quite a lot.

The Hyderabadi has made giant strides this year, having smashed through the stratosphere with splendid performances that have won her an Olympic silver, a Superseries title, a place in the season-ending Finals where only the elite eight get to compete, a Grand Prix gold and the country’s highest sporting honour — Rajiv Gandhi Khel Ratna award. She couldn’t have asked for more. “It has been a fantastic year for me,” Sindhu says with glint in her eyes. “I achieved my dream of winning a medal at the Olympics, followed by success in the China Open (Superseries) tournament, and then made it to the semifinals of the World Superseries Finals. Overall, the year has been memorable.”

Though each prize has its own value, the silver in Rio remains special. “The Olympics were a totally different experience. They come only once in four years and every sportsperson dreams of competing and winning on that stage. The aura of being among the who’s who of world sport at the Games is a different feeling altogether,” Sindhu explains.

In the run-up to the August Games, she was anxious to qualify. “June was the deadline for selection and I got to know of my making the cut two months before the Games and began training really hard, putting my all into it,” she says.

“At the Olympics, it was a tough draw and winning each round was very important for me but I took it point by point and never thought about the finals. Eventually, she found herself within a shot at the glittering medal. That’s when she began to feel the weight of expectations. It got heavier as the opponent was the World No.1. Sindhu raced off the blocks to take the first game before Spaniard Carolina Marin came back into the match to take the next two games and gold. “You win some, you lose some,” Sindhu shrugs.

Silver was good enough for India though (with wrestler Sakshi Malik grabbing a bronze) and Sindhu became the poster girl. A lot of young girls had begun pestering their parents to buy them badminton racquets. The star beams when pointed to the spurt in activity around shuttle courts post her success.

Handling stardom is a different ball game altogether, but “I have been really enjoying everything that has come my way after the Olympics,” she chuckles.

That prominence pasted her on billboards but snatched her personal space. “Yes, it’s tough at times as you begin to lose your space in public, get busier as you travel a lot more. I hardly get time for myself these days. Success brings in a lot of expectations and makes you work even harder,” she says.

That’s not all. The list of sacrifices is longer and involves maintaining strict discipline, sweating it out at the gym, eating right, no late nights, no ice-creams and cutting down on favourite foods. “You need to control your diet. Ice-creams and chocolates will have to be wiped out, which is tough, but you’ve got to do it,” she says.

Back on the regular circuit, it was the coveted Superseries which was high on Sindhu’s agenda. She ticked that box in November by eclipsing local favourite Sun Yu to win the China Open. “Winning that title boosted my confidence. I always wanted to win at least one Superseries title this year. That victory took a lot of weight off my shoulders,” she grins.

Sindhu has a fantastic support system at home to fall back on. “It helps a great deal to have sporting parents (her mother and father have been volleyball players). I get a lot of help from my family without which I could not have done all this,” she compliments.

Coach Pullela Gopichand is another person who has played a key role in her career. “I have been training under him ever since I was 10 so he knows me really well. I am at this level because of him,” Sindhu acknowledges.

With 2016 wrapped in silver, the goals for next year have been set high. “The (coveted) All England and World Championships are on the radar,” Sindhu breaks into that big smile.