2016 Year of the Stunners: Checkmate!

Young chess player Praggnanandhaa is capable of being the best, just like his idol Viswanathan Anand. 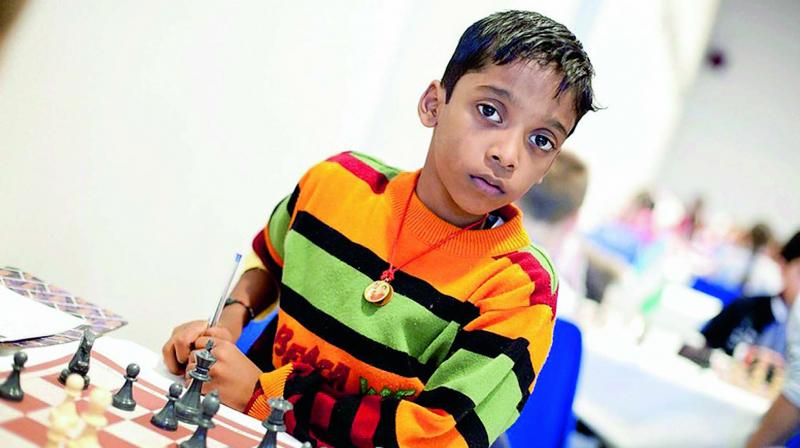 To be successful in any game you need three important attributes. You need to be talented, sincere and ambitious. And without any hesitation I can say the young Praggnanandhaa is all these three and more.

Around three years ago he came to me and since then I have been coaching him. He’s one of the most talented kids I have worked with. He’s sincere, he wants to be successful and has the will and desire to become the world champion. The thirst to become a champion is his driving force. Even at this young age his will to succeed is very evident. He is a very ambitious youngster.

The passion for the game is very strong in him and most importantly he believes in himself a lot. There is not a drop of self doubt in him and that has a major positive impact on his game. I believe, to succeed in anything you need to have faith in yourself before anything else. And, without any doubt I can say that this kid believes in himself. He knows what he is capable of and that has and will help him win major titles.

Chess has nothing to do with age. He’s just 11 years old and you don’t necessarily need patience to succeed in the game. For a game like chess you need overall development. There are several contributing factors. Once a kid has an inclination towards the game, it’s not difficult for him to grow into the game. In this case, he loves the game and moreover he loves to travel and the tournaments allow him to do that. Travelling for many days also helps him make several friends on the tours. All these are contributing factors.

Another important aspect to the growing success of this youngster is that he’s smart enough to recognise what is good for him. I have seen many kids who have talent, but they fizzle out later in life.

Usually talented kids take it lightly, but just having talent is not enough. Unless you put in a lot of hard work the talent will go to waste. Talent and hardwork jointly is the key to success. This little boy has caught onto this concept from the very onset and knows what’s good for him. He has already tasted success at such a young age, like becoming the world’s youngest ever chess International Master. But he is well aware that without hard work he will not get too far.  On a daily basis he puts in six to eight hours of practice. Sometimes he sits with his elder sister Vaishali, who is a two time world youth champion. His interest for the game has developed having watched his sister play from a very young age. Apart from that he also takes part in group camps that we organise in the mornings at the academy.

As a coach I have to try and help the child develop overall. Moreover one must not downplay kids when they lose. Losing and winning are part and parcel of the game, and parents need to support their kids through both. Parents tend to be disappointed and upset and show their frustration when a child does not do well. But that has a negative impact on the kid. Praggnanandhaa’s parents are supportive throughout. They are always there for him and never downplay him, that way he does not feel the pressure of expectation and always has support no matter what the result.

Many times both he and I have been asked where we see him five years down the line and neither of us have a specific answer. That is because in our way of training we don’t set specific targets.

In our approach we don’t give too much attention to the results. But yes, we both know that at the end of the day he wants to be the best in the world. We have not set ourselves a time limit but just a goal. And to become the best I believe you have to be good in everything. At the end of the day whatever happens will happen. But I can confidently say he is determined and capable to be the best like his idol Viswanathan Anand.

As told to Chitrangada