Both cheap and versatile, India’s favourite snack food is actually a great ingredient in elaborate recipes too. 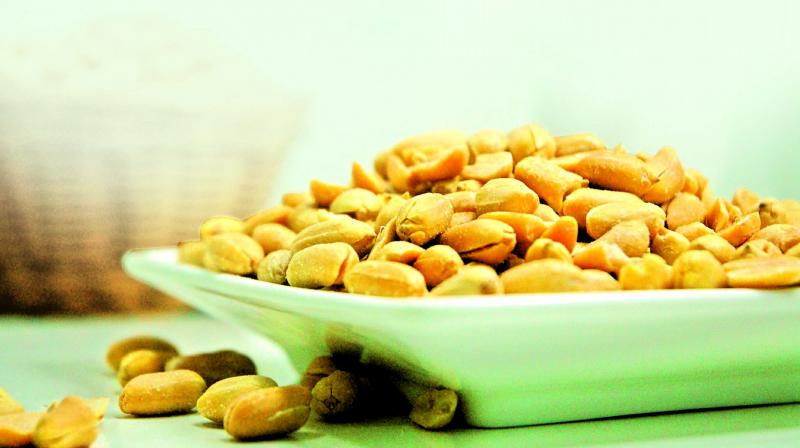 Peanuts or moongphali, roasted and salted and sold on the streets in paper cones, make for a great snack.

I’m standing on the palm fringed beaches of Sindhudurg, a beautiful coastal town in Maharashtra close to the border of Goa. The virgin beaches and pristine waters entice the eye but the speciality of this region undoubtedly is its traditional Malvani cuisine. Like all coastal food, fish and coconut dominate but in addition their signature spices, it’s the liberal use of peanuts in the food that adds special crunch and flavour.

My guide through the ABC’s of Malvani cuisine is Shagun Mehra who runs a stunning boutique hotel here called Coco Shambhala (just four private villas). Nestled in a tropical garden, barely 200 metres off the beach, the villas are designed as inclusive, barefoot retreats. “Our kitchen is an exciting platform for us to experiment with local, seasonal and fresh ingredients. The recipes are inspired from the authentic coastal cuisine of Malvan and its luscious produce with dishes such as sol kadi, Komadi vade and Malvani curry.

Malvani food celebrates the very best of fresh seafood and local produce from the Sindhudurg coast. “At Coco Shambhala all our ingredients are sourced from within a 50 km radius of the resort and peanuts play an important role in our daily changing menus as they are so versatile,” says Shagun.

All about the Peanut
Peanuts or moongphali, roasted and salted and sold on the streets in paper cones, make for a great snack. It is equally versatile in the kitchen and is widely used in Gujarati and Maharashtrian cuisine.

Born in tiny cluster pods underground, which are then dug up and dusted, peanuts grow all over the world - most widely in USA.

Peanut shells are beige and rough on the surface whilst the actual peanut is fresh and moist. Once dry they turn dark and brittle.

Now here’s a big surprise — peanuts aren’t really nuts. They are actually legumes, and so are more closely related to soybeans and lentils than to almonds and walnuts. But like tree nuts, peanuts can be eaten as a filling snack or as a protein-boosting ingredient in a variety of ways.

COOKING WITH PEANUTS
In Western India, peanuts are ground, crushed or used whole in both dal and vegetables. They enhance the flavours of certain leafy vegetables like spinach as well as potatoes and sesame seeds. To cook, crush coarsely and add to hot oil. Fry until they begin to change colour then add the rest of the ingredients. Perfect in cucumber salad with a tadka of peanut and curry leaves.

Another novel tip for cooking with peanuts is to add it as an ingredient in stuffing as it lends volume and enhances the taste and texture. In India, peanuts are a major ingredient in sweets such as chikki.

HEALTH BENEFITS OF PEANUTS
Many people avoid peanuts because they are supposed to have a high fat content compared to the other ones in the same family. Hence they miss out on host of health benefits.

For starters, peanuts are great for your heart as they are loaded in monounsaturated fats, the type of fat that is emphasized in the heart-healthy Mediterranean diet. Studies of diets with a special emphasis on peanuts have shown that this little legume is a big boost for a healthy heart.

That’s not all. “Peanuts are great sources of vitamin E, niacin, folate, protein and manganese. They contain a rare ingredient called resveratrol, the phenolic antioxidant also found in red grapes and red wine that is thought to be responsible for the fact that in France, people consume a diet that is not low in fat, but have a lower risk of cardiovascular disease compared to the U.S,” says Pune-based dietician Malini Mukhi.

The best part is that peanuts are affordable to all as opposed to nuts like almonds and pistachios yet have the same nutritional benefits as their upscale relatives! An ounce a day of nuts — roughly a quarter cup or a small handful — is a generally a healthy portion.

A word of caution: Try and eat them plain without an overload of salt to get the best benefits.