A sprinkle of cinnamon

A spice box staple, Cinnamon or Dalchini works well in both mains and desserts and is great for health too. 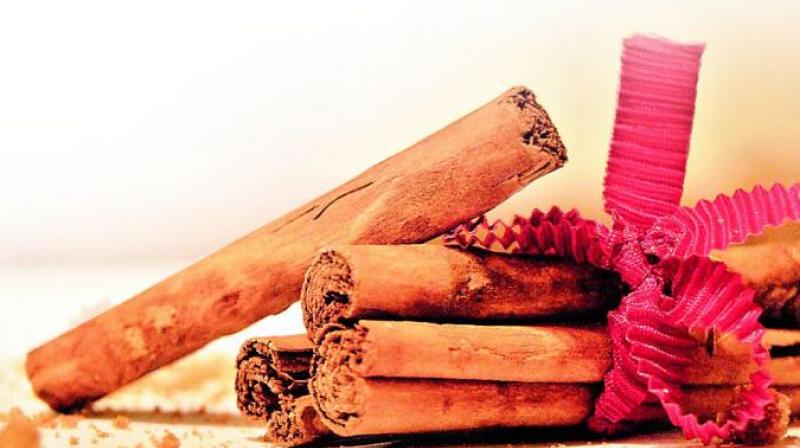 Everyone loves the dense, woody aroma that emanates from a steaming hot cup of cappuccino or cinnamon dusted cookies. Cinnamon was one of the first spices to be used in the ancient world. It was brought into Egypt as early as 2000 BC. Closer home we find records of its existence in Sri Lanka from the 13th century onwards. In fact, so coveted was cinnamon, from time in memorium that the Portuguese colonised Sri Lanka for it but were eventually defeated by the Dutch who controlled world prices by limiting its supply.

An evergreen tree of the laurel family, Sri Lanka is its largest producer and perhaps the best cinnamon comes from our neighbour. The leaves are large, leathery and shiny and the tree reaches about 35 feet. The dried inner bark of the tree holds the spice. The longest, unmarked pieces are rolled by hand to form curls and then dried. The long, thin scrolls are called quills and are brittle in nature whilst the ones that fragment in the process of handling are quillings.

Today, there are primarily two varieties of cinnamon available — Cassia cinnamon from China, Vietnam and Indonesia and Ceylon cinnamon from Sri Lanka, India, Brazil and the Caribbean. The cheaper variety, Cassia cinnamon has a stronger flavour while Ceylon cinnamon is mellow and sweet.  So select your cinnamon according to the flavour you wish to impart to your food. “Extremely versatile this spice works well in curries, rice, meats and desserts. And across all types of cuisines not just Indian. Its perfect in slow roasts especially meats. “In our homes it forms part of the spice blend in the garam masala mix with other spices such as cloves, cardamom and peppercorns,” says Varun Kinger, Outlet Head Chef, Rivers To Oceans, Mumbai.

Cinnamon is usually available as quills, quillings or in a fine powder in bottles.
Often the buds are used as a spice. When purchasing cinnamon check that the quills are whole and not chipped. Its easier to grind cinnamon at home as the store bought versions loose their flavour quickly and end up tasting like sawdust. Buy small quantities and consume in a month.

Cinnamon is great spice and has it’s heels dug in traditional cooking. It is used in everything from Indian desserts to tea. But it also has healing value. “Cinnamon helps to regulate insulin levels. Half a tsp of cinnamon in a glass of boiling water two times a day can help to bring down insulin resistance and better control sugar levels. 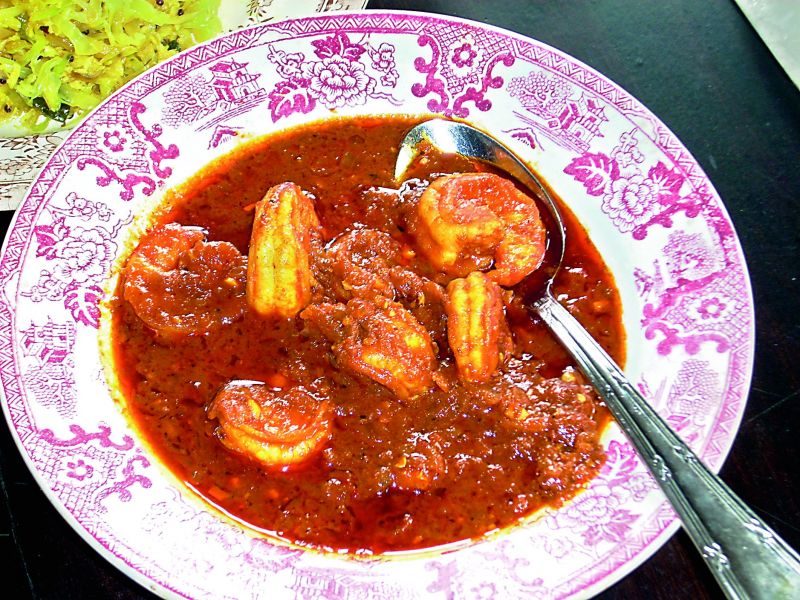 Heat a pan and dry roast the masala ingredients together till it turns into a dark brown colour. Keep aside and let it cool. Once it’s cool, grind into a smooth thick paste with some water. Keep aside. Now, heat a skillet and add the oil. Fry the onion and ginger together, when the onion starts to become transparent, add some salt and turmeric powder. Keep cooking for couple of minutes, then add the tomatoes and curry leaves. Cook till the tomatoes are soft. Add the shellfish pieces, and half a cup of water. Close lid and simmer for about 10 minutes. Now, add the ground x. Add half a cup of water. Close lid, leaving a small gap to let it evaporate and cook on a slow flame for another 15 minutes. Check for seasoning and serve hot.

“Cinnamon is also highly anti-inflammatory and can help protect and repair tissue from damage. It is also high in antioxidants. But you must make sure that you use Ceylon cinnamon for health benefits,” says nutritionist and food coach Anupama Menon. The commercial cinnamon that you generally buy off the rack in grocery stores may be harmful due to the higher concentration of coumarin (flavouring agent) present in it, this commercial cinnamon is called cassia cinnamon. In sensitive people it may affect their liver. So always choose the authentic Ceylon cinnamon for all health benefits. 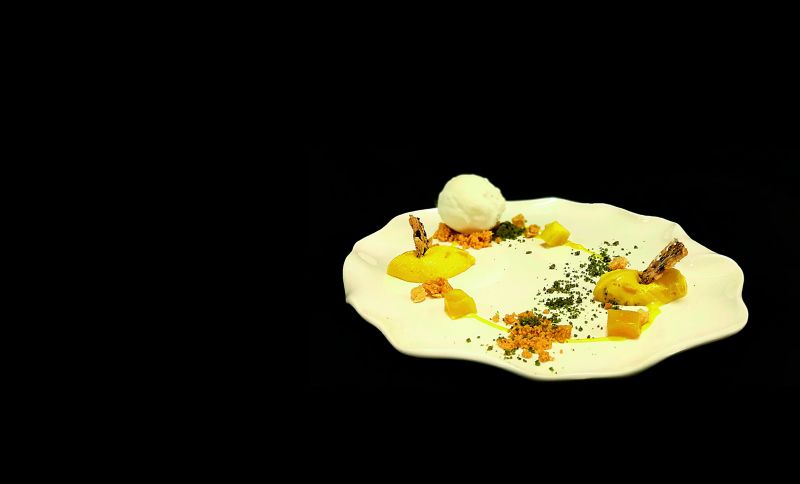 Puree mangoes in processor until smooth. Set aside 2 cups of mango puree. Beat cream cheese, sugar, dessicated coconut powder and vanilla in large bowl until smooth. Add eggs one at a time, beating well after each addition. Add 2 cups mango puree and beat until well blended. Add cinnamon. Preheat oven to 165°C. Lightly butter 9-inch-diametre baking pan. Pour this mixture in the baking pan.
Bake this mixture until set, about 1 hour 25 minutes. Refrigerate uncovered until set. Remove quenelles of it as required.
For the butter crumb
In a pan heat the butter, cook until the butter has browned. Add the milk powder and continue cooking until it is golden brown and keep aside.

For the assembly of the dessert:

1. Put 1 tbsp of the butter crumb on the plate and place the coconut and jaggery ice cream on it.
2. Place the diced mangoes on the plate.
3. Make quenelles of the mango and coconut mixture.
4. Put 1 tsp of the pistachio crumble on the side. 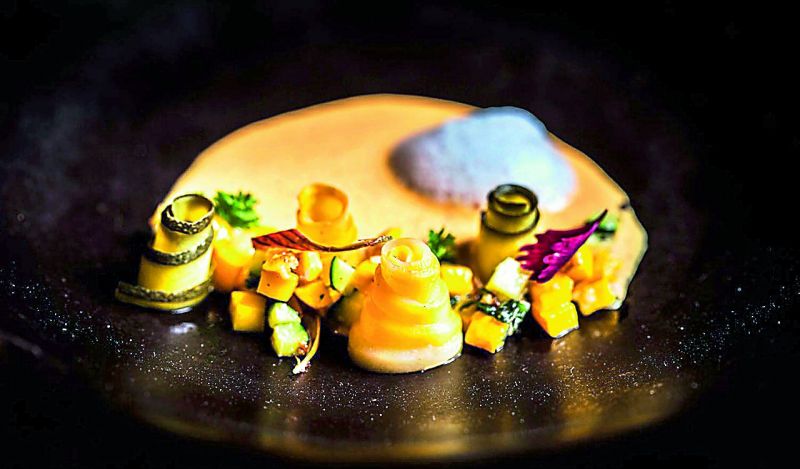 Preheat oven to 180 degree Celsius
Drizzle 1 tablespoon olive oil and sprinkle a pinch of salt on the inside of both halves of the pumpkin.
Place face-down on a large baking sheet lined with parchment paper or aluminium foil. Bake in preheated oven for 50-60 minutes, or until it is tender.
for the soup:
In a medium skillet combine 2 tablespoons olive oil and onion. Sauté over medium heat for 5 minutes.
Add garlic and ginger. Continue cooking over medium heat for 2 minutes.
Lastly, add salt, cayenne, cinnamon, coconut milk. Stir to combine ingredients. Cover skillet with a lid, reduce heat to low, and let ingredients simmer for 5 minutes.
Once pumpkin is done cooking, remove as much flesh as you can and discard the skin.
Add half of the pumpkin and half of the coconut milk mixture to the bowl of a large food processor. Process for 2-3 minutes, or until contents are completely smooth. Pour soup into a large pot over low heat.
Check for seasoning.