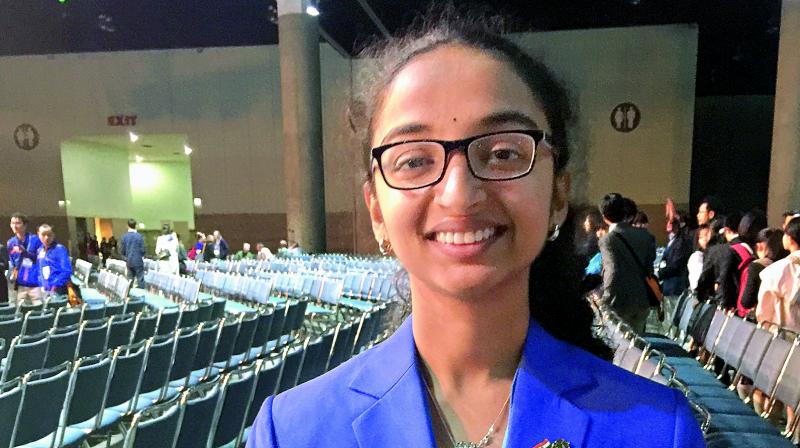 After developing a mobile application that measures pollution in lakes by obtaining data through crowdsourcin, Sahithi wrote a research paper which led her to name a planet after herself.

It’s not every day that you get to name a celestial body, is it? Luckily for Sahithi Pingali, a minor planet somewhere in the Milky Way, many light years away from Earth, has been named after her. This incredible achievement came after she won an award for her research paper, ‘An Innovative Crowdsourcing Approach to Monitoring Freshwater Bodies’ at the Intel International Science and Engineering Fair (ISEF), for which she was awarded second prize, and three special awards in the Earth and Environment Sciences category. Sahithi’s paper was based on the insights she gathered after having developed a mobile application that measures pollution in lakes by obtaining data through crowdsourcing.

While most 16-year-olds are busy enjoying their life, this schoolgirl from Bengaluru feels it’s important that people understand their environmental surroundings and work towards improving them. “To me at least, the sheer gravity of the environmental problems we face is something I can’t ignore. I’ve lived half my life in scenic suburbs of the US, and the other half in the city of Bengaluru. I think the contrast between those two settings made me extra aware of these problems — our cities are literally dying, sucked dry and choked with pollution. So, I researched the various factors that contribute to the pollution of our water bodies through surveys, sessions with experts, and interviewing people who live and work around the lakes.” 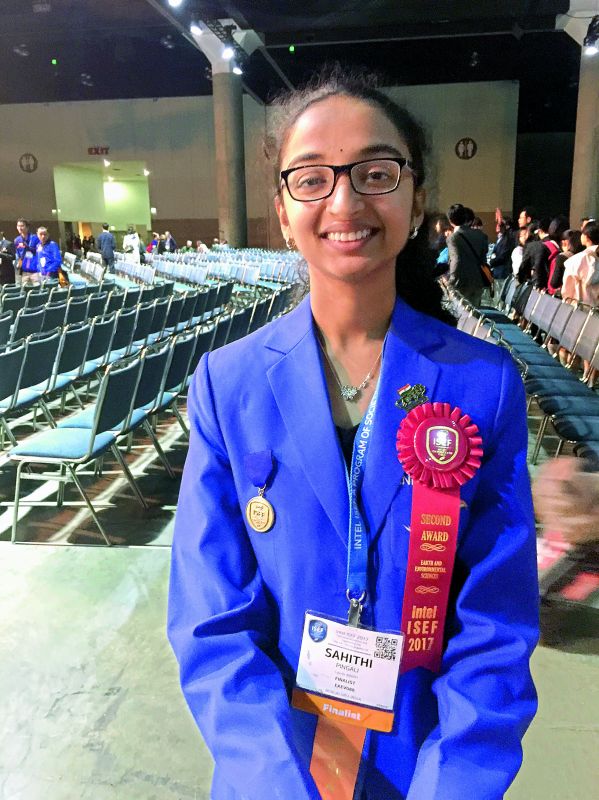 Explaining further about the mobile app she developed, Sahithi adds, “I’ve built a system that allows school students and citizens — even ones without scientific experience — to easily gather scientific water testing data, and to also share, analyse and understand that data. My system helps citizens collect data through an affordable, easy-to-use mobile-based water testing kit. The mobile app works with electronic sensors and chemical test strips to let the user collect several physical and chemical parameters of a water sample.”

Sahithi’s family is from Andhra Pradesh, and for the first eight years of her life, she lived in New York in the United States, before moving to Bengaluru. “My grandparents live in Hyderabad and we speak Telugu at home. My family has definitely played a huge role in my success. When working on my project, I was always encouraged by my parents. My two younger sisters, Lalitha and Sreekari, also helped me by asking many questions — they practically know my project presentation better than I do!” Sahithi says, talking fondly about her family.

Sahithi, who is currently in the USA, feels that she always tries to notice the best in everyone she comes across, and sees how she can do better. “I find myself inspired by everyone I meet, since everyone has a unique story to tell and a fascinating set of skills to bring to the table. In recent times, I’ve been inspired by Manu Prakash, a professor at Stanford University who has been labelled as ‘one of the most innovative scientists of our day’,” she says, adding that she is working on the project ‘An Innovative Crowdsourcing Approach to Monitoring Freshwater Bodies,’ and is brainstorming ideas for several other projects, at the University of Michigan in Ann Arbor.

However, several hours of hard work and research haven’t kept Sahithi away from pursuing her hobbies. “I’m a Bharathnatyam dancer and I play the veena. I also love to read and write. In my reading, I always make sure to have variety. I alternate between fiction and non-fiction, depending on what I’m in the mood to read. I think there’s never much trouble in making time for the things you love doing,” she says.

Although, Sahithi doesn’t have a fixed future plan right now, she wants to enjoy every moment and give it her 100 per cent. She feels what is important is that whatever she does; she should be able to put her heart and soul in it. “When I look to the future, I dream about a lot of things. I know for sure that I want to pursue my education in science or engineering in one of the world’s best institutions. While I might say I want to pursue science right now, I can never know if I might change my mind a little later. But wherever my aspirations take me, I want my work to be constantly motivated by social needs, particularly in developing countries and disadvantaged populations,” she concludes.