Harsha’s mother is a philosophy graduate teaching Montessori and he has a younger sister who is studying liberal arts in Pune. 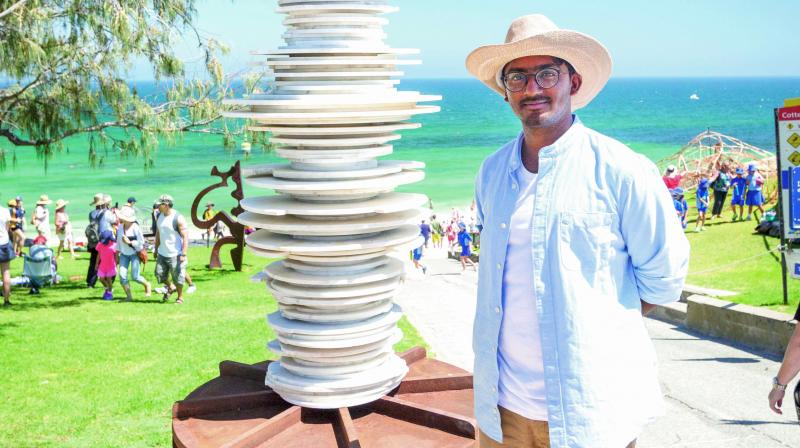 From a family of sculptors, it was only a matter of which artistic pursuit to imbibe for Harsha Vardhan Durugadda. The 89 born artist from Andhra Pradesh is the recipient of the major $50,000 Rio Tinto Award at Sculpture by the Sea, Cottesloe, Perth, Australia for his work ‘Column of Sound’. About the sculpture that married art with ambient sounds, Harsha says, “‘Column of Sound’ is based on the visual dynamics of an audio wave. Sound — temporal and ephemeral — translated to tactile and eternal. A paradigm shift of our sensory experience.”

This is Durugadda’s first Sculpture by the Sea, Cottesloe exhibition, having received the Andrea Stretton Memorial Invitation from Sculpture by the Sea, Bondi 2016. The boy who grew up in Visakhapatnam and Hyderabad and then moved to Delhi for a PG Diploma in visual communication, is simplistic in thought and lets his art evolve through his explorative thought.  No doubt influenced by his father, a sculptor. “I helped my father as an apprentice in his studio from an early age. In fact, my father is my most important mentor. My father’s philosophy professor Adinarayana, a gypsy and scholar who holds a record in the Limca Book of Records, recently completed a world expedition across parts of Europe on foot. I hung around sculpture camps/ symposiums as a kid with my father. Initially, what attracted me was hearing my father’s artist friends talk about gypsies, philosophy and life. It had a profound effect on me,” says an older Harsha, but it is easy enough to imagine the gawky teen eavesdrop with sheer glee.

“I think my eureka moment happened very early — 1997 when I attended the 9th Triennale at the National Gallery of Modern Art, New Delhi with my family. Nowadays, my inspiration comes from philosophy and human behaviour. I think we are missing the point of living life. I would want to use my artwork as a vehicle to communicate this. Be it Rabbi, Zen monks or Sufi Dervishes, I am trying to understand their words. In the beginning I was naive, more interested in the form, volume and skill of making an aesthetic object. But now my definition of aesthetic is not about the object, but about the experience and preserver. I will be a student of life till I die,” he says.

The award and his experience in Australia will be etched in his heart. “Australians have been very welcoming. My experience in Australia has been overwhelming because I got to share space with the works of senior international artists. I spent quality time with  Zadok Ben David from London, Jorg from Germany and Richard Tipping from Australia. I also met young international artists like Nenad from Serbia, Jina lee from korea and Zhou from China.

So what will this thinking mind, and one who wants to go beyond just measures of sight, to sound and abstract ideas, do with the huge cash windfall? “I want to use the prize money for international residencies and secure a studio space with equipment. I think the award is a great confidence booster and will garner more respect for my work,” he says. Not that it matters in the surreal sense, as his yearning to evolve is unfettered. He has earlier shown his work at London’s Covent Garden with Plastic Propaganda, a group based in the UK 2014. He also did a group show in Portland, USA with Emergent Art Space.

Harsha’s mother is a philosophy graduate teaching Montessori and he has a younger sister who is studying liberal arts in Pune. But life is not always ensconced by searing inspirations and obsessive explorations, the yoga buff loves swimming, long bicycle rides and camping outdoors, with a few philosophy books to converse with.

Living in Delhi, close to creative spirits is something Harsha has embraced heartily. He likes the Kerala artist Valsan Koorma Kolleri’s work and how he has pioneered using new methods and materials for his sculptures.

“He (Valsan) is also very radical and does not care about the art market. Globally, David Cerny from Czech Republic, is known for his controversial, political and satirical large works exploring the word situation. Antony Gormley is from London, famous for his large scale figurative works inspired by the mindful philosophies of the eastern worlds. When I met him in London in 2014, he was talking about the Buddhist Stupa and how his next work was inspired from its Philosophy,” he says.

The angst of the times is something an artist spends sleepless nights coming to terms with, or in effect letting that translate into his body of work, and Harsha is no different, in that he loves the diverse nature of India and believes that ancient wisdom and people were so much more grounded in their beliefs, norms and life, which then became a muse.

“I want to see if I can break stereotypes, disturb thoughts to see things afresh. I want to be mindful and create works resonating a sense of thoughtfulness. We have become very impatient these days, I want to see if we can change that, at least try,” says the artist, who just completed a month-long artist residency in Kalga, Himachal Pradesh.

David Handley speaks
“As one of 104 works by artists from 17 countries, Harsha’s sculpture is of high standard. I admire and enjoy looking at Harsha’s sculpture. It is serious and yet playful with its unusual combination of marble and steel. I have not seen a sculpture like it before. Harsha took a real risk in combining these materials and I think he has created something special. This is why I chose it for the Andrea Stretton Memorial Invitation to be in our Western Australian exhibition next March. Harsha’s sculpture fits nicely in its position at Tamarama Beach. Its playful side suits the beach, but it’s such a good work of art it could sit in a public gallery.”