Age on Sunday   23 Apr 2017  I don’t need to wear a bikini to attract the audience, says Tamannaah Bhatia
Age on Sunday

I don’t need to wear a bikini to attract the audience, says Tamannaah Bhatia

Tamannaah Bhatia speaks about her journey in films and how she has managed to stick to her set of beliefs. 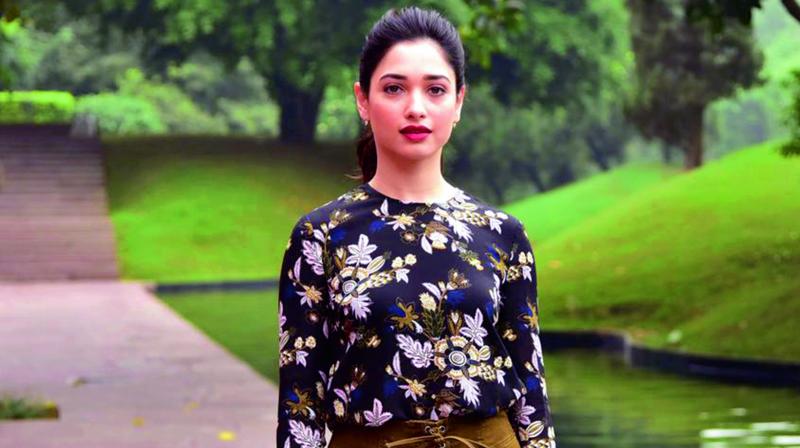 She got into showbiz as a teenager. Today, after all these years and her recent glorious outing — Baahubali 2 —  Tamannaah Bhatia is ready to take on creative risks. In a free-wheeling chat, the actress talks about being the south film industry’s milky beauty, the industry’s pay parity and a lot more. Edited excerpts from the interview:

Are you happy with the kind of Bollywood offers coming your way?
Yes, I am getting some great offers from Bollywood. I get two to three scripts a week. My next Hindi film is with Prabhu Deva. It’s interesting to work with the same actor again, but in a completely different set-up. I play a deaf and mute girl. It’s an interesting part for me to play.

You are often called ‘milky beauty’ in the south industry. How do you take to the tag?
Every south actor has a title given to him or her by his or her fans. I just feel great that the audience has accepted me for past eleven years. I feel happy that I have been able to entertain them for so long. I don’t know what I have done to get this kind of adulation. I don’t endorse the fact that being fair means anything. I know we live in a country where colour is such a big thing, but I don’t think of it that way.

Has being fair ever been a disadvantage in terms of bagging roles?
Not at all. For two of my films (including Baahubali 2), I actually had to tan myself. Now there is so much that makeup can do to create a look. I do feel that I’ve been stereotyped as a bubbly girl-next-door. It took me really long to get out of that. As an actor you have to work hard to get out of a mould.

How have you evolved as an actor?
I started my career when I was 13. The kind of work I want to do now has changed. I completely follow my gut and do what I like doing. I have become impulsive in a good way. I am taking creative risks as an actor.

Have you set any limitations for yourself as an actor?
Yes, I have. I made few promises to my parents when I got into the film industry. I don’t wear clothes that I am not comfortable with — clothes will not get you popularity. I don’t think I need to wear a bikini to attract the audience. I will not do that.

What’s your take on item numbers?
We can’t do without song and dance. Why do we look down upon it? Every youngster wants to look like Katrina — the way she looked in Kala Chashma. I love that aspect of Indian cinema. Why should it be derogatory at all? It’s something we should celebrate. I’m a fan of commercial films.

Do you feel that there’s a constant pressure to be fit all the time being an actor?
I don’t think it’s just me. I think youngsters in general face a lot of pressure. But we must take the pressure in the right spirit. The pressure is almost a blessing in disguise because it motivates me to stay fit.

Do you also feel there is huge remuneration disparity between a male and a female actor?
There is a huge pay disparity and it’s there in every industry. The disparity is huge in Bollywood as well as the south industry. I think there should be a time when female-driven films become so strong that we develop our own market.

Is Baahubali 2 bigger than a film for you?
It’s true for everyone associated with the film. None of us expected it to be so huge. It was a special experience doing this film.