In search of independence

In a recent trip to Goa, 62 enthusiastic companions, who were visually impaired, helped my senses and sensibility find a new direction. 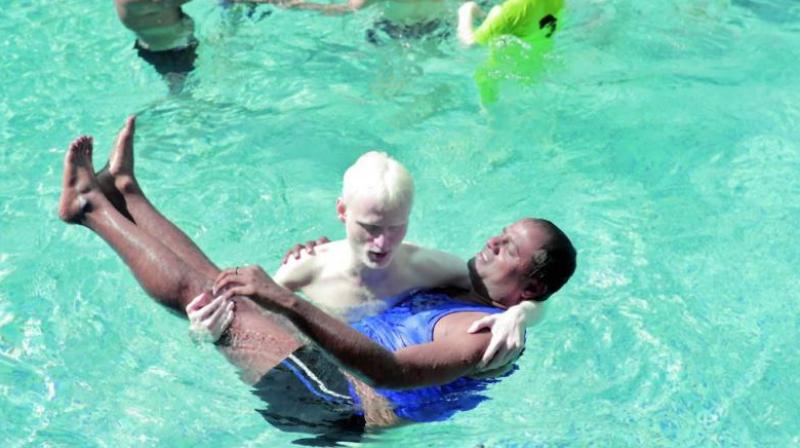 Fun in the swimming pool

There is something about our senses that is mystical, well beyond our understanding. And yet, we tend to sideline them. I have heard that travel enables you to rediscover your true self. In a recent trip to Goa, 62 enthusiastic companions, who were visually impaired, helped my senses and sensibility find a new direction. The destinations, beaches, cruises — everything was there. But it was the fun-filled experiences that made the four days magical. They went something like this:

The bhayankar dance
I have long shared an intricate connection with dance. While it’s awful to watch me move to DJ songs, I happen to be a trained classical dancer. It must be my alien grooves or half-baked steps that turn me into a living turkey being forced into an oven. Upon arriving at the Red Fox Hotel in Morjim, my home for the trip, we learned that a DJ night had been organised for our enjoyment. Despite being surrounded by so many people, this time, the fear receded. After all, the people around me had augmented my confidence to a great extent. Be it London Thumakda or Khadke Glassi, I danced with my heels on and enjoyed every single moment of it.

Lost my room key
It had been a long day of travelling, and the sleepyhead in me was oozing out. I started to sway and the elders had to drag me from the hotel’s lobby to my second-floor room, and just as I was to open the door, I realised that my key was nowhere to be found. Accompanied by a fellow traveller, I searched for it everywhere: the banquet, the hotel reception, even the corridors. Perhaps I lost it while taking a walk outside? So, at 11.30 in the night, here we were walking down the dark road. Luckily, I found the key, but not before realising that a scary spider had decided to rest on it! Well, it was all jumps and screams after that.

Sweater in 32 degrees
For a four-day-long trip, especially to a beach destination, I did not consider a trolley full of clothes a necessity. But you know how convincing a mother can be. Anyway, Goa, known for its tropical weather even in November and December, is the last place you should carry a sweater. Alas, the first time I open my bag after entering the hotel room, I find one flipping out from it, apart from the very few clothing options I had. “Oh, well,” I thought, “Let’s Goa with the flow.”

Offending brides and grooms
I had heard a lot about the Basilica of Bom Jesus, where 16th-century Navarrese Catholic Missionary St. Francis Xavier rests. When I finally visited the place, my excitement knew no bounds. I was glad to describe the place to my visually-impaired companions, who were happy to know of the various architectural elements of the place. Also, six or seven couples were being wedded there that day, and I jokingly commented, “Sirji, aur kai saarein bali chadh gaye aj” (Friend, so many people are in for trouble now). My fellow travellers laughed, but later I realised that the people standing in front of us were the couples’ near and dear ones. Oh, how we fled!

Sat on my spectacles
Just as we started to have fun around South Goa, it was again me and my shenanigans. I have no idea how my specs slipped from my T-shirt’s collar and reached the chair, but they did. Anyway, tired from the visit to the church, before I knew it, I had sat on something. “I think someone broke something,” one of my co-travellers stated, almost immediately. I stood up only to see my glasses broke into four pieces. Well it is supposed to be a good omen, isn’t it?

Sea darshan
The next day began with a relaxed morning. So, some of my traveller friends insisted that we spend it in Morjim Beach. I got into my swimsuit and happily accompanied them. However, I, being the avid swimmer I am (not really), decided to get a taste of what lies beyond the beach — the Arabian Sea!

Found a Ray-Ban
We reached the beach, with my aim to get into neck-deep water. But I had to take it slowly. I started to walk, water touching my feet first and then rising up to my knee. A bit scared, as the waves were not so humble, I started to walk even slower, noticing the water and the seabed very carefully. All of a sudden, something touched my toe and I started springing around only to find a pitch-black object lying on the seabed. Thankfully, it was not a living being. It was someone’s Ray-Ban goggles. I brought it back and described the incident to my friends. One of them laughingly said, “I have heard of an ‘eye of an eye’, just got to know about ‘specs for another one’.”

Lost my shorts
Most things don’t go according to plan with me. Anyway, here I was, drying my clothes after the dip into the Arabian Sea. After three-four hours, I went to the balcony and found that my shorts were gone. I was only carrying two, so for the next couple of days, either it was the same shorts at a stretch or a formal jumpsuit. One of my co-travellers justly said, “You know beta, it is the cycle of life. If you take what’s not yours, you’ll lose something that belongs to you.” I had learned it the hard way; it wasn’t that bad a deal, huh?

Crazy Baga
We reached Baga to witness the sunset. Everyone quickly wished to dip their feet in the water. However, with me being there, something was bound to happen. I took two, three steps and… well, it was an uneven beach. I was in thigh-deep water. People who were in front of me started calling out my name. I just heard them and kept on walking. After apparently 40 seconds, I reached where they were standing and realised that I seemed to have just gone down a slope. This was the first time I encountered a beach with variable depth. Wish I knew how to watch my step though.

Forgot to pack my running shoes
There is more to Goa than its exotic beaches. The rocky paths, humongous forts, hilly terrain, and muddy forests — this is the scattered scenery that one can find in Goa. And, I, being who I am, climbed the fort stairs, danced on cheesy tunes, and even strolled along the beaches — all wearing heels. This had nothing to do with my love for high heels, but it had to do with my forgetfulness. I had left for Goa on a Thursday morning and on the previous day, after returning from office weary and half-sleepy, had I packed my bag. And thus, the sport shoes remained unpacked. Luckily, whenever I got stuck, somebody or the other came to my rescue.

Vegetarian Goa
Goa is extremely popular for its scrumptious food. However, our itinerary was exclusively vegetarian. (There were ample options and opportunities if I was willing to try outside food or go on and order something by myself.) Eventually, the people around me, who were satisfied with the vegetarian fare, only made me realise that how simple delicacies can fulfil a soul’s craving. Thus, leaving them and going elsewhere wasn't something I wished to do anymore.

But in the end, this was all due to Rising Star Khilte Chehre’s trip, which gave me an opportunity to share and receive so much love and care, bond with these people and truly understand the definition of equality.