Hima’s spectacular achievement in Finland has showered her with awards. 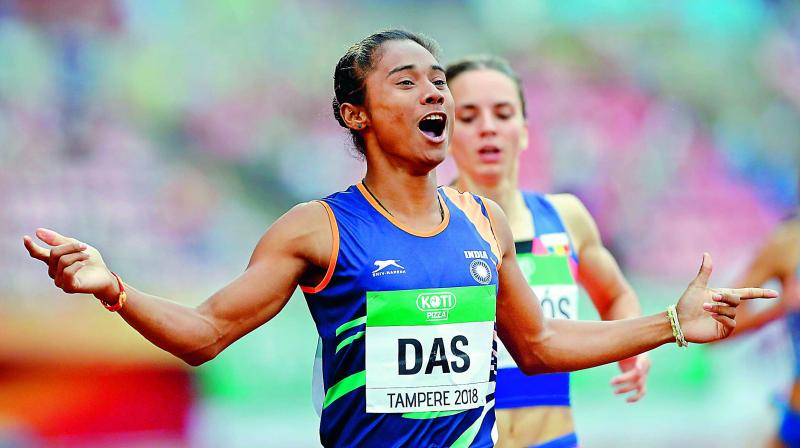 18-year-old Hima Das’ phenomenal rise from her village in Assam to winning gold in the international athletics arena is testimony to her sheer grit and determination.

It was a rainy day in 2007 when Jonali and Ranjit Das came out of their house upon hearing some commotion outside, only to see Hima, their seven-year-old daughter being whisked away by a police constable. Soon they came to know that Hima had gotten into a quarrel with her cousin while playing, which ended up with him getting badly hurt. As he was crying in pain, his parents informed the police. Hima was taken to the police station but the officer-in-charge sent her back home after seeing her age and hearing her arguments in her own defense.

Narrating these memories with pride, Hima’s father says, “She has been courageous since childhood. There have been occasions when Hima ploughed the paddy fields too. But even after all the hardships, she has created a space for herself.” 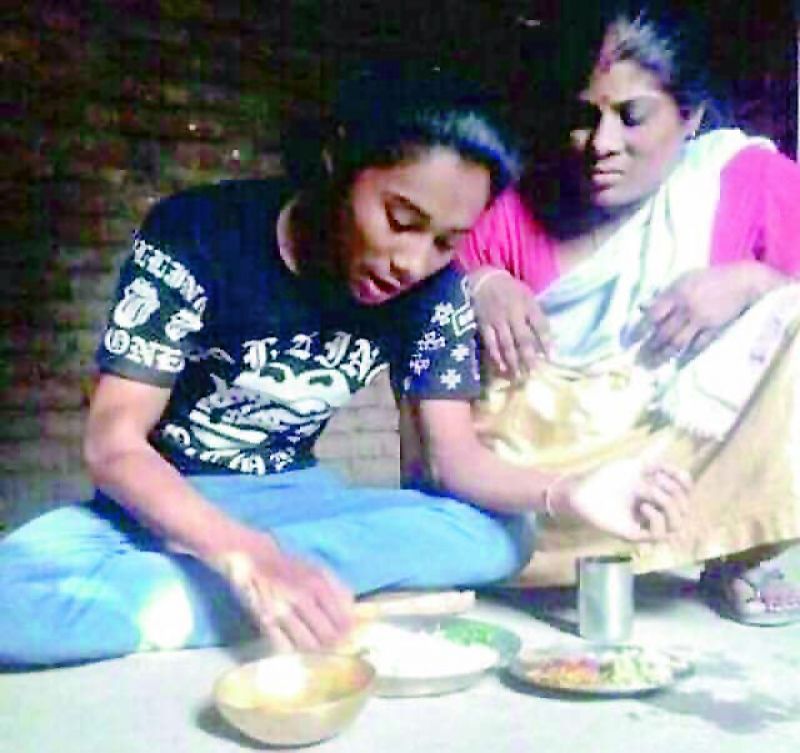 Hima having food at home as her mother watches her

On July 13, Hima Das created history as she became the first Indian athlete to win a gold medal at the IAAF World U-20 Athletics Championship 2018 in 400 metres at Tampere in Finland.

Her success story is nothing short of a Bollywood biopic. “She was fond of racing with any car coming to her village,” says her neighbour Ratneswar Das, who saw Hima growing in the nearby cattle-field-cum-playground. “Whenever we tried to tell her that it was dangerous, she would say that she was testing her stamina with a speeding Sumo,” say her neighbours, who have been tirelessly narrating their memories of Hima to the hundreds of visitors who have been flocking to the village since her historic win.

In fact, once a hotbed of insurgency, Dhing, Hima’s hometown, has now got a new identity, with the residents helping the family attend to visitors since Friday. 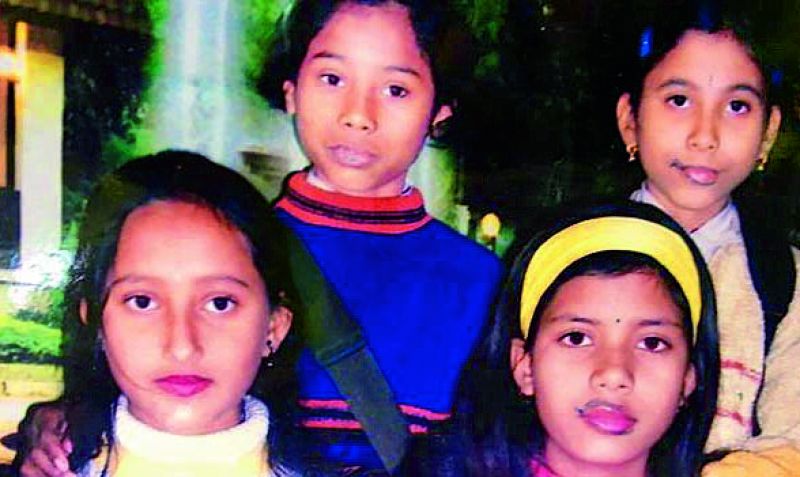 A childhood photograph of Hima Das (in blue sweater)

Hima was first spotted by a teacher of Jawahar Navodaya Vidyalaya in Assam’s Morigaon, Shams Ul Haq, in 2011-12 when she visited the Central Government-run school for a sporting event. “She won all the athletics events,” says Hima’s father, who admits that due to financial constraints, he was reluctant to send her outside.

In just over a year, she became a district champ but it took her almost two years to reach the state-level competition. In early 2016, she won the 100 metres race at the State Championships and later that year, made it to the finals of the Junior Athletics Championship in Coimbatore without any training.

“Prior to this, Hima was in a village where she had never seen a synthetic track,” says her coach Nabajit Malakar.

In January 2017, when the Directorate of Sports organised a camp for budding sportspersons, Hima impressed everyone again.

While there, coach Nipon Das saw Hima and asked her to shift to Guwahati for better training. However, her parents were reluctant to send the young girl. “I went to meet her parents and realised that financial constraints were discouraging them from sending her to Guwahati. However, I managed to convince them and arranged for her accommodation in the state capital till the government provided her accommodation at the Sports Academy in Guwahati,” says Nipon Das, who knows that her challenges are less now.

“She needs to focus on her training. She will go a long way,” says the proud coach while recollecting, “She did not have even proper spikes then, but she always said that she would not disappoint us.” Nipon is waiting for Hima to return, as he adds, “I always told her: Don’t run after medals, run after time.” 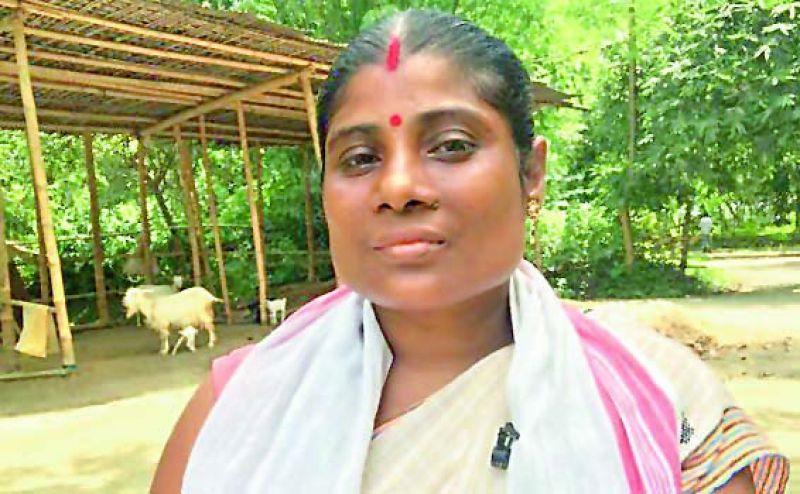 Interestingly, Hima was preparing for the 100 and 200 metres race. But the shift to 400 metres came when her coaches noticed that she used to start slow and peak at the end, making her a perfect choice for a 400 metres sprint. It was in May 2017 that Malakar and Nipon Das made her run 400 metres in Guwahati for the first time, when Hima clocked 57 seconds. The rest, as they say, is history.

Sports journalists comment that Hima has never looked back at her past. “The one thing that I don’t want to speak about is my past right now,” she told sports journalists in Finland. “Everybody has difficulties in life. But if you have to win something for the country, you have to struggle. I don’t care how my past was or what I had to go through. Forget the past and ask me what’s next,” says the victorious athlete. “She may sound bitter about her roots but she is just like that,” says Vijay Bora, a senior sports journalist from Guwahati.

Hima’s mother, who has been busy giving interviews and welcoming guests at her home in her village Khadulimari, has not forgotten to thank God for everything. Recalling those early days when Hima used to go to play football, Jonali Das says, “In every match, she used to score goals for which she got some cash rewards. She would always give me all the money. But whenever she required money, she would demand it from her father.” The proud mother says she doesn’t want to recall those challenging moments when very few people were with them in support.

Meanwhile, Hima’s cousin, Joy Das, provides insights into another dimension of her life. “She was equally concerned about social issues and joined a drive started by women to demolish the local country liquor shops of the area,” says Joy, describing Hima as a “stubborn girl” who refused to pay heed to advice not to play football with the boys. 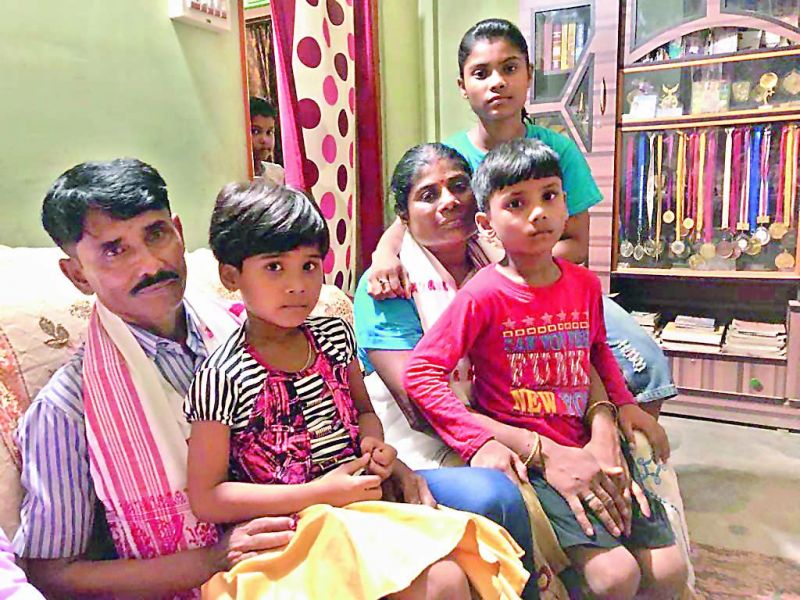 Hima’s spectacular achievement in Finland has showered her with awards. Assam chief minister Sarbananda Sonowal announced a cash reward of Rs 50 lakh for Hima, who scripted history by becoming the first Indian athlete to claim gold in an international track event. The Assam Athletic Association and Assam Olympic Association have also announced cash rewards of Rs 2 lakh each for the young athlete while former Assam chief minister Tarun Gogoi has announced an award of Rs 1 lakh.

In recognition of her grit and perseverance, Karnataka Deputy chief minister G. Parameshwara has also announced a cash award of Rs 10 lakh on behalf of Sri Siddhartha Academy of Higher Education (EOM) to the Golden Girl, as a token of appreciation for becoming the first Indian woman to win gold at the U-20 World Athletics Championships. It promises to be a happy homecoming for Hima.