The Grande Tsingy is not for the faint-hearted. And when you reach the top, you are left in tears at the sheer beauty of madagascar’s adventure trail. 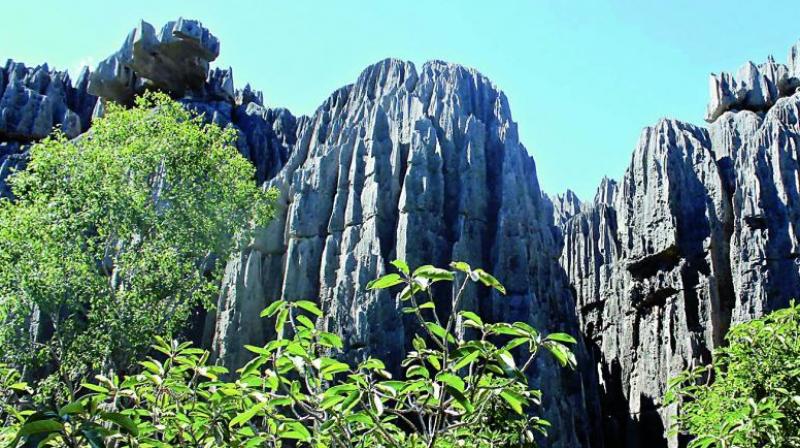 The dramatic forests of limestone needles enveloped us from all sides, deceptively tantalising and petrifying us, in equal measure.

Standing on the platform of the Grand Tsingy, panting, we were seized by emotion as we witnessed the most spectacular sight of our lives. Tears welled up. Our heart-rates accelerated, despite having withstood the pressure of a four-hour ascent to reach this magnificent spot. We were momentarily speechless. “Fantastic, just fantastic!” Paul exclaimed. We collapsed onto the platform not trusting our legs to prop us up any longer. The dramatic forests of limestone needles enveloped us from all sides, deceptively tantalising and petrifying us, in equal measure. This journey had taken months of planning and days of arduous travel. It was worth every bit of effort and money spent.  It all began when we decided to go to Madagascar to experience its rich diversity of flora and fauna. Our research unearthed many tourist spots, but the Tsingy de Bemaraha attracted us not only for its difficulty to access, but also the adventure it offered. The next step was finding a reliable tour operator as public transport is tardy and not recommended. We found Gary, an affable American running his tours from his resort-cum-office in Morondova. After numerous email exchanges, a tailor-made programme was crafted for just the two of us. The total trip spanning 17 days included all resort and national park stays, food, a four-wheel drive with driver, tour guide, and all entry and passage fees to our selected destinations. From Morondova to the Tsingy alone and back should set one back by roughly Rs 70,000 per head. The best time to travel is from June to October. 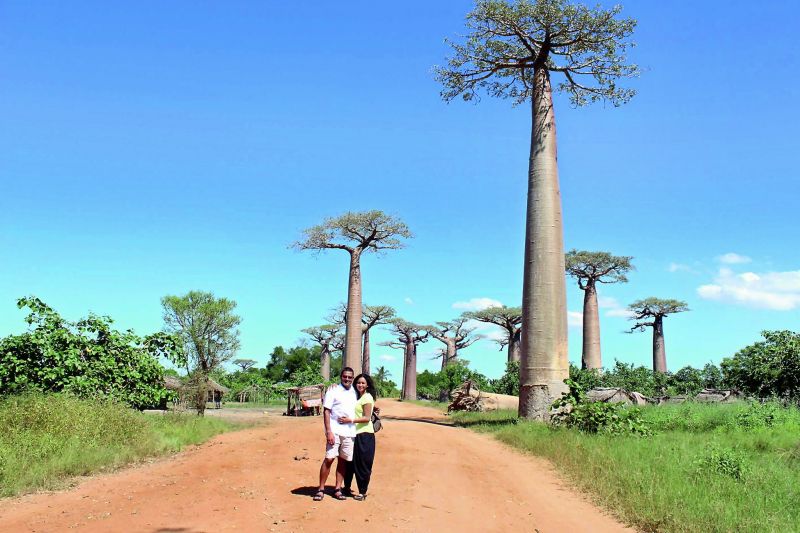 Our dates settled, we flew from Bengaluru to Mauritius, via Air Mauritius, and by the same airline from Mauritius to Antananarivo, the capital city of Madagascar. Return tickets cost about `45,000 per person. A day’s halt at a hotel near the airport was necessary as there were only two flights a week to Morondova, via Air Madagascar. The aircraft is an unreliable, small 10-seater plane and the airfare is frightfully expensive. It costs about Rs 60,000 per person for a return ticket. It is imperative here to inform that most flights are delayed, even cancelled without notice, making the chances of sticking to the programme highly improbable. Fortunately for us, it did take off on schedule. We arrived at Morondova, where we stayed the night in the resort, along the black Mozambique channel that separated it from Madagascar.  Starting from Morondova, a town 150 kilometres south of the Tsingy de Bemaraha, after an early breakfast, we were driven for 10 hours in a dilapidated SUV through muddy roads with potholes the size elephants could fit in. We passed the majestic ‘Avenue of Baobabs’ two hours later and halted to click some photographs. Over the next eight hours, we crossed two crocodile-infested rivers — the Tsiribihina and Manambolo (with our SUV on a raft), before reaching Bekopaka, a tiny village, the meeting point with our guide. The guides are local ‘Sakalava’ tribesmen who are experts at climbing and all have done their safety courses.

The starkness of these fossilised rocks that appear like needles.

Tsingy de Bemaraha is a Unesco World Heritage site, spread over 375,600 acres. This national park is home to many endemic, endangered species like lemurs, birds, bats, reptiles, rodents and butterflies among others. It comprises two geological formations: The Grand Tsingy and the easily approachable Petite Tsingy.  The Grand Tsingy is accessible only to people who are slim enough to squeeze through tightly placed rocks and wriggle under low-roofed caves. Fitness is mandatory as it is a high level trek which is impossible to discontinue in between. After sizing us up, our guide granted us permission to continue with our adventure. The park entry fee was `700 per person plus guide fees (`1,400 each) and travel charges to the entrance of the park (`8,400 each). We retired for the night at Bekopaka to begin the climb next morning.

The roads to the Grand Tsingy are unnavigable for six months during the rainy season (November-May). It still wasn’t ready for a 4X4, so we were taken on motorbikes, at the break of dawn, through dirt roads, an arduous two hour ride over uneven land sprouting with thorny shrubs, and across many water bodies to reach the starting point of our climb. This unexpected diversion in plans could cost the tourists about Rs 8,400 extra per person, if the tour operator refuses to foot the bill.  The Tsingy is considered a sacred site by its Sakalava people who inter their dead in the caves below. 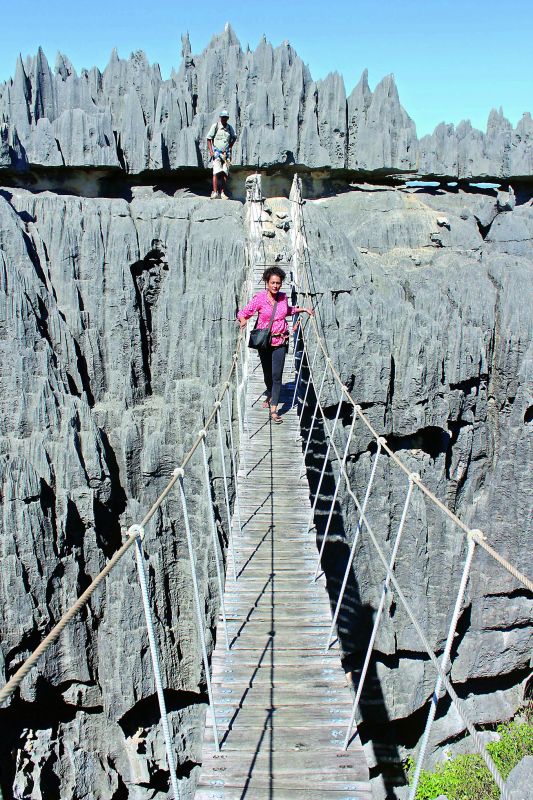 Yashoda and Paul walk across the creaky bridge.

Smoking, urinating and pointing at things is forbidden.  Standing on the ground, except for deciduous forest, nothing was visible. We started our trek by going into the forest and downwards to reach groups of large fossilized rocks. This seemed like a normal trek till about five hundred metres later, where as we entered caves we were forced to crouch low crawling on our bellies, then squeeze through tiny passages and jump across wide ravines between rocks plateaus to exit to the outside at the base. This was where the suspended aerial steel cables, the ‘via ferreta’ began, running along the exterior face of the clif. It was with the help of these cables that climbers felt safe. Pegs and rope ladders were drilled into the rocks aside it. We were fitted with a harness. The tether of our safety harness clipped to the cables, we began our climb. We traversed numerous rock crevices and narrow gullies along the way going vertically upwards for about 80 metres. The three kilometre climb took about four hours to ascend.

Reaching the summit past noon enabled us to witness the panoramic view of the famed forests of limestone needles, it’s pinnacles towering 150 feet from the base. It was a vision straight out of a fairy tale. No picture we had seen had prepared us for this reality.  This grandiose natural formation was fashioned 200 million years ago, by the play of the ocean when Madagascar drifted apart from Gondwana. The groundwater had undercut the elevated karstic plateaus to punch out fissures and caverns into the limestone. It was further patterned vertically and horizontally by local erosion to form clusters of finely pointed towers.

‘Tsingy’ in Malagasy means walking on tip toes because the rocks are sharp to touch and cannot be walked upon barefoot. A fall would have guaranteed impalement, nothing else. Yet, this is where the lemurs leap from pinnacle to pinnacle with deadly precision and technique to prevent them from getting cut by the rocks. It is their haven from being hunted to extinction since no man can access this terrain. We sat on the platform erected on top, to re-energize ourselves and take in the magnificence, of a wondrous testimony to nature’s ability to create a masterpiece that can never be replicated by man.

Our adventure was far from over we realised, when after a 20 minute rest, our tethers were clipped onto the cable lining a wobbly bridge suspended above the needle shaped, serrated rocks to get us to the other side. The bottom made with bamboo, it was attached by thick ropes placed wide apart to display huge gaps in between, effective enough to cause vertigo. A sign posted said ‘One person at a time’.The bridge swayed dangerously, creaking with every step, as our guide crossed over. There was nothing we could do but hold our breath and pray that the bridge didn’t give way, because the view from atop was terrifying. Our feet began to sweat. Our mouths dried up. We couldn’t help thinking that a fall meant not only certain crucifixion, but also non-retrieval of the body. This was a point of no return and the only exit from the summit. After what felt like eternity- taking slow steps, placing each foot solidly in front, steadying our bodies everytime the bridge swung, we landed safely on the opposite side. The downhill path was relatively easier. We reached ground level in a daze and looked up again to see nothing but few limestone rocks and the forest. Like everything we had lived minutes ago had only been a delusion. This magical world, we realised, was carved into the rocks that existed below the seabed at one time, and rose like an invisible empire that was visible only from its summit. After this, everything else remained a blur over the next few days! 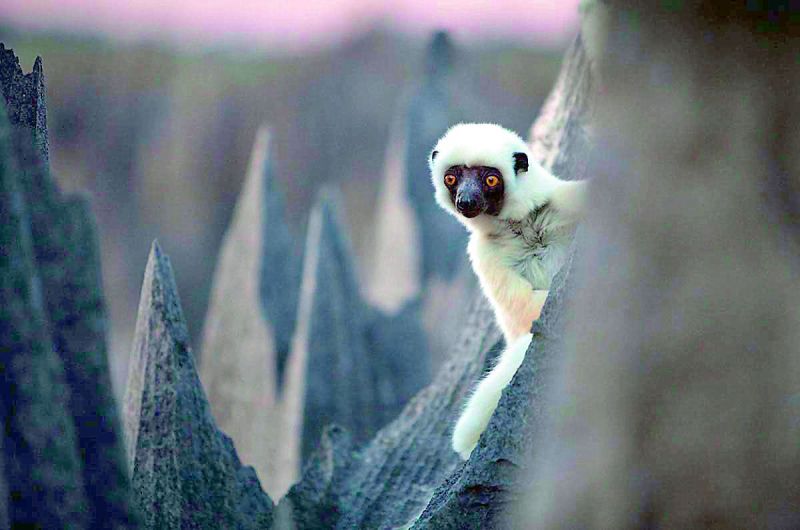 A lemur peaks from his vantage point

What is it that causes an attraction to challenges and danger in some, making them crave adventure all the time, while instilling extreme fear in others? What makes people decide whether they wish to walk on the edge or stay in a risk-free, safer zone? The answer is one word, ‘Adrenaline’. Adrenaline, is a hormone released from the adrenal glands into the bloodstream, during ‘Fight’ ‘Freeze’ ‘Flight’ moments when nerves to the gland are activated. The sudden release of adrenaline is called an ‘adrenaline rush’. It is the pursuit of this rush that makes adventurous people throw all caution to the wind and embark on a trail not meant for the faint hearted. The exhilarating feeling they experience after the completion of their goal is addictive, provides them with a sense of victory and achievement while creating an urge to get bolder, faster and more invincible. The choices available are innumerous. From sky diving, bungee jumping, zip lining, walking on transparent floors hundreds of metres above the ground, diving, mountaineering, spelunking, camping, every activity is fraught with excitement and adventure to push the limits of daredevilry.

We’d like to add words of caution here:
1) Not all adventures have to end on a happy note. Anything can go wrong. By signing the release form prior to an adventure, do know that it’s not just a formality. You may or may not return. Or you may end up like Michael Schumacher, Formula One racing legend, who has been in a coma since his skiing accident.
2) Most adventure trips involve miles of trekking. Ensure that your fitness levels are up to the mark. Wear proper shoes. Carry sufficient water, fruits/dry fruits and your phone/camera in a backpack.
3) Do hire a certified adventure company by doing sufficient research.
4) Do ensure that you study the culture of the places you visit and respect them. Be responsible not to litter or discard plastic or cans. Instead carry them back with you.
5) Try travelling with a buddy. Do let family members and friends know where you are so that they can alert authorities if you go missing.