Hyderabad on a platter

The city of pearls has been known for its delicious and rich food. Here are a few traditional Hyderabadi recipes you can gorge on. 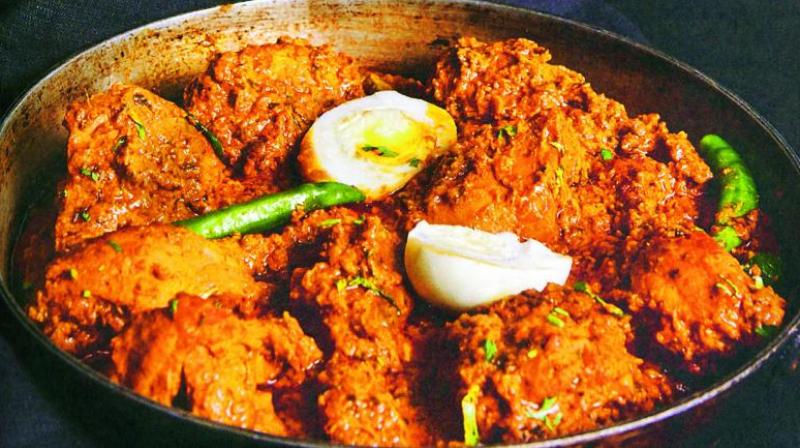 The heirloom recipes in this book are reflective of Hyderabad’s ancient, multi-cultural history and before I give you more practical tips and pieces of advice on the recipes, I thought it might be interesting to delve into some history of Hyderabad. What we recognise as Hyderabadi food today owes its origin to the Qutub Shahi dynasty which ruled over the erstwhile kingdom of Golconda for 169 years, from 1518 to 1687 before being conquered by the Mughals. Before the Qutub Shahi era, the region was ruled by the Kakatiya dynasty of Warangal and had also been a part of the Bahmani kingdom, which was based in Bidar that is now a part of Karnataka. Sultan Mohammed Quli, a Qutub Shahi king, built Hyderabad in 1580s, and was inspired by the beautiful, legendary Persian city of Isfahan.

Poets, travellers, kings and common men alike sung praises of his new city, which though ruled by devout Shia Muslims, was very secular, multi-cultural and a haven for art and literature. The Qutub Shahi rulers were also great connoisseurs of food and their cuisine married Turkish and Persian influences with local ingredients and culinary traditions. When the Mughals defeated the Qutub Shahi rulers and staked their claim over the kingdom, they chose to move the centre of power from Golconda to Hyderabad and appointed a governor for South India, with the title of Nizam-ul-Mulk. Eventually, the governor’s title was changed by the Mughals to Asaf Jah, giving birth to the Asaf Jahi dynasty, which ruled over Hyderabad for two centuries, from 1724 to 1948, when the state was annexed by a newly independent India. The Nizams were, also, discerning gourmets and brought in culinary influences from Telengana, Marathwada and Karnataka. What makes Hyderabadi food so delicious and unique is the attention paid to every detail and technique, from marinating the meat and grinding masalas to the process of cooking, and then the garnishes, as well as how the dish is served.

— Excerpt from the book

Fry the onion slices to a golden brown. Remove onto a plate lined with absorbent paper, and let cool. Mash the fried slices into a crumble and keep aside. Strain the oil into a bowl. Place the chicken in a deep bowl. To this bowl, add ginger-garlic paste, garam masala, roasted and ground spices, fried onion and the oil. Let marinate for an hour. Dissolve saffron strands in milk in the meantime. After an hour, place the chicken pieces on a flat pan or lagan. Add the marinade and sprinkle with the saffron-infused milk. Then, squeeze the juice of a lime and add a few drops of lemon-yellow food colouring. Mix everything well.

Seal the lagan with flour and place coals above and below. Cook on a slow and low flame. If you do not have a lagan, you can place the chicken pieces, marinade, milk, lime juice and food colouring in a thick-bottomed pan or vessel. Cover with a tightly-fitting lid. Place the pan on the stove, and leave the flame on high for 10 minutes. Then, reduce it to a low flame and let cook for 15-20 minutes. Check the chicken pieces for doneness. Once they are cooked, add chopped coriander and mint leaves and slit green chillies. Leave the chicken on dum for a while, until the oil rises to the surface. Serve garnished with coriander and mint leaves and, if you wish, more lime juice.

How to set yogurt
I recommend you purchase an earthenware bowl for this purpose and the yogurt will have an addictive unique flavour. Boil milk and cool till it is lukewarm. Rub a spoonful of leftover yogurt all over the insides of an earthenware bowl. Pour the warm milk into the bowl, cover and keep in a warm place to set. If you want sour yogurt, use yogurt which is two days old.

Garam Masala powder
Every Indian household has their own recipe for garam masala and this is mine. Measure out equal quantities of cardamom, cinnamon sticks and cloves. Grind each one separately into a fine powder. Mix all three together and store in an airtight jar. Make sure you use it before the fragrance fades.

Notes on buying and cooking mutton

Mutton is every Hyderabadi’s favourite meat. The day would traditionally begin with nehari, which is a soup cooked overnight with lamb trotters and tongue, eaten with kulchas. Other popular breakfast dishes are kheema and parathas, and kaleji gurda. When you are cooking with mutton the quality of the meat is very important. I have a butcher that I can rely on but still prefer to go buy the mutton myself, choosing the calf of the leg or shin bone (called adla karali or machli ka gosht). Pasinda meat, which is used in many recipes, is a steak cut with marrow bones. I am told that my father-in-law used to believe that the two people to be carefully watched are the butcher and the goldsmith. If you cannot go buy the meat yourself, please make sure that you send out for or order in from a reliable source. Mutton must always be cooked at room temperature. So, if you have stored the meat in the fridge or freezer, make sure you thaw it well in advance. It is also best cooked on a slow flame. 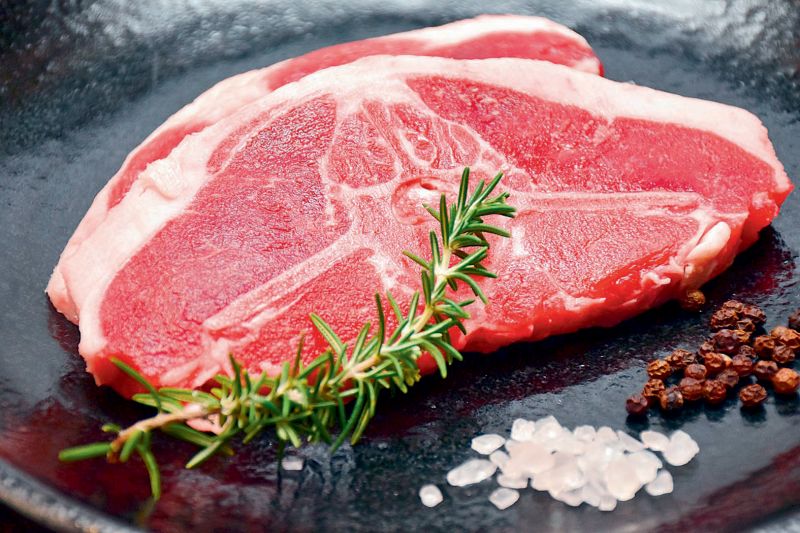 You will need a good-quality mortar and pestle to get the desired consistency — it is impossible to achieve it using a blender. 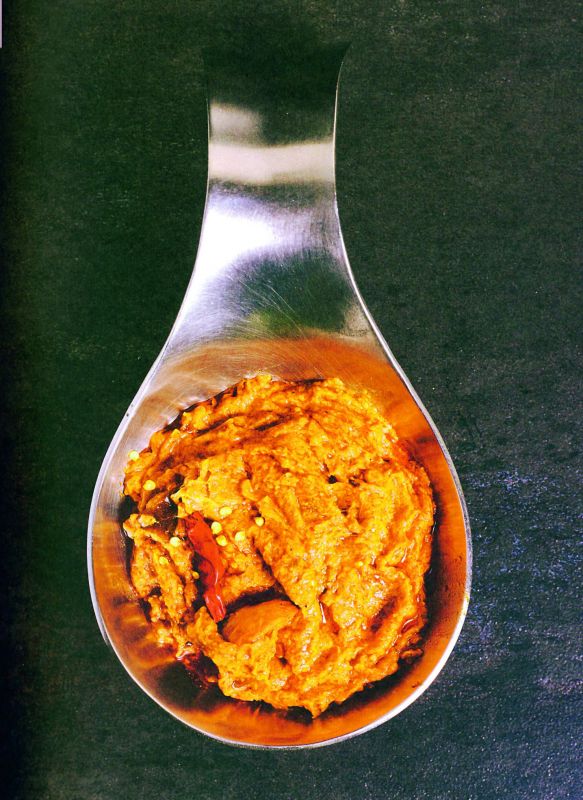 Clean the meat and cut into small cubes. Wash with salt and set aside in a plastic container. Heat oil in a deep pan and then lower the flame, and add a pinch of cumin seeds, a few curry leaves and a garlic clove. Mix in the masala you have roasted and ground; sauté until fragrant. Add in the meat, cover immediately and let cook in its own juices, When it softens, uncover the pan and allow the liquid to form a thick gravy. Wash the mortar and pestle, and make sure it’s clean and dry.

When the meat is cool enough to work with — but not cold — start grinding it, a cupful at a time, to a fine paste. Let this paste cool completely in a deep bowl. To add the tadka, heat the oil in a frying pan and add all the ingredient. Allow the chillies to fry well, until nearly charred. Pour this baghar over the ground meat and cover the bowl immediately. Set aside for two to three hours to allow the flavours to combine. Store in the refrigerator. Take each serving out just before you’d like to eat it, and warm it either on a low flame or in the microwave.

In our early years in Delhi, after I’d mastered the biryani and could cook a spread for dinner, we still ordered the dessert. Peter liked to serve phirnee, which he would get from the Old City. It was delicious, of course, and I would often ask him if it was expensive but he always said no. And then one day, the man delivered the phirnee when I was home alone so I asked for the bill. It turned out to be `11 per bowl, which was a lot in those days. I decided right then and there to learn how to make phirnee.

As it happened, I’d seen a recipe for it in a magazine, but now I’ve forgotten which one it was. The next time Peter was out of town, I tried my hand at making phirnee and my father, who was visiting us at the time, said it was very good. He thought it was even better than what we ordered from the Old City, which boosted my confidence. Before our next dinner party, I told Peter not to order dessert. I made the phirnee and served it in earthen bowls, arranged very prettily on a big platter decorated with rose petals. It won me many compliments and the recipe I found by chance in a magazine is now one of my favourites. It makes enough for 15 servings. 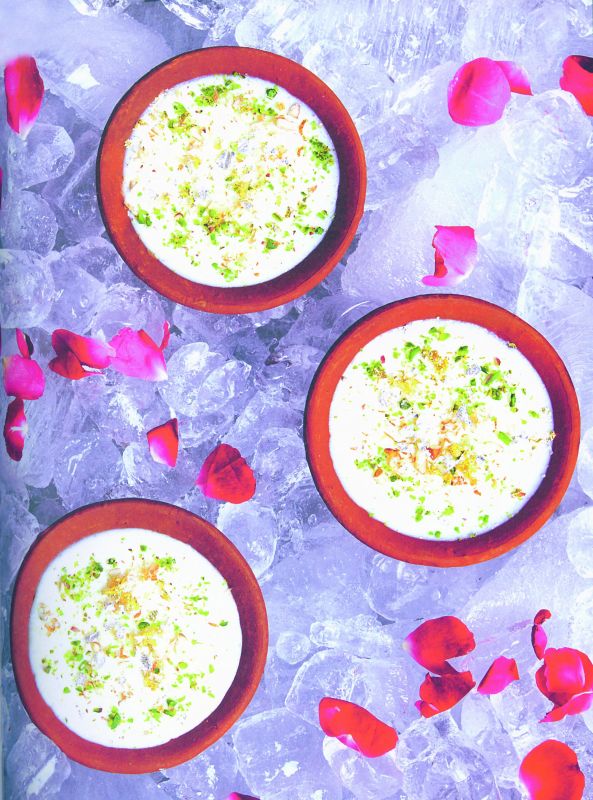 Wash and soak rice for an hour. Then grind to a very smooth paste and keep aside.
In a large, thick-bottomed pan, put the milk to boil. once it comes to a boil, take the pan off the flame and mix in the ground rice.
Return the pan to the stove and allow the milk and rice mixture to thicken, stirring continuously to ensure it stays very smooth.
Mix in sugar and fresh cream as the mixture thickens. Continue stirring and cooking for 10 more minutes. Just a minute before it is done, mix in the almond essence.
Take the pan off the flame and spoon the phirnee into bowls. Cover each with a piece of varaq and garnish with almonds and pistachios.
Store this in the refrigerator or serve at room temperature.

— Recipes from the book Saffron and Pearls: A memoir of family, friendship and heirloom Hyderabadi recipes