Young India comes to the fore

India dazzled at the 21st Commonwealth Games and some of its brightest stars were a bunch of sprightly youngsters. 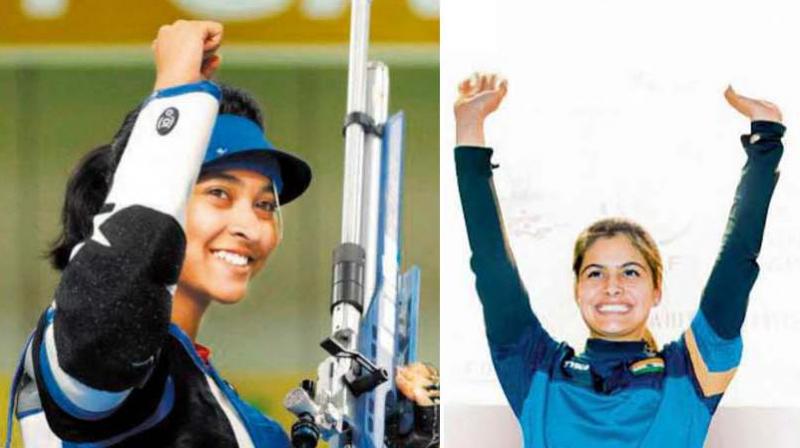 Anish Bhanwala, 15, “bunked” school in March 2018 and is now worried about his Class X Mathematics examination. The 16-year-old Manu Bhaker doesn’t want to talk about shooting and is keen to learn table tennis. Mehuli Ghosh, another teenager, skipped her Class XII examination and is now wondering how to make up!

Record-makers at the 21st Commonwealth Games, India’s future sports stars are back to business — or shall we say, their schools — just days after dazzling on the big stage and bringing to the fore India’s growing prowess in the world of sport. This and much more has been India’s underlining story at the Gold Coast Games that saw the rise of the young generation and also highlighted the credentials of its women athletes. 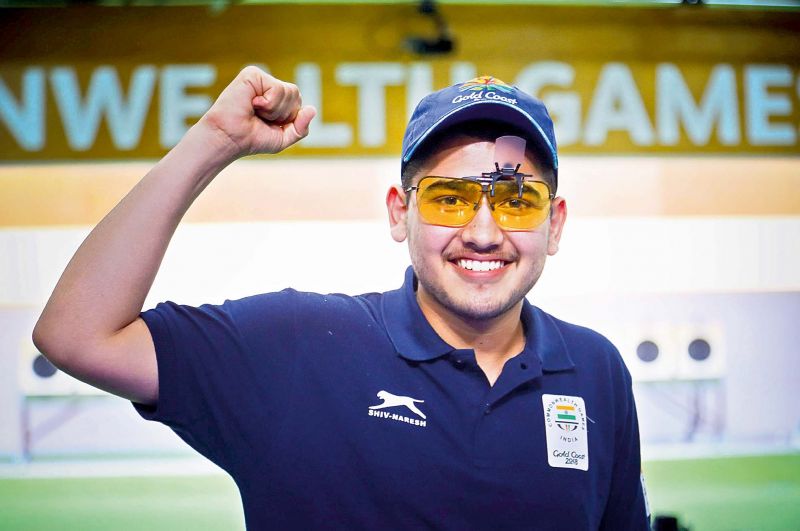 India brought home 66 medals — 26 gold, 20 silver, 20 bronze — and 28 of those came from women athletes who are now becoming the quintessential force of Indian sport and one of its heart-warming stories.

It will be foolhardy to think success at the Commonwealth Games will translate into domination at the world level or even the Asian Games in August, but a beginning has surely been made here. And while misses from the hockey teams and the needle controversy were the two glitches, these Games will largely be remembered for the rise of the young generation. And it is time to build on them. 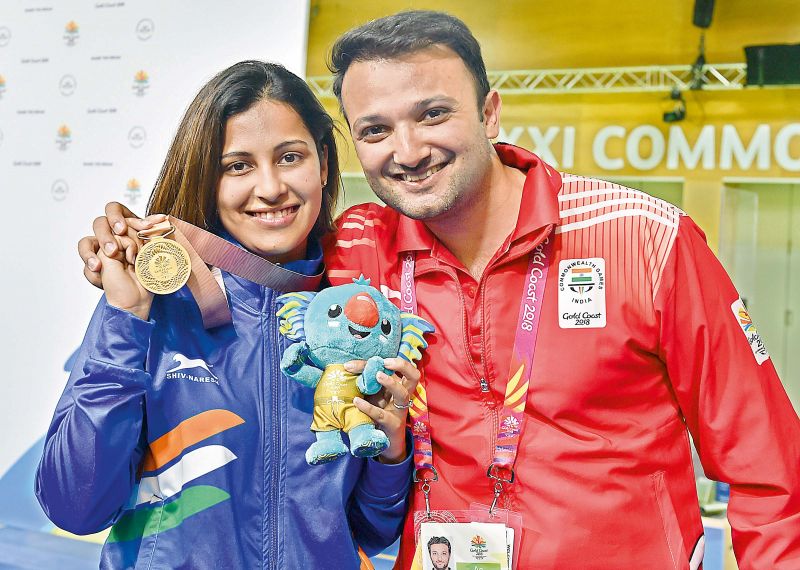 27 shooters. 16 medals and seven of them gold. India’s shooting stars shone brightest at the CWG and the standout aspect was the presence of sprightly teenagers.

Bhanwala, all of 15 and India’s youngest medallist in the Commonwealth Games history, was a picture of composure in the 25 rapid pistol final.

Bhaker, who also loves karate, cricket, table tennis, martial arts and kabaddi, shot a record 240.9 to grab the top spot in the 10m air pistol event. Asked about her success, she offers a simple view: “Shooting is an uncomplicated sport, take aim and shoot. I just work on my technique, rest happens.”

Marathi mulgi Tejaswini Sawant, 37, continued to set new standards. Her record-shattering show in the women’s 50m rifle 3 positions took her overall CWG tally to seven from four editions. Heena Sidhu and Jitu Rai proved why they are ones to look up to. The Armyman won the 10m air pistol title showcasing unflinching determination while Heena, gold medallist in 25m pistol event, credits her husband and coach Ronak Pandit for her outstanding performance.

“I owe it to Ronak for preparing me for the finals and he told me that my best will come in the finals even though my training was never this high,” she said.
For double trap shooter Shreyasi, it was her first gold at CWG — the one she put right up there, while Sanjeev Rajput claimed his maiden Games gold in the 50m rifle 3 position, ending the Indian shooters’ impressive campaign on a high. 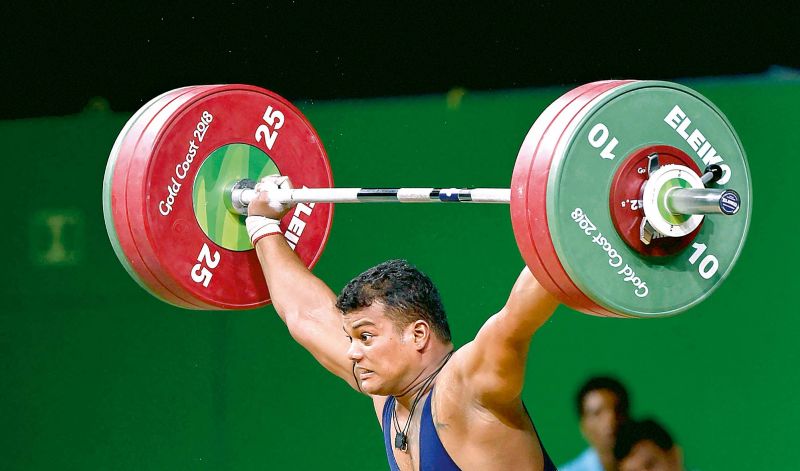 Worth their weight in gold

Weightlifters laid the foundation for India’s splendid show by winning five gold medals. The start was indeed important to instill belief in athletes whose events were scheduled later. It wasn’t a surprise that Manipur dynamite, Mirabai Chanu Saikhom, set the tone by rewriting the CWG record by lifting 196 kg (snatch 86+ clean & jerk 110) on her way to gold. Mirabai has been unstoppable in the 48 category since 2017. 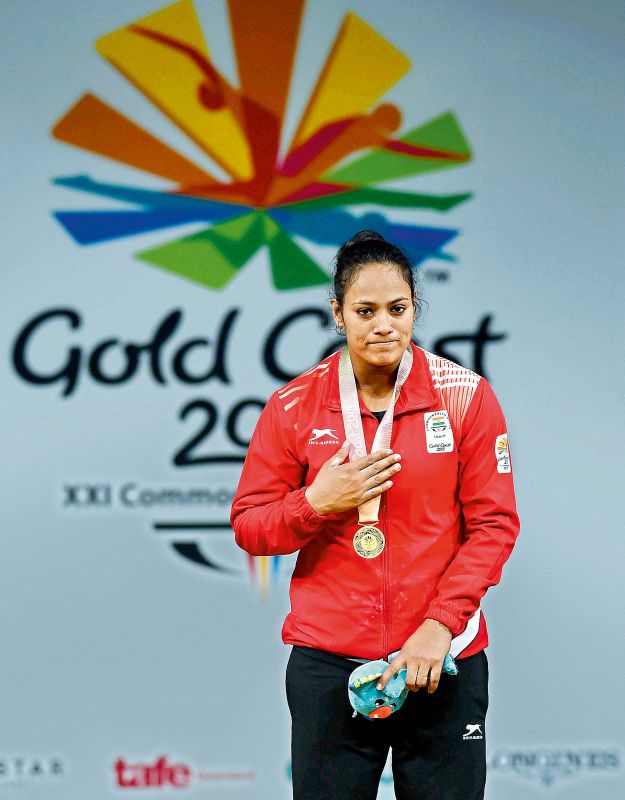 After another Chanu (Sanjita) from Manipur lifted the 53kg gold, the ironman of Tamil Nadu, Sathish Kumar Sivalingam, proved his prowess yet again with the gold in 77kg. He was the only gold Indian medallist to do an encore. “This gold is definitely sweeter than my first in 2014. A thigh injury I suffered at the national championship in January meant I wasn’t at my best in 2018. I just wanted to do my best without worrying about medals, so I was thrilled when I went all the way,” he said. 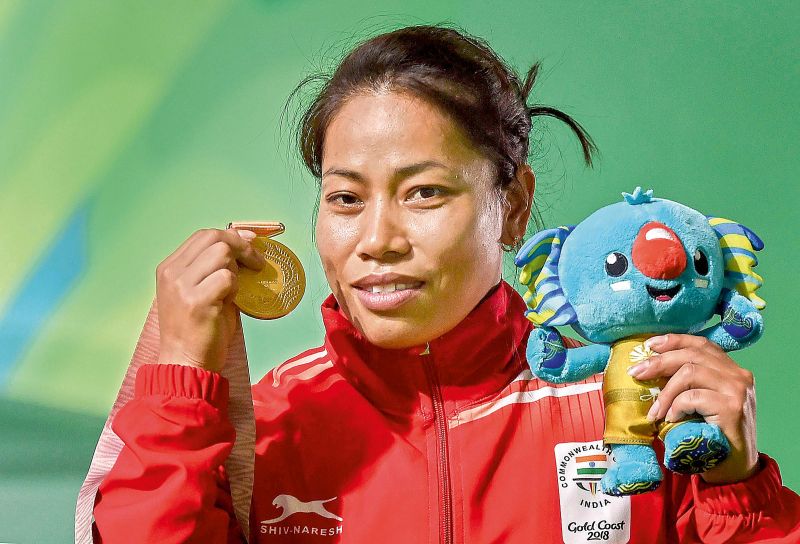 Coach Vijay Sharma highlighted how the change in diet at the camp in Patiala and hard work helped Indian weightlifters reap a rich harvest at Gold Coast. It is also incumbent upon him that all his charges remained clean all the time because doping has marred the reputation of weightlifting no end. 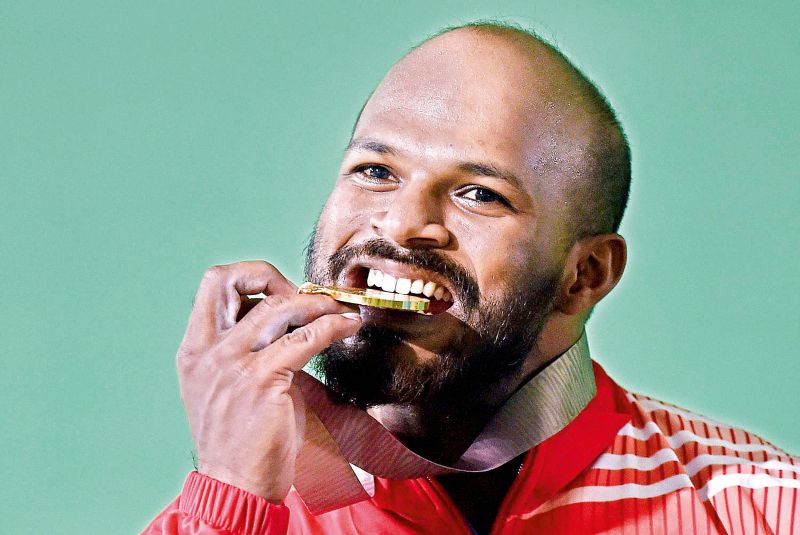 Venkat Rahul Ragala of Andhra Pradesh reached the summit in the 85kg before Punam Yadav wrapped up India’s brilliant campaign with the gold in the 69kg. 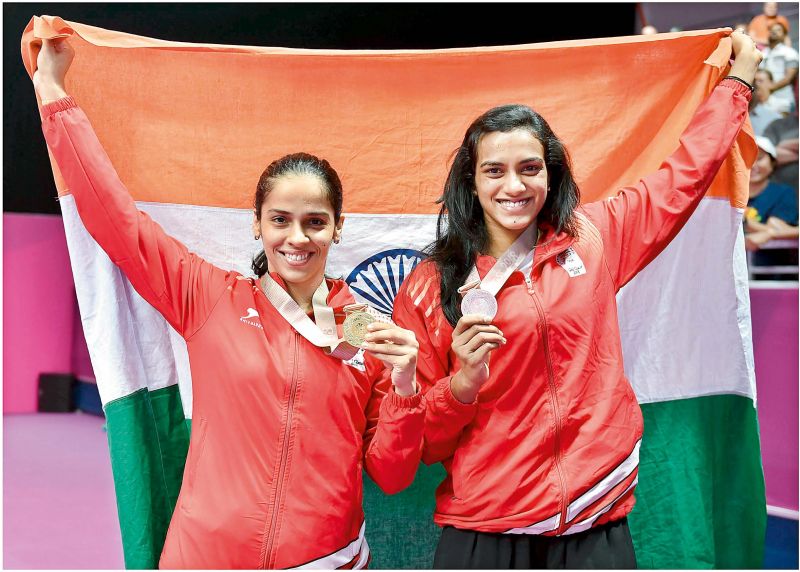 Young India comes to the fore

With Olympic silver and bronze medallists as well as a newly-crowned world no. 1 in the side, badminton was always going to be India’s best bet. The shuttlers lived up to that billing with their best-ever haul of two golds, three silvers and a bronze.

Sindhu-Saina contesting the women’s gold medal match was surely the icing on India’s cake. Srikanth came up with a silver show in the men’s section.

The star power rubbed off on the second string as well, spurring the likes of Sikki Reddy, Rankireddy Satwiksairaj and Chirag Shetty to punch above their weight in the doubles category, not to forget the accomplished Ashwini Ponappa who played the senior’s role to perfection.

While the Sainas, Sindhus and Srikanths were expected to be among the medals it is the emergence of the younger lot, especially in doubles, that is heartening. Satwik and Chirag, aged 17 and 20 respectively, went all the way up to the final to claim India’s first ever medal in men’s doubles. Sikki and Ashwini snared the women’s doubles bronze with commendable performances. Seasoned Ashwini carried a massive load and played as many as four matches on a particular day.

Like Satwik (son of government school teachers in rural Andhra Pradesh), Sikki too has moved from interior Telangana to Hyderabad to pursue badminton at Gopi’s Academy.

A historic gold medal in the team event was a massive plus. National coach Pullela Gopichand acknowledged, “The team gold was the highlight. To beat Malaysia was big… fantastic,” he said.

The Indians have arrived. 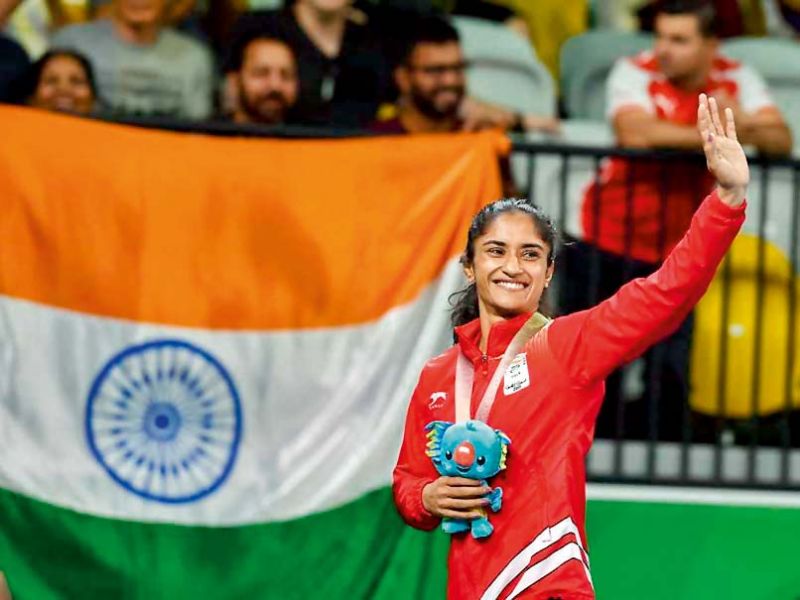 Of the nine medal-earning sports, wrestling provided India the second highest haul of medals at the CWG. The grapplers maintained a 100 per cent record with all the 12 landing medals — five golds, three silvers and four bronzes.

However, in stark contrast to the affluent shooters, the wrestlers came from impoverished backgrounds. Life will take an upward swing though for at least nine of them who hail from Haryana with the state government announcing hefty cash awards for the medal winners. Leading the charge at Gold Coast was one with the most popular name in women’s wrestling in India — Vinesh Phogat, daughter of wrestler and Dronacharya award winning coach Mahavir Singh Phogat’s younger brother Rajpal. She snatched gold in the 50kg freestyle category. Her cousin Babita Kumari came good as well, wrangling silver in the 53kg event. It was a tribute to their father and uncle who fought odds and overcame opposition from the community in Haryana to get the girls into the wrestling ring. With their success on the international stage, the five Phogat sisters-cousins have triggered a change in mindset and attitude towards girls in Haryana.

Pooja Dhanda made a late push in the women’s 57kg final to take silver. She was originally selected to play the role of Babita in the Bollywood blockbuster Dangal but was forced out due to an injury. She later went on to defeat Babita’s sister and women’s wrestling pioneer Geeta Phogat at the national championships. But the most gripping of the stories has to be that of Divya Kakran, who grabbed the women’s freestyle 68kg bronze. In Delhi, Divya’s father Suraj sells wrestling briefs stitched at home by her mother!

Bajrang Punia punched the big ticket in the 65 kg category. The 24-year-old Arjuna awardee works as TTE with the Indian Railways. All that could soon change as the Railways has hinted at out of turn promotions to outstanding athletes. Two-time Olympic medallist Sushil made it a CWG gold hat-trick by winning the 74kg event to go with his yellow medals from the 2014 and 2010 editions. That’s some drive from the son of a bus driver in Delhi who is an assistant commercial manager with the Indian Railways. 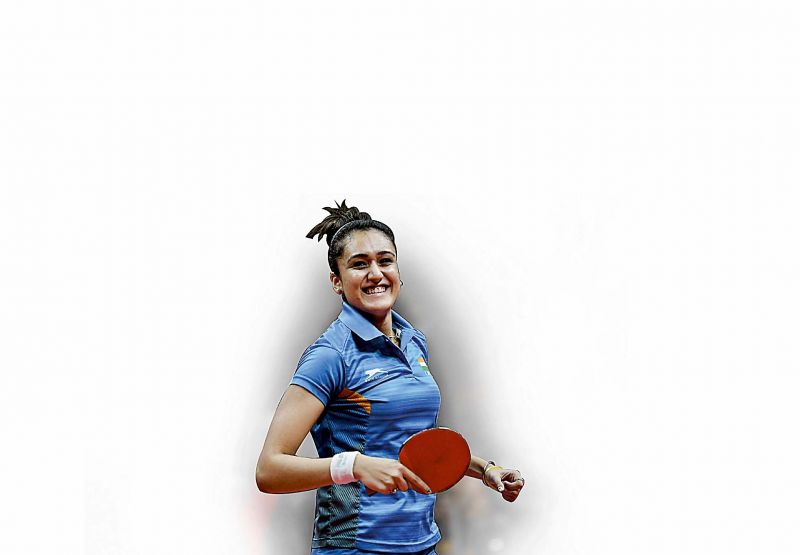 Batra was in her zone as she helped India scoop their first ever team gold medal in the women’s category. The icing on the cake was beating Singapore, who had not lost the top place since 2002, 3-1 in the final. The gritty Indian edged out Feng Tianwei, world no. 4 and multiple Olympic medallist, to pave the way for an unlikely gold.

Batra’s stellar show marked Indian TT’s coming-of-age in the women’s category. She ended her unforgettable CWG campaign with a bronze medal in the company of G. Sathiyan in mixed doubles.

The men, who won three medals including the team gold, were in awe of Batra. “She inspired us to win the team gold. Beating Singapore was no mean task,” Sathiyan said. 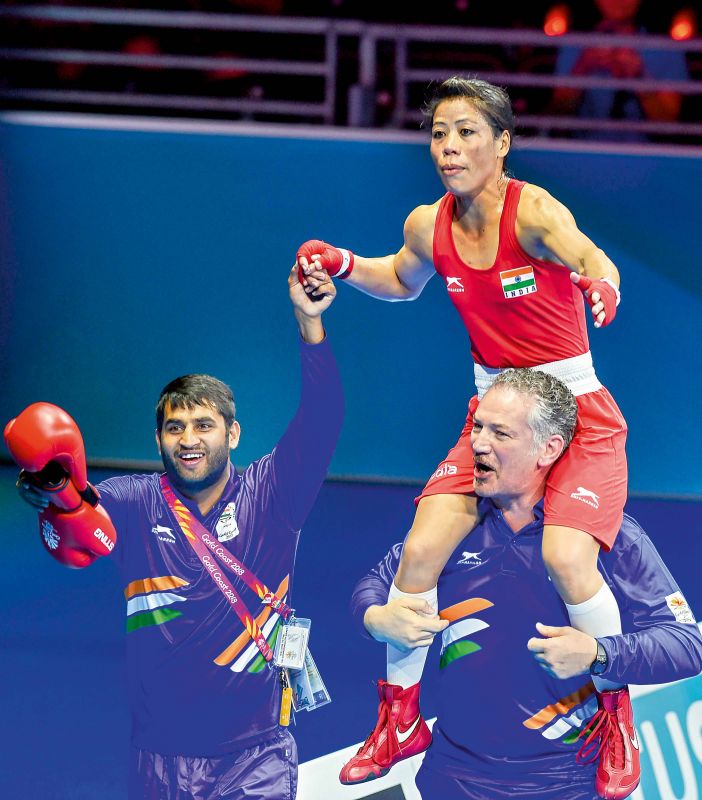 Mary Kom: A beacon of hope

She wins gold medals with such ease and regularity that the one at CWG comes as no surprise! Mother of three,
M.C. Mary Kom was a dominant force in the boxing arena along with Gaurav Solanki and Vikas Krishan Yadav.

Mary, who cannot wait to reunite with her sons, credits her fitness and speed for her unyielding success and says she will try and carry on till the 2020 Tokyo Olympics.

“My dreams are not fulfilled yet because (no) Olympic gold medal,” she said. “So if my body allows, I will go.” 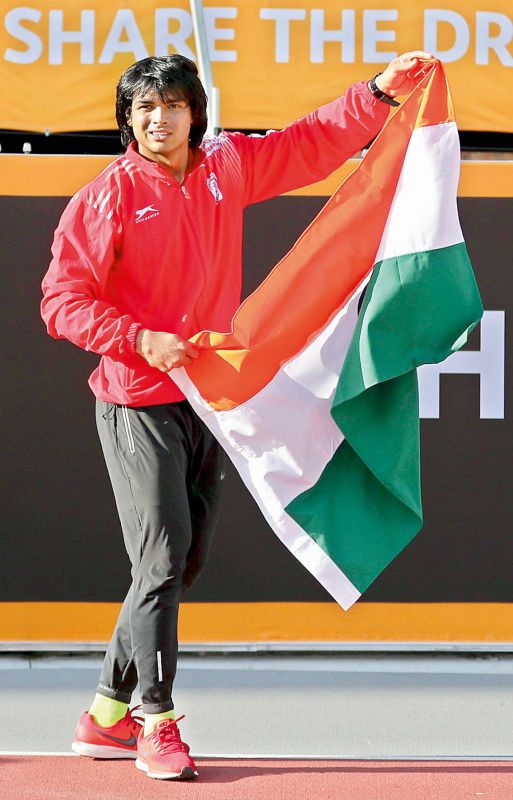 It was left to an implement, weighing 800gm, to salvage India’s pride in athletics. The strong right arm of Neeraj Chopra, who learnt the nuances of javelin throw through Youtube, didn’t disappoint as the 20-year-old from Haryana smashed the field to smithereens on his way to a splendid gold medal. That his best three efforts would have been good enough for the gold demonstrated how dominant he had been.

Neeraj, who burst on to the scene with a sensational gold at the 2016 world youth championship, was in the mood at Gold Coast. The gold medallist’s best of the day, 86.47m, was just one centimetre short of his national record. Neeraj has reinforced the faith of athletics aficionados in the country that he is the chosen one to break India’s Olympic duck in track and field.

Seema Punia and Navjeet Dhillon provided some crumbs of comfort to India by grabbing a silver and a bronze medal in the discus.