The social media has been another medium for musicians to showcase their talent. 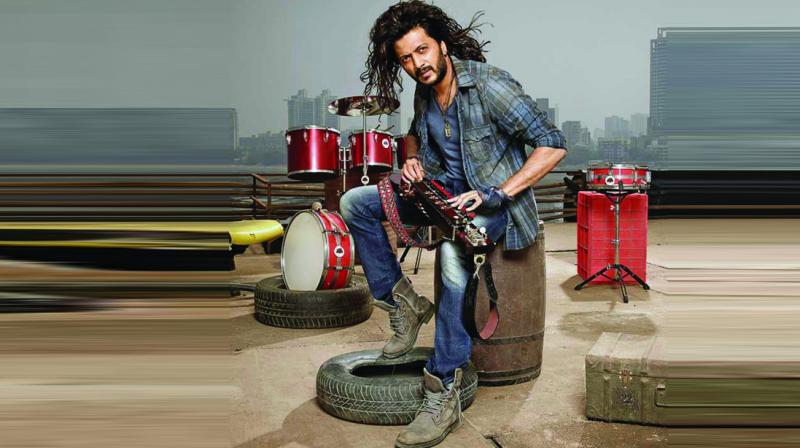 Riteish Deshmukh played a banjo exponent in the film Banjo

Last September, Riteish Deshmukh played the exponent of a Banjo, in a film by the same name. It sank without a trace, much like the instrument that is threatening to disappear from the music scene. Though once a principle part of celebrations, especially Ganesh Chaturthi, and also widely played during qawwali performances, the banjo is edging towards extinction.

Unfortunately, it’s not the only one. Several musical instruments like the sarangi, the accordion and the mouth organ, which were once indispensable on stage, are being sidetracked in this digital age. A few exponents of these however, still exist — not all of them are professional musicians, but share the love, respect and a high degree of proficiency in their respective instruments.

While Raman Iyer plays the mandolin, an eight-string fretted string instrument (which looks a lot like a guitar) as part of Neeraj Arya’s Kabir Café, physiotherapist Dr Deepak Kachalia’s banjo gathers dust through most of the year. Music teacher Amitabh Chakraborty’s mouth organ has also mostly become a hobby to be pursued at leisure.

On the other hand, Ashok Sen, who used to play the accordion, has kept the public interest in his instrument alive by insisting that he play a couple of sets using this instrument along with his usual keyboard pieces. Pt Dhruba Ghosh, a renowned sarangi player, has dedicated years of study to create a whole new repertoire of sarangi music, which takes it from being an accompanying instrument to a lead instrument. 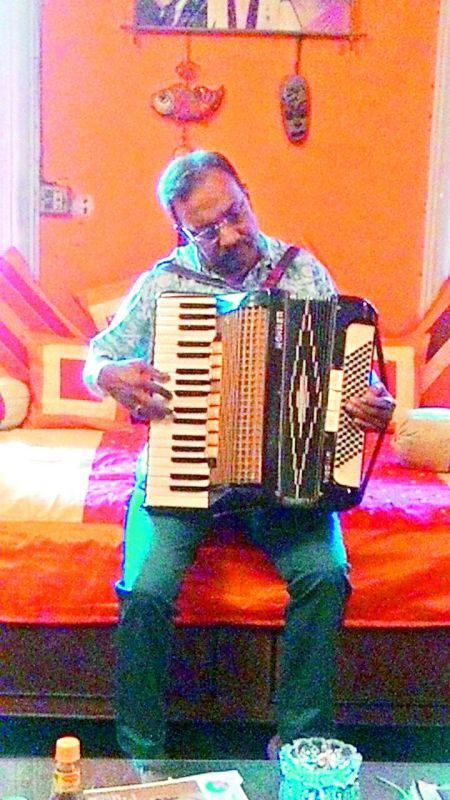 While even five years ago, these individuals were despairing that they would probably be some of the last musicians to play their instruments, most now agree that a new era of revival might be upon us. “This is the best time for instruments to make a comeback because the visual medium is coming up. Five years ago, even I was thinking that you could play everything on the keyboard, so why would one need any other instrument? But the live scene is coming up again and you want to ‘see’ musicians playing their instruments than hear the keyboard onstage. The electronic music scene also fuses the trance tunes with that of rare instruments like the belabahar or percussion instruments like the jambe or congo,” says Raman, adding that a number of well-known music composers and singers, like Vishal and Shekhar, Arijit Singh and Sachin Jigar, have taken to performing with a live orchestra once again.

Ashok, who has been in and out of the music scene in Kolkata for over four decades, cites instances where old instruments are being revived. “I was very happy to hear the accordion being played in Itti Si Hasi in Barfi. A trained ear like mine can catch what is the actual instrument and what is the artificial note created by a keyboard. A lot of live shows are also using orchestras again," he says.

The social media has been another medium for musicians to showcase their talent and, among the forerunners of these online projects is the India Jam Project, helmed by composer Tushar Lall. Tushar takes popular Hollywood-based music themes like the Game of Throne theme or the Harry Potter background score and gives them an Indian spin using a mix of Hindustani and Carnatic instruments. “When most people think of Indian instruments, they simply think of the sitar or the tabla, because of maestros like Ravi Shankar and Zakir Hussain. But so many other instruments get sidelined, and it is these instruments that I want to showcase in my pieces,” explains Tushar, who has used the sarangi in his compositions and plans to add elements of shehnai and the Carnatic veena to his future projects. “I think this is more of a rediscovery of musical instruments, rather than a revival. The instruments are so exquisite in themselves that I believe they will always be around. They’re just being brought back to the mainstream now,” he adds.

Sarangi
Perhaps one of the most historically important instruments to have been sidelined over the years is the sarangi, a string instrument that is played with a bow. Unlike with the violin or the cello where a musician presses down on the strings, a sarangi player must put his fingers between the wood and string and press upwards, making this one of the most difficult instruments to play.

“Mastering a sarangi takes as long as 15 years, so sarangi players enter the business much later,” explains Pt Dhruba Ghosh, principal of Bhavans College. “Your cuticles are cut repeatedly during the first few years and it is very painful. I was passionate enough about the sound to want to forge ahead despite the pain. I took to learning sarangi when I was 14 and became fascinated with it,” he recalls. 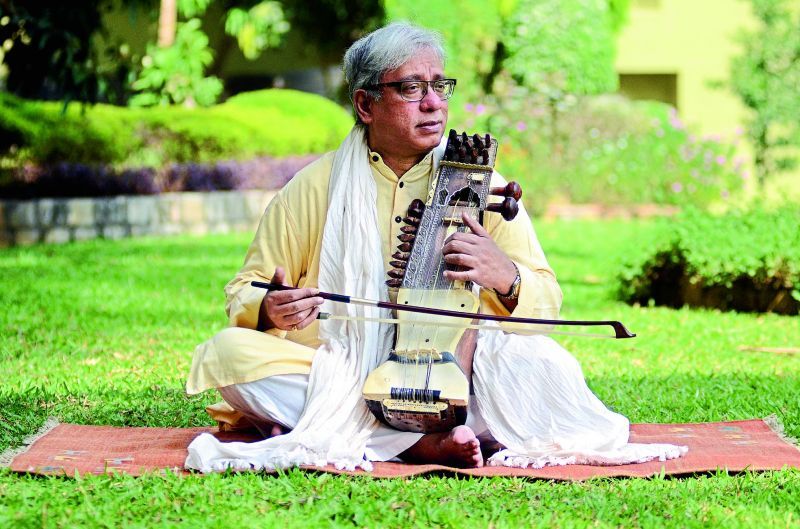 Mandolin
Another string-based instrument which is struggling is the mandolin. Raman Iyer, who plays with Neeraj Arya’s band Kabir Café, says that he learned the instrument quite by fluke. “I was studying in Ramkrishna Vidyalaya Mysore, where I got a scholarship, but we had to study electronics, art or music as a compulsory course. I am the child of a single parent and my mother could not have afforded an instrument. My warden found me crying one day and asked me what the matter was. I told him I don’t have an instrument to play. He told me that someone who had graduated the previous year had left behind a mandolin and asked if I would like to learn. Of course, I said yes, and the rest is history,” he laughs. Raman laments the fact that most people don’t pick up instruments like mandolins or banjos because they are too focused on image. “Any kid who wants to learn an instrument goes for a guitar or a keyboard or drums. You don’t think of a banjo or a mandolin when you think of a rock star image, which everyone strives for,” he explains.

Banjo
Perhaps this is why, banjo player Dr Deepak Kachalia is a full-time physiotherapist and only brings out his instrument every few months. “I used to play at our garbas and other functions before, but nowadays you can’t dance late into the night like earlier, so people don’t ask me to play at their functions much. My electric banjo has been gathering dust,” he laments. A self-taught musician, Kachalia learned to play the banjo when his brother lost interest in it. “It was bought for my elder brother but he never picked it up. I once saw a young boy playing Re Ma Ma Re Ma Ma Re and I wanted to play like him, so I taught myself. I never took classes or anything. In fact, I only play on two strings, tuned to the same frequency, whereas other players use six,” he explains.

Accordion
Another self-taught musician whose love for a rare instrument has been kept alive through electronic music is Ashok Sen, who plays the piano accordion. “My mother had a harmonium and I used to play that. I also lived quite close to the music hub of Calcutta in those days, so I observed musicians and wanted to play like them. My mother bought me my first accordion from her savings when I graduated from school and I fiddled with it till I became quite proficient. I even had my own group of musicians with whom I used to play,” he recalls, adding that he accompanied ma-ny a singer who
emulated Kishore Kumar, as well as Rani Mukerji’s mother Krishna Ray.

Harmonica
An instrument, which often accompanied the accordion in many R.D. Burman compositions, was the harmonica, more commonly known as the mouth organ. Music teacher and part-time performer, Amitabh Chakraborty learned how to play this instrument at the age of 10, with dreams of being a part of an orchestra. “The mouth organ would be leading the orchestra with a piano accordion in the background and congos or bongos as accompaniments. The mouth organ was given more respect than vocalists, unless of course the vocalist was an established singer,” he recalls.

However, with the advent of the keyboard and artificial emulation of the sounds, the orchestra became mostly obsolete. “I realised that the mouth organ was going out of fashion. I started learning singing more seriously and started to pick up the keyboard and other instruments. Now, I perform as a singer and teach singing as well as guitar and keyboard,” he says.