Even as the Indian economy makes strides towards progress, there are still some challenges that will have to be faced. 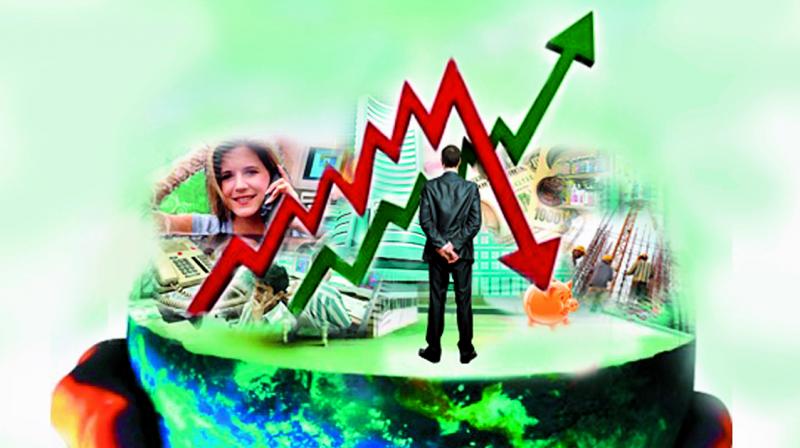 The global financial slowdown that began in 2008 and the latest Brexit episode have had an effect on India.

Ever since the Narendra Modi led NDA Government came to power two years back, the positive governance measures, strong business and international policies have not only been acknowledged by Indian economic experts but also by people of various countries.

In the race to achieve the highest growth rate, India has even been strongly challenging its neighbourhood giant — China. According to a World Bank report, India is tipped to achieve the growth rate of 7.7 per cent and may even achieve the magical figure of 7.8 per cent.

Controlling inflation — an uphill task
The areas of concern are the poor infrastructural facilities, low literacy levels, high fiscal deficit, inflation, the fear of recession in the minds of small-cap investors, increasing levels of debts in the private sector, irregularity in agricultural production and rainfall. Bad loans of various banks and black money being stashed abroad are also dealing major blows to India. In the midst of such conditions, economic heavyweight and the Governor of the Reserve Bank of India — Raghuram Rajan retired and from September 5, 2016, Urjit Patel took over the reins of the top slot. Keeping price-rise under a leash and reducing bank interest rates will be an uphill task for the new RBI Chief.

Global eyes on India to arrest economic decline
The global financial slowdown that began in 2008 and the latest Brexit episode have had an effect on India. These phenomena have also had an impact on the biggies of the economic sector.

However, due to the stability of the local markets, the adverse impact has been less as compared to the threat that was initially expected. Simultaneously, due to the drastic decline of the growth rate in the USA, international markets have turned their eyes towards India. Will the world’s largest democracy match the expectations of the people and emerge as one of the strongest economies in the world?

Will youth achieve the Great Indian Dream?
In India’s Foundation Chart, Taurus happens to be the rising Sign, which renders great stability, tolerance, latent inner power and spirit to the country. However, due to the presence of Rahu in the Ascendant, corruption has been spreading uncontrollably in the country. Rahu represents double standards, immorality, lawlessness, selfishness and conceit. On the other hand, Ketu is placed in the 7th House, due to which the relations of India with its neighbouring countries have always been strained. The placement of 5 planets in the 3rd House creates a lot of extraordinary combinations or yogas, which explains India’s amazing growth.

Major changes in education sector
The transit of Jupiter through the 5th House of India’s Foundation Chart may create a lot of instability and uncertainty. Share markets have a significant role to play in India’s economy. In this phase, investments of the FIIs and mutual funds may increase. But caution will have to be exercised because of the role of the other planets, especially that of Rahu and its influence on the 3rd House.

In this phase, base rates may increase and there may be dramatic changes in the education sector. It is also possible that universities will be given higher autonomy. On September 12, 2017, Jupiter will be changing its Sign and enter the 6th House. This time will be favourable for the medical and civil services areas.

Roadblocks expected
Throughout the year, Saturn’s change of Signs and the direct-retrograde-direct motion will be very significant for the country’s economy. During this transit of Saturn, some important decisions related to the neighbouring countries, foreign affairs, Indians residing in foreign countries, mining and coal ministry, petroleum production, gas and thermal energy, steel and other such areas might get affected. The transit of retrograde Saturn over the natal Ketu in the Foundation Chart of India may cause delays and obstacles in financial partnerships and deals. Also, the agreements which may have been signed currently may not turn out to be as favourable.

Conclusion
Overall, due to the benevolent influence of Jupiter, the economy may perform well, but owing to the negative effects of Rahu, India may have to face a war-like situation for which it will have to be prepared. In such a situation, it would be advisable to invest in tangible properties and avoid investing in intangible assets and properties.