Kranti P. Salvi, in a Guinness Record-breaking run at Berlin Marathon this year, became the fastest marathoner in a sari. 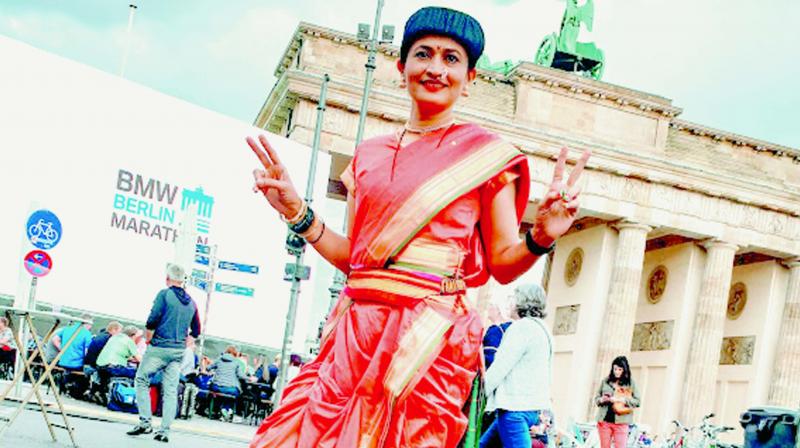 At the finishing point of Berlin Marathon, mediapersons gathered to greet the exhausted runners who literally break a sweat and records! Among the runners stood out a woman in a red cotton-silk nauvari. As she got closer to the finish line, the crowd burst into a loud cheer – ‘Kranti, Kranti…’ resembling a political rally. Like the name of the runner, it was a revolution indeed. Making her entry to the Guinness Book of World Records, Mumbaikar Kranti P. Salvi, in a revolutionary run, created history by becoming the fastest marathoner in a sari, completing the 42-km fete in three hours, 57 minutes and seven seconds.

Back at her Mumbai home, Kranti is still euphoric about her Berlin days. “More than the title, what excites me is that I could take part in a marathon alongside elite runners and multiple champions. There was a Hall of Fame event for the marathoners where I was introduced as the ‘girl from India’. I’m proud to have represented Indian culture at an international platform competing against over 50,000 participants from 150 nations,” says the Malabar Hills-based IT entrepreneur, whose aim was to touch the finish line in three hours and 47 minutes. Though she took a bit more time, she is glad to have broken the record held by Hyderabad-based sari marathoner Jayanthi Sampath-kumar.

Speaking of running, her voice booms in excitement, but Kranti confesses that the marathon spirit caught to her late in life, after marriage and motherhood. “During schooldays, my sports connect was limited to the PT hours and annual sports day. Our teacher used to enroll students for various races and since he insisted, we used to take part. Once, I was to take part in a 400-metre race, but my teacher asked me to try 800-metre event. I joined and decided to give it a try. It was tiring but I thought I would complete it anyway. And when I did, I came fourth. There were no prizes, but that made me confident,” recalls Kranti, who went on to take part in running races.

With higher education, engineering days and later, marriage, the ‘sportswomanspirit’ faded into oblivion. For two decades, Kranti took up the roles of an IT entrepreneur in her husband’s firm, a homemaker and a doting mother to Chirag. And then that life-changing incident happened. She reminisces, “Chirag was six when his teacher said he had a talent for outdoor sports and asked us to enroll him for coaching. We took him to Priyadarshini Park and Sports Complex near our home where he joined coaching and I waited in the park, keeping an eye on him.”

Unlike other parents who accompanied their kids, Kranti didn’t enjoy walking and gossiping. She could see that Chirag wasn’t focusing; he was looking at the birds and trees around while her eyes remained fixed on the beautiful track in the complex. Unable to take the confusion any more, one day, she walked up to the coach an asked if she could join the classes. Laughing, she says, “The coach was surprised, but told me it was a space for athletes and not parents. I said I am one. To prove it, he asked me to go for a round. And when I did, he took me in.”

As the training progressed, she decided to take part in the Mumbai Half Marathon that year. Her husband Captain Pramod Salvi too joined her. Together, they completed their respective tasks. That gave her more confidence. “I was waiting for the next marathon and in 2013, I ran my first full marathon; my aim was to complete the 45-km run which I did,” says Kranti, who, the next year, completed the full marathon, featuring among the Top 3 Indian women. Since then, she has never left the Top 3 slot in Mumbai Marathon.

Every year, the family used to go on foreign vacations. With marathon addiction, they chose marathon destinations for their annual breaks. As Kranti wanted to take part in the Boston Marathon, their destination choice was obvious. “That was one of the most beautiful and challenging marathons I have participated. The path was along the seashore, crossing hillocks and rough terrain,” remembers Kranti, who finished in the Top 10 slot.  In 2016, she won a podium at Gold Coast marathon in Queensland, but didn’t qualify as she couldn’t finish the run in the stipulated time. But it was a special run for the family as all the three took part in it – 11-year-old Chirag in kids’ race and his parents in the full run.

In April 2017, Kranti qualified for the Boston Marathon and then, she set her aim at Berlin Marathon. “Getting an entry to Berlin was difficult; there was a stipulated qualifying time for Indians which was hard to achieve. Then there was the lucky draw. We registered for that and started waiting.” By then, Kranti was already famous in Maharashtra, delivering talks and giving tips to marathoners. She was part of the organising team of a marathon held as part of Gudhi Padva, the Marathi New Year. Dressed up in the traditional nine-yard sari nauvari, Kranti was meant to cheer the runners, but ended up running five kms, which she claims ‘happened with the flow’.

The photos of Kranti running in nauvari went viral and that was when the confirmation for Berlin marathon came. Encouraged by friends and family, she thought of attempting the run in nauvari. And the rest, is history! “Sporting a sari at a marathon is a difficult task – the humidity, hindrance of movement all make it tiresome. To adjust the sari alone, I took 21 halts! Though my target was three hours and 50 minutes, I could complete the task in 3:57:07,” adds Kranti, who, since then, have been invited to felicitations, classes and events on one condition – that she wears a nauvari! Laughing, she says, “I was even invited to open a sari showroom in Pune.”

Now that she has completed 10 full marathons and more than 50 half marathons, Kranti has a dream – to cover all the major six marathons in the world and become the six-star finisher. Boston and Berlin are over; Kranti is headed to New York next month to take part in the New York City Marathon. “Then there are London, Tokyo and Chicago. I’ll give it a try,” she winds up.Kranti P. Salvi