To save the Himalayas and their ecosystem, a seasonal trekker from Haryana is on a mission to clean their famous trekking routes. 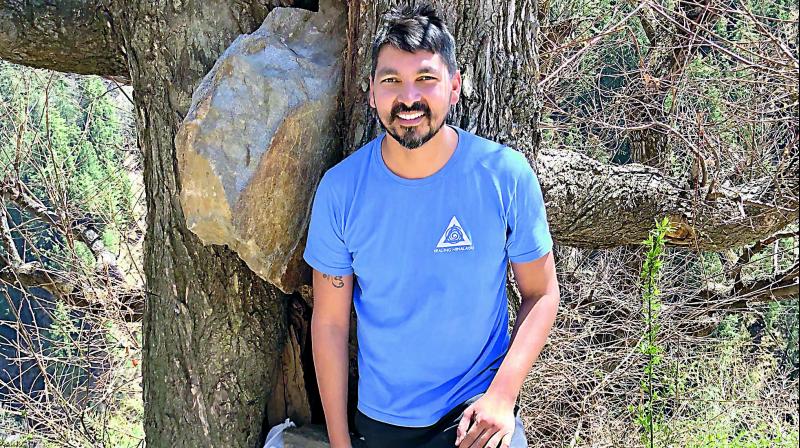 With depictions of alpine meadows, lofty trails, lush green forests and rugged terrains, films such as 3 Idiots and Yeh Jawaani Hai Deewani have lured many people into the world of trekking. While the activity promises adventure, the side affects of it on the ecosystem owing to the careless attitude of travellers, has long being ignored. And as travellers continue spoiling the beautiful landscapes of Himalayas, 33-year-old mountaineer Pradeep Sagwan from Charkhi Dadri of Haryana has taken upon himself to give back the mountains its peace. In a rather unique way to address the threat to Himalayas and their ecosystem — Sagwan has taken up the task of cleaning their most famous trekking routes on their own.

In an attempt to retain the beauty of the pristine green landscapes of the region, Pradeep founded an organisation, Healing Himalayas, in 2014 and since then he has collected more than 5,00,000 kilos of plastic and garbage from the mountains.

“I come from a humble background. So it took me a lot of time and courage before I finally became a regular in 2016,” says Pradeep who later realised that he needs more helping hands to live his vision of cleaning the mountain ranges. “I used to do it on my own but it wasn’t enough. Hence, I had to build an army of my own,” he adds.

Recalling an incident from his journey, Pradeep shares that once he had limited money and had to choose between arranging food for the team or paying for the transportation of garbage. At that point, his team decided to first dispose off the garbage  and then look for food. After that the team hiked 60km to find the nearest ATM to have their food arranged. “That’s when I realised I am not alone. So it turned out to be worst and eventually best incident for me to know that I am doing the right thing,” he says.

With the influx of mountaineers and local communities opening shops and dhabas to make money, has largely contributed to the generation of waste such as plastic bottles, wrappers and cutlery.

“According to the footfall, I decided a trek route and started my work on it,” says Pradeep who claims that his team has completely removed plastic cutlery from trek routes like Kheerganga, Shrikhand Mahadev Yatra and Prashar Rishi Lake. “I have been working on these routes for the past three years and we have completely eradicated plastic cutlery. Our next target is to remove plastic bottles, but it will take some time,” he explains. 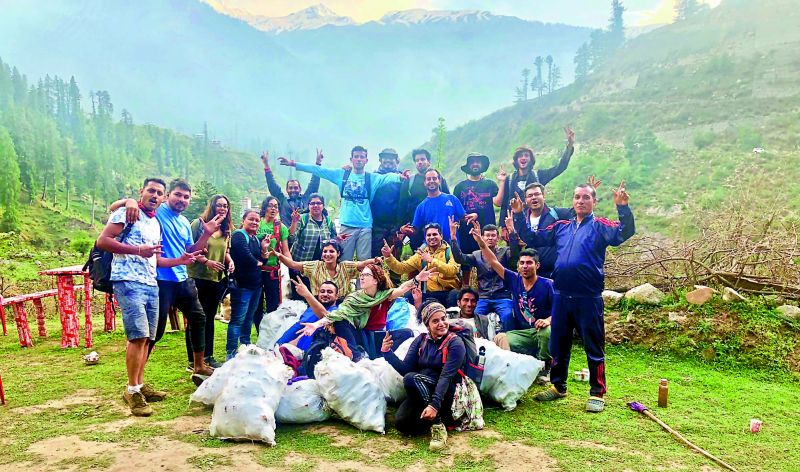 Pradeep Sagwan with his team of trekkers

A believer of education through action, Pradeep goes on hiking every weekend with other trekkers to remove non-biodegradable waste on these trails. In the process, he has also introduced tree plantation at various routes. “I have regular trekkers and volunteers. I have regular support from friends,” he smiles.

With the track record of mountaineering approximately 1,000 km, Pradeep lives a very disciplined life and his sole focus is the disposal of waste. “There isn’t any issue with exploring… but it comes after collecting waste. Disposing of waste at the source is a big challenge,” he rues.

Asked about his next mission, he reveals his intention to set up waste disposal mechanisms at various mass tourism spots by the end of 2030. “I would mainly focus on trek routes for waste disposal and at the same time I am trying to make corporate/producers accountable for the packaging they do,” says the mountaineer.

Thinking long term, Pradeep plans to adopt a village. “I am soon going to adopt a village and make it Himachal’s cleanest village to promote sustainable tourism,” he discloses. The hiker further explains, “The Himalayas is our third pole hence too wide to cover. The idea here is to lead by example and revive dying belongingness of local communities towards the Himalayas.”

Despite his valiant efforts, Pradeep’s foundation hasn’t received any aid from the government. However, a couple of private firms have come forward offering help. “A couple of corporates, which have happened to see me with my team working on a trek route, came forward to help. Otherwise, it’s too difficult and embarrassing to go knocking doors for donation. It is not my cup of tea,” he smiles.

Hailing from an Army school from Ajmer, Pradeep’s family wanted him to join the Indian Army. Little did they know that their rebellious child would one day build his own army. Interestingly, his parents had no idea of his initiative in the beginning. “I wasn’t able to tell my family about my work initially. Later, the news really shocked them and they took a lot of time to comprehend this weird idea of mine,” recalls the hiker and confirms that everyone in his family is absolutely okay with his initiative now.

Ever since he started the mission, cleaning of the Himalayas has been Pradeep’s sole focus. “I think the Himalayas need my full attention. I will continue what I am doing and speed it up a little too. The engagement of local communities will be at my priority though,” he concludes.