Tough times ahead for firebrand Mamata

Ganesha predicts that 2017 may be one of the worst years of Mamata Banerjee’s political career. 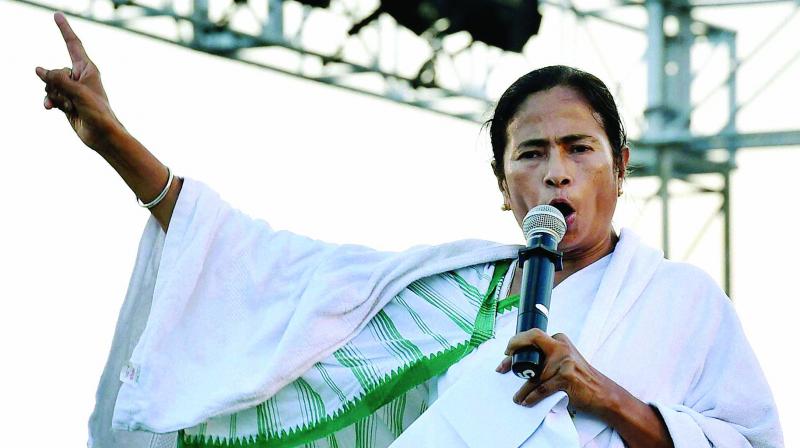 Mamata Banerjee, the influential chief minister of West Bengal and the Trinamool Congress Chief, has been in the news quite often, especially after the announcement of the demonetisation move by Prime Minister Narendra Modi. Didi doesn’t seem to conform to the idea of the drive, aimed at weeding out corruption, and has been opposing the move, stating that the decision has caused trouble for the common man.

She has always been known for her firebrand attitude. Multiple speeches, rallies and media interactions later, it is now uncertain what her next step would be. Ganesha predicts how the planets may influence her and what sort of political moves she may make in the days to come.

The autocratic power-wielder
Mamata is born with the Sun, Mercury and Rahu in the sign of Sagittarius. The presence of the trio in a fiery sign indicates that she is a naturally aggressive leader, who can take strong decisions. There would always be a strong urge within her to work for expansion and for this, she will push her own limits. The Sun-Mercury combination creates the Budh-Aditya Yoga, which indicates that she is a person of great intelligence. The presence of Rahu in the same sign indicates that she understands the intricacies of different situations very well.

The Flipside
The Sun and Rahu together indicate a self-centered personality and a heightened sense of ego. This combination can also make a person sometimes handle power in a rash and inconsiderate way, and that is why she is sometimes accused of being rude or blunt. This configuration also makes a person prone to controversies or negative publicity. Moreover, due to the Mercury-Rahu pairing, there may be problems in her decision-making and chances of logic getting clouded.

Strong support from other planets
The exalted Saturn gives her the ability to connect well with the masses and this also indicates that she will be able to enjoy the support of a loyal base. Mars happens to be the Aatmakaraka planet of her Chart, which indicates a very fiery approach to things. Mamata is a person who believes in instant action. This also shows that she is a great fighter and an aggressive activist.

Mars — the Trigger Factor
In the past few weeks, Mars was transiting through its sign of exaltation, causing a fiery reaction from Mamata’s side. This is one of the factors which may have propelled her to oppose the Government’s moves. Currently, Mars is transiting through the sign of Aquarius and she is under the influence of the Mars Return phase. Thus, she will play a highly significant role in leading the anti-government crusade.

Influence of Mercury
The transiting Mercury is moving over the natal Sun and Rahu. Mamata will also be under the influence of Mercury Return phase till January. She will not be in a mood to give up and will be quite expressive about her views. She is likely to interact with the media more frequently in the coming days.

The strong lifeline
Ganesha says that the transiting Jupiter through Virgo will help her sail through tough situations and retain her influence. Jupiter will also bring balance and allow her to take decisions based on practicality.

The road ahead
Mamata is likely to emerge as one of the strongest regional leaders in Indian politics. But the transiting Saturn in Sagittarius may not allow her to expand her influence at the national level and will force her to consolidate her position at the state level. Also, Saturn is likely to bring some unfavourable consequences, particularly after November 2017. She is likely to experience some tremors after April 2017. Considering various planetary influences, Ganesha feels that 2017 will be one of the toughest years of her political career.