Deepika Padukone made her ‘stand’ clear without uttering a word, by merely standing in solidarity with the injured JNU student. 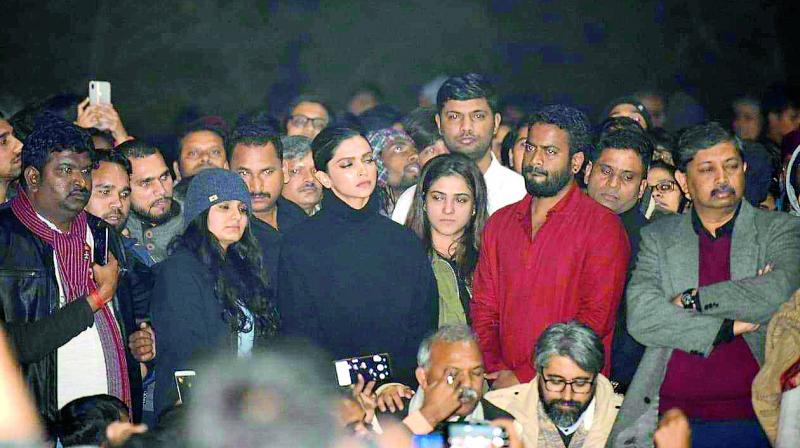 Actor Deepika Padukone had made an unannounced visit to the JNU campus in the night last Sunday, where she greeted the injured students and stood with them in solidarity. (Photo: STR/AFP)

As the country erupts and stands divided on the Citizenship Amendment Act (CAA), multitudes of voices are taking a stand about the matter. There has been strong opposition against CAA from all quarters — intelligentsia as well as some Bollywood stars. While some B-town folks stuck to what they do best — celebrity air kissing and dissing, there were some like Farhan Akhtar, Anurag Kashyap, Swara Bhaskar, Anubhav Sinha, Richa Chaddha, Sayani Gupta, Md. Zeeshan Ayyub and others who came out on the streets to protest against the controversial law. There has been a constant demand that the A-listers of Bollywood should speak up on the matter, but so far there has been a stony silence from the highest echelons of the Hindi film industry.

Things changed overnight when Deepika Padukone braved the bitter Delhi winter and visited the injured students at the Jawaharlal Nehru University. Deepika did not utter a word, but her decision to stand with the JNU students in solidarity pierced through the silence.

Although she received immense support from certain quarters, some mischief mongers were quick to label her as “Pakistani”, “publicity stunt”. Some started a social media campaign, urging people to boycott her movie Chhapaak, while there were some goons, who spoke of throwing ‘acid on her face” in a matter-of-fact way.

This incident has once again highlighted the fact that Bollywood celebs are damned if they speak up and knifed if they don’t!

Courting Trouble
Weighing in on the matter, senior journalist, Swati Chaturvedi feels the celebrities should speak up. “They are also the citizens of the country and just like every other citizen, they also need to speak up. They have certain privileges and people have some expectations from them,” says Swati. Explaining why the stars get so much hate, she further adds, “Given that the PM has never answered any question from the time he has been in the office, people are using surrogates to vent their anger.”

Deepika is not the only one who has faced the wrath for taking a stand. There are others like Swara Bhaskar and Richa Chaddha who are trolled daily on social media for their bold political opinions. Call it a strange coincidence but actor Sushant Singh, the face of Savadhaan India crime show was thrown out of the show after he condemned the violence at Jamia Milia Islamia University and Aligarh University. Ditto with Parineeti Chopra, who was abruptly out of the Beti Bachao Beti Padhao campaign of the Haryana government. According to the latest reports, a CBI probe might be initiated against financial irregularities in Anurag Kashyap’s movies. Kashayap has been vehemently opposing the CAA and NRC.

Once bitten, twice shy
Few years ago, superstar Shah Rukh Khan and Aamir Khan were at the receiving for airing their opinion on the ‘rising intolerance’ in the country. Being an alumnus of Jamia, SRK’s silence this time is eerie. Aamir, who was one of the loudest voices in the country during the Narmada Andolan too has sealed his lips.  Talking about his take on the matter, director Mani Shankar says, “It is not fair to mock the silence or speech of some celebrities. It’s a free country and the freedom to be silent is just as important as freedom of speech. As long as we have these two freedoms, Indians are free. So let them be.”

Talking about Deepika’s visit to JNU campus, communication consultant and political campaign advisor Dilip Cherian says, “While her presence made for strong optics on the eve of the release of her new film, it does not seem that she was doing it for publicity. Our own experience of Bollywood PR suggests that film people tend to be risk-conscious when doing any film publicity. In fact, steps are taken to ensure that the PR drive sticks carefully to the book. Controversies still do erupt.”

He further adds, “In this particular instance, it was a move from the heart, a step to show solidarity. We should remember that as a producer of the film, and not just the female protagonist, she stands to lose much more. Beyond the film itself, she is already among the biggest celebrity brand endorsers, and no one would risk an unnecessary controversy and lose to negative publicity. That Deepika chose to listen to her conscience than the money she stood to lose says a lot.”

Cherian, of course, isn’t far from the truth as now it is clear that the opening collection of Chhapaak was indeed shy of satisfactory. The film opened to just Rs 4.75 crore. To put things into perspective, Deepika’s last release Padmaavat opened to Rs. 19 crore, while Chhapaak director Meghna Gulzar’s last film starring Alia Bhatt, Raazi, had opened at Rs. 7.53 crore. While there can be several factors that led to the disappointing opening, including the niche subject matter, one cannot rule out the social media boycotts and massive outrage from a certain section of cine-goers.

So, the question remains that when they have so much at stake, do they assume their responsibility and use their influence to uphold what they believe in or play it safe? One cannot disagree that Deepika’s JNU visit brought some major mainstream attention to the matter. Several celebs like Sonakshi Sinha, John Abraham, and others, who were silent till now have spoken up about the matter.

Right to Dissent
In fact, comedian Rohan Joshi on his Instagram perhaps made the most thought-provoking arguments in this debate. While he was demanding Bollywood celebs to speak up, one of the netizens asked the same question – Why is it important for Bollywood stars to speak up on such matters?

Replying to her comment, Joshi wrote: “Because Bollywood demands that these same people love them, respect them and essentially stand up for them. That is what you are doing when you buy a ticket to someone’s movie. They also spend their lives earning love and social capital by often playing Muslims and minorities and winning awards and adulation for their roles as those characters. So they have no issue appropriating their pain or the struggle that a minority goes through when it means they get a shining climax speech that makes them look good. But when the time comes to stand in real life for the people whose identities and stories they appropriate, they are silent. Or, sometimes, WITH the people who oppress these minorities. And that, my friend, is why we’re insistent on their comments. Not because we think they will be correct, but because if you want to take from people for your gain, have the spine to give back when they need you.”

Screen gods, idols, role-models, whether it is fair or not, we have bestowed the celebs with these titles. The love, adulation and a large chunk of our disposable income are dedicated to them, so it is perhaps well within our rights to expect them to voice and espouse the same ideals that their screen avatars have sworn to and often died. Apart from being influential celebrities, they are also citizens of the same Nation and what they have on stake is not very different or precious than what every other citizen in the country has on stake.
(Inputs from Sanskriti Media)