Special herbs and spices from the seven sisters of India give their cuisine a distinct taste, flavour and culinary signature. 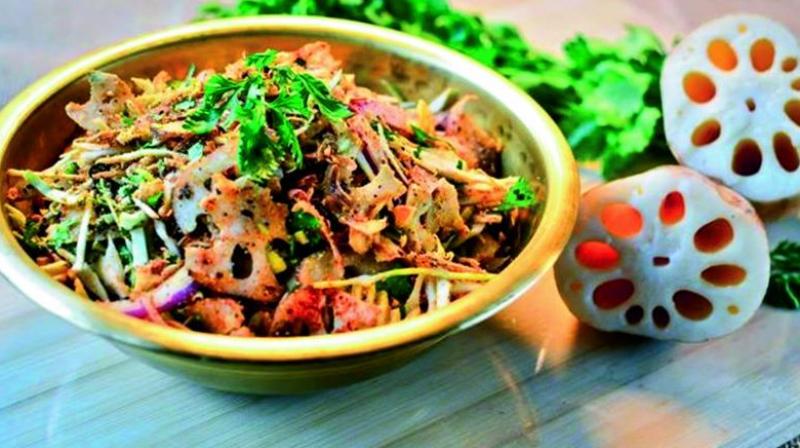 This time we embark on a journey on ingredients in cuisines from the seven sisters of India. Known for using special herbs, spices and some of the most uncommon ingredients for the food explorer, here are a few secrets straight from my table about how to use Northeastern ingredients.

Naga red chilli
Let’s start with the famed Naga red chilli — if it is the heat you want firing up your palate, go for the Naga red chilli which is the hottest of its kind in the world. Its chilliness ranges from one to 106 Scoville units (measurement for chilliness). These chillies come in shades of yellow to bright red. Mostly used to cook pork and beef, this chilli embeds a traditional flavour into pork meat.

Akhuni/Dzachie
To add more flavour and traditional tasty ingredients to the palate, the next addition is called Akhuni (Dzachie), which is a product of fermented soya bean seeds. Fermented for days, it begins to emit a distinct aroma. When this happens, grind the seeds. These ground seeds are used for flavouring meats like pork and beef, and it is also used for the stock of the meats. Dzachie adds a slight pungent and fermented flavour to the dish.

Tender bamboo shoot
Tender bamboo shoot is another delicacy in Assam and Nagaland. It is used to cook thukpa and meats like pork and beef. The bamboo juice, a cream coloured product which is extracted, is fermented and used for cooking.

Bamboo is extensively used in Assam and Nagaland for making furniture like moras, bags and mugs, and numerous household items. This is an ingredient that grows in this region only.

Nettle grass
Nettle grass (Urtica Dioica L) and locally called Lovie, is a type of leaf with bristles which causes itching if touched in its raw state. But when it is boiled and used for flavouring, it tastes wonderful. Flavour coriander with nettle grass in a ratio of 80:20 (80 coriander and 20 nettle grass). It can be used for curing cancer. It is also used to make shawls by peeling the epidermis of the bush.

Amla
Gooseberry or amla is a wild seasonal fruit which is commonly used for making pickles and jams. It is rich in Vitamin C and adds a slight tangy flavour. It is available in regular markets and is ideal for sorbets and granitas. Gooseberries have many good attributes for a cold and cough and bladder ailments.

This rice is healthier as compared to its cousin — the polished version — and has high fibre content. It is also used with corn, which is generally grown in July and August. Corn from here comes in a variety of colours, and is generally consumed boiled or roasted. I use it for making corn, khees poppers and espumas.

Naga tulsi
Nitso or Naga tulsi is used for many things including cooking, and has a pleasant aroma. It is a rare and unknown ingredient with medicinal qualities. It is used for flavouring mushroom tea and adds a pleasant flavour. Seeds of Naga tulsi are also used in food to add aroma. It has medicinal properties too, especially for high blood pressure, fever, asthma and gastric problems.

Nehii
Nehii is a seasonal fruit grown around July and August. It is quite similar to the lemon leaf, and is used for cooking. It has a very pleasing aroma and is easily available in the local markets. It can be replaced for kafir lime as well. It is used for making sorbets, flavouring curries and making cocktails.

Now that we know about such exclusive ingredients, let’s give a slight twist to our food and expose our palate to the delicacies from the mesmerising seven sisters. 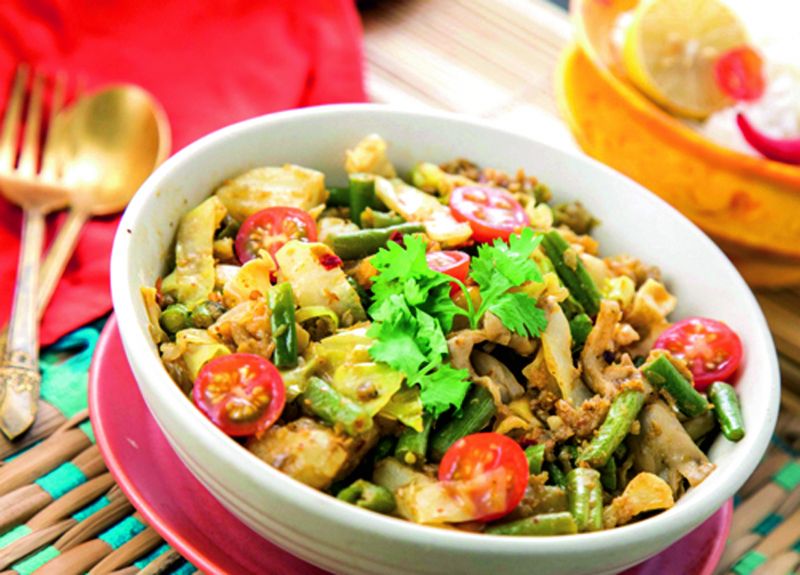 Method
Put the potatoes, cabbage, French beans and mushrooms in a pan. Pour enough water to cover the vegetables and bring to a boil on high heat.
Continue to boil until the vegetables are cooked.
Remove from heat and drain.
Heat 1 tbsp of mustard oil in pan and gently fry the dried seafood. Remove from the heat and set aside.
Roast red chillies in a dry tawa on moderate heat, till fragrant. Grind the chillies with salt to make a fine powder.
Heat 1 tbsp of mustard oil in another pan. Saute the minced onion till crispy and brown.
Crush the onion and add it to the chilli-salt mix with little water. Add this to the vegetables with fried seafood. Mix gently and heat.
Garnish with coriander sprigs and onion rings.
Serve hot with steamed rice.

Method
Slice the lotus stems finely into juliennes.
Roast the sesame seeds on a dry tawa on low heat, until they are golden brown.
Roast the gram flour on a tawa until it releases a fragrant aroma.
Combine all the ingredients in a bowl.
Garnish with coriander leaves and serve. 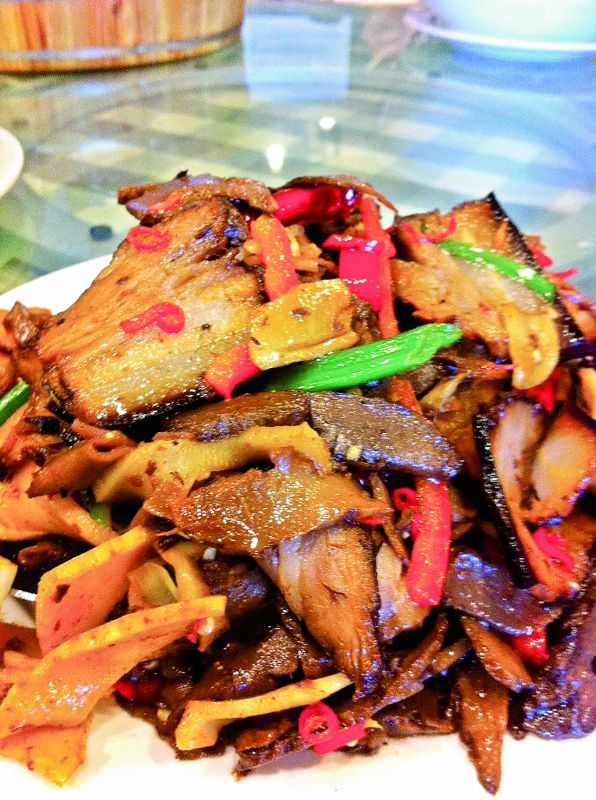 Method
Boil 750 ml of water in a pan on high heat. Put the pork pieces in the boiling water.
Add green chillies. Cover the pan and boil for 20 minutes on high heat.
Add bamboo shoot and salt. Stir all the ingredients and cover pan.
Simmer on low heat till the bamboo shoot blends completely with the pork.
Serve hot with steamed rice.