Pineapples are the only known carriers of bromelain, an enzyme that breaks down proteins. 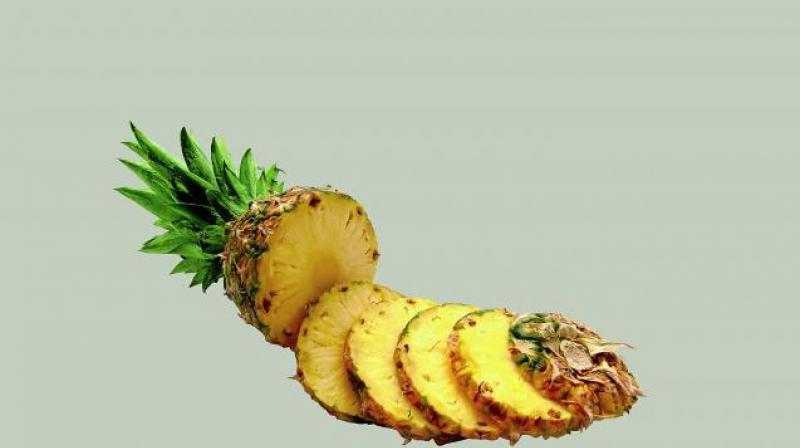 The pineapple made its way to England in the 17th Century and by the 18th century, being seen with one was quite a status symbol.

There’s an elegant sweetness and a piquant tanginess to the pineapple, making it the perfect team player in a whole range of dishes — from lush desserts to robust grills, fresh relishes to creamy smoothies. It’s juicy, golden, tropical. It’s the lovely, happy taste of summer.     Originally from South America, pineapples were discovered by Christopher Columbus on one of his voyages to the New World. When he brought them back to Spain, many Europeans, royalty in particular, were completely bowled over by the delicacy. They loved the sweet, tangy taste of this new, exotic fruit. They tried to grow them, but because pineapples need a tropical climate to flourish, they didn’t get very far.

The pineapple made its way to England in the 17th Century and by the 18th century, being seen with one was quite a status symbol. A single pineapple cost the equivalent of $8,000 today. In fact, the fruit was so desirable and rare that consumers often rented a pineapple for the night to show off to fellow party-goers. In the 1700s the fruit’s crown-like top and gem-like texture also started inspiring artists who began incorporating it in their work, depicting it in paintings and wooden furniture carvings. Napkins, tablecloths, wallpaper and bedposts were decorated with drawings and carvings of pineapples. Those who couldn’t afford to buy the fruit, bought porcelain dishes and teapots in the shape of a pineapple, which became hugely popular in the 1760s.

The versatility of pineapple is the primary reason for its huge popularity across all culinary cultures. It blends well with a variety of food and spices, be it tacos, stir-fry, barbecue, dessert or a drink, and adds a special zing to any meal.  The fruit has also gained recognition as a super fruit.  It boosts 130 per cent of your daily intake of Vitamin C, a daily dose of pineapple can really boost your immune system. Not only is it full of fibre and antioxidants, which help aid digestion and improve gut and oral health, it also contains bromelain, an enzyme with anti-inflammatory properties proven to help people suffering from arthritis. Pineapple is also rich in Vitamin A, beta carotene and manganese, which have been shown to help prevention of cancers of the mouth.

Pineapple cores are much tougher and a lot less sweeter than the main part that is eaten, but it is a great way to get extra fiber into your diet and it contains high concentrations of bromelain. When you eat a pineapple, it eats you back. Pineapples are the only known carriers of bromelain, an enzyme that breaks down proteins. Since your body is made of proteins, the pineapples you eat are also trying to digest you. But don’t worry, once you swallow the pineapple, the acids in your stomach destroy the enzymes. It is used as a meat tenderiser, and if you leave it on the meat too long it will just turn to mush. It has an acid content in its juice which can tender or cook the meat by dehydrating it easily. Because of its acidic juice, which helps to remove tar from the lungs of smokers, it is called smoker’s juice.

Storage:
At room temperature, a ripe one will keep for around three days. Whole pineapples shouldn’t be stored in the fridge, but once the flesh has been peeled and chopped, it’s fine to chill and store it in an airtight container.

Fun fact
The word “pineapple”, derived from the Spanish word piña, was first used in 1398 to refer to a pinecone. This changed about 300 years later, with the word pinecone being introduced, so pineapple could be used exclusively for the fruit. 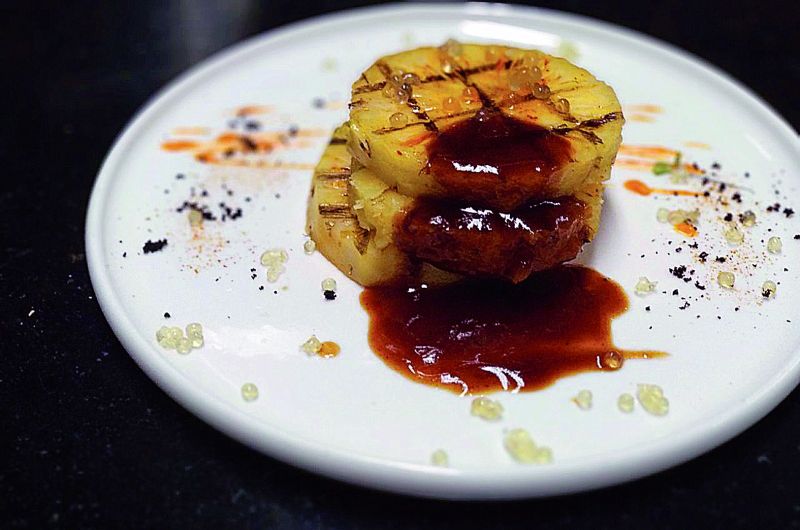 Method:
In a large bowl, mix cream cheese and sugar together. Add a can of pineapple and whipped topping to the cream cheese mixture. Mix well until smooth.
Pour mixture over crust and top with a layer of canned pineapple. Cover and chill for two hours. 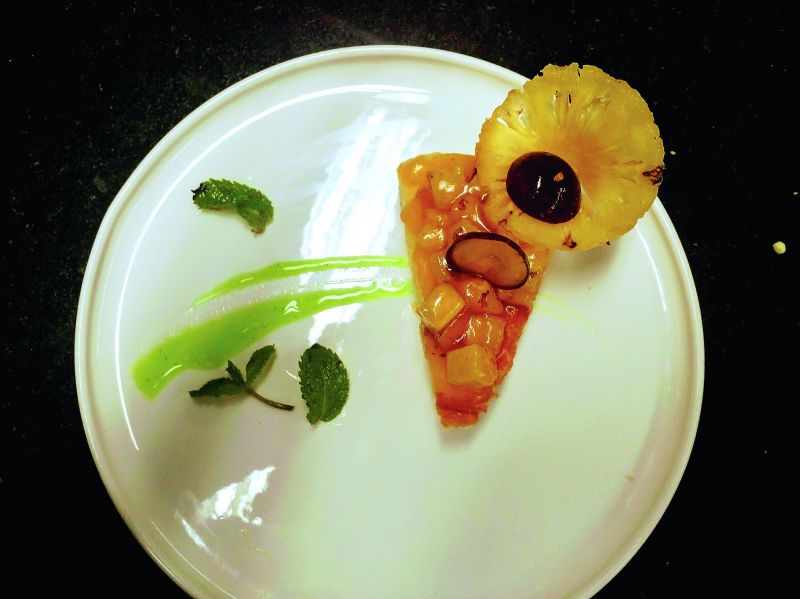 Method:
Slice the pineapple into medium-sized pieces.
Take a bowl, add hung card, lemon juice, chaat masala, red chilli powder and mix well.
Marinate the pineapple with the ingredients in the bowl and refrigerate for six hours.
Arrange them in skewers and grill in hot tandoor till it turns golden in colour. 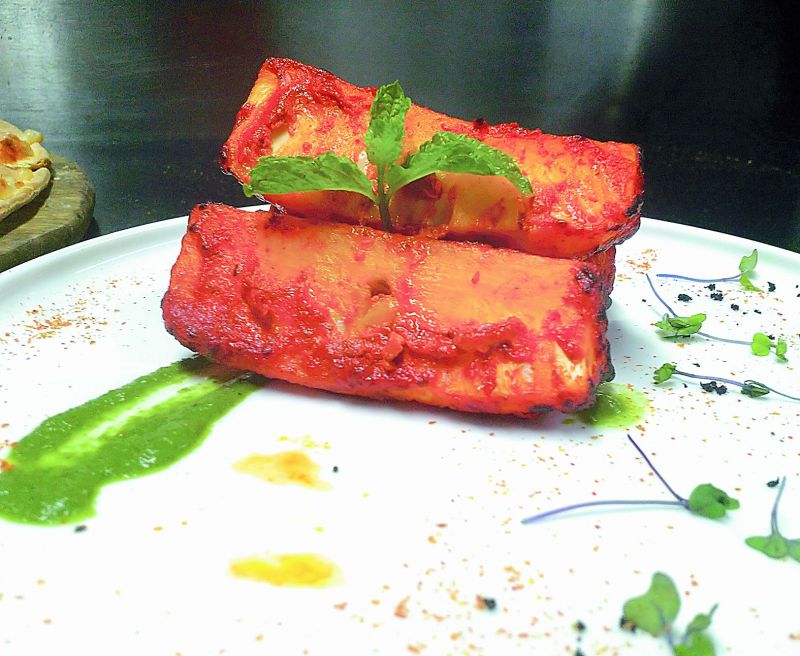 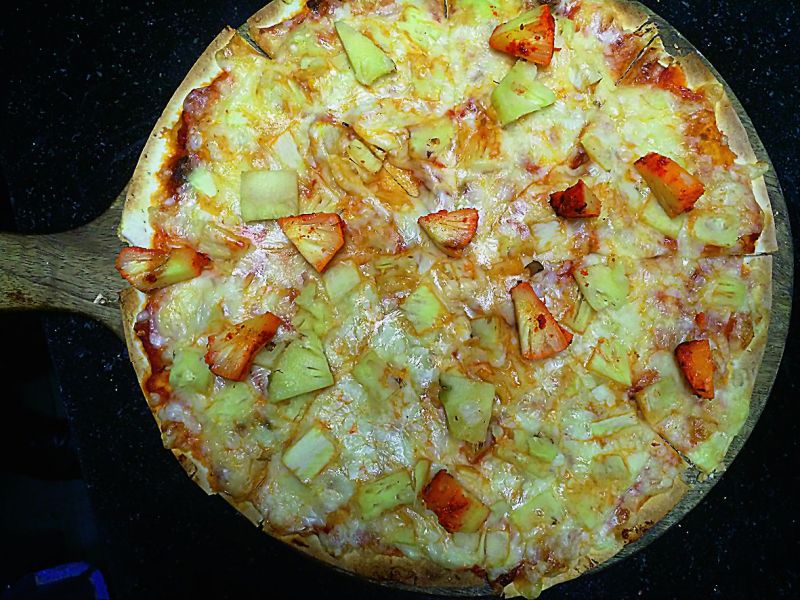 Method:
Cut pineapple into small chunks.
Put tomato sauce over the pizza base, top it with pineapple chinks and sprinkle cheese over it.
Bake pizza for 8 minutes in a pre-heated oven at 1900 C.

(The writer is the executive chef at Brew Buddy)