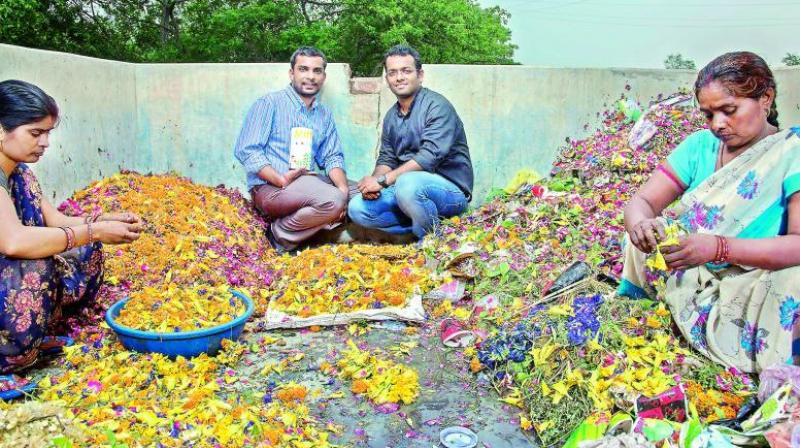 Ankit and Karan pose amidst flowers collected from temples.

Conversations can bring about change and Ankit Agrawal, the founder of Help Us Green, can surely vouch for this axiom. A social enterprise working towards minimising waste discarded in the Ganga, his foundation achieves its objective by recycling flowers used in temples into useful products such as incense sticks, cones and vermicompost.   Ankit’s journey began the day when the Kanpur resident and a friend were sitting on the banks of the Ganges. “It was Makar Sankranti and bathing in the Ganga on this day is considered as auspicious. In the hour we sat there, we saw over 150 people bathe in the river, while many drank the water or collected it in canisters. Plus, a truck carrying 1.5 to 2 tonnes of flowers dumped its contents into the river. The water was filthy and I told my friend, that it was the government’s fault that nothing was being done,” remembers Ankit.

However, it’s the sight of flowers being dumped into the river that set him thinking. “When we think of waste entering the Ganga, we think of industrial effluents. However, tonnes of flowers, which are often coated with chemicals and pesticides, are dumped too,” points out Ankit. That’s when this automation scientist reached out to his childhood friend and current Operations Manager of Help Us Green, Karan Rastogi. “Karan used to visit temples in Kanpur regularly. So I called him up to find out why so many flowers end up in the Ganga,” says the entrepreneur.

Their research revealed that every day, about 4.5 to 6 tonnes of flowers are thrown into the river and the number increases to around 9 tonnes on festive days. “We also found out that there were no government policies or measures in place to restrict, minimise or treat the discarded floral waste,” rues Amit. And so, bent on preserving one of the holiest rivers in the county, Amit and Karan set up Help Us Green in 2015 with limited funds and manpower.

“We started off with just `72,000 and two or three female workers. We didn’t even have a facility and used to work in a small space on the outskirts of Kanpur city in exchange for the vermicompost we made,” says Amit. The initial days were full of struggle. Amit reveals, “We knew that if we wanted to sustain the organisation, we had to make it profitable. But, flowers used in temples are considered sacred and so, the biggest hurdle was to convince people to part with the flowers. Some doubted our drive as they thought it would peter out after a while.”

The duo pulled off the seemingly impossible by giving their products trendy packaging and making good use of their convincing powers. The breakthrough, however, came about when they created ‘Yagya’ a branch of products whose packaging was made of seed paper and boasted the image of a deity. “The novel concept prevented people from discarding the packages thoughtlessly and also made them feel like they were doing something beneficial to the environment. Eventually, more and more temple authorities were willing to come on board,” shares Amit.

Help Us Green started with recycling 18 kilograms of flowers per day and now ‘flowercycles’ over 38 tonnes of temple flowers a day. They have successfully raised over a million dollars; have a 21,000 sq. ft. facility with a 15-member team and also employ 73 women full time. They have launched two additional plants in Varanasi and Mathura and are now investing heavily in research and development. The duo is eager to use flower waste to create a sustainable alternative to thermocol. “Florafoam will be a kind of biodegradable Styrofoam  which can replace, non-recyclable, non-biodegradable, single-use thermocol. We also want to use the waste to make stationery and other products,” says Amit. When asked what lies ahead for the organisation, Amit says, “Our goal is to stop temple waste from being thrown into rivers. But our short-term goal is to employ at least 5000 women.”