Even after retirement he will continue to play an active role in social causes that are close to his heart. 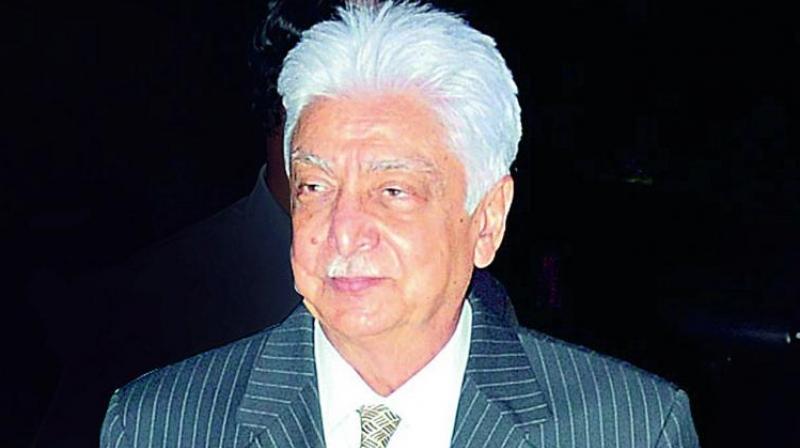 We live in a country where the uber rich stay in luxurious skyscrapers in cities and live flamboyant lives. Today, when the richest one per cent owns 73 per cent of the wealth, leaving not even 5 per cent of it for the poorest 60 per cent, India needs more Azim Premjis who think “they are only trustees of wealth and not owners”. Last week, the “frugal and generous billionaire” announced his retirement from being the executive chairman of Wipro Ltd, which he had painstakingly built over the past 53 years.

At the age of 21, Premji stepped into the shoes of his father Hassam Premji, and soon demonstrated that he had inherited the business acumen of his father by creating wealth and providing jobs. He successfully diversified the vegetable oil business of his father into FMCG, construction equipment and medical devices; spotted opportunities in the technology space much ahead of the times and grew the company into a $11 billion business group, while keeping the value systems well in place. Between 1997 and 2002, Wipro’s BPO business was the fastest wealth creator. He was also one among the few key business leaders who put India on the global IT map.

“Not many companies have been able to fascinatingly diversify business from something like edible oil to technology. Wipro’s FMCG business is also equally successful. While growing the company, Premji never compromised on good governance. In fact, Wipro has never been accused of governance issues,” says Arvind Singhal, Chairman and MD of Technopak Advisors.

At the age of 54, Premji scaled further heights by following the footsteps of his mother, Gulbanoo Premji. He entered the league of Bill Gates, George Soros and Warren Buffet, not for the wealth he had created, but for the wealth he gave away. In 2000, he decided to work for the betterment of society and started allocating funds for social causes. In March this year, he earmarked 34 per cent of the shares in Wipro with a market value of `52,750 crore or $7.5 billion, held by certain entities controlled by him for activities of his charity foundation. This raised his total commitment to `1.45 lakh crore or $21 billion. Earnings from 67 per cent of Wipro’s shares have now gone towards his charity foundation. Meanwhile, the Premji family and entities controlled by them hold a 74.30 per cent stake in Wipro, making them one of the five largest private endowments in the world and the biggest in Asia.

The $ 51.6 billion committed by the Bill and Melinda Gates Foundation and $ 36 billion by Stichting INGKA Foundation are some of the other large philanthropic endowments globally. The largest commitment made in the history of free India has also put Premji in the league of Jamsetji Tata and Dorabji Tata, who worked towards nation-building.

In 2013, Premji became the first Indian to take The Giving Pledge, a global campaign by Bill Gates and Warren Buffet to encourage rich people to come forward and commit a part of their wealth to philanthropic activities. “I was 21 and over the next 30-odd years, I focused on building Wipro into a successful and professionally run organisation. As Wipro became a globally successful IT services firm, I began to seriously consider what I should do with my wealth, which had accrued from the success and market capitalisation of the company,” Premji said in a letter for the first international Giving Pledge group.

Premji also inspired several others to take the Giving Pledge. Rohini and Nandan Nilekani have pledged 50 per cent of their wealth, PNC Menon of Shobha Builders half of his wealth and Kiran Mazumdar-Shaw of Biocon, 75 per cent of her wealth.

“Azim Premji will go down in the annals of history as one of the iconic pioneers of India’s IT sector. He has been a visionary entrepreneur who has pursued his business with the highest values of good governance. His value system is reflected in his philanthropy,” says Kiran Mazumdar-Shaw, who has long years of association with Premji.

Significantly, in the letter to the Giving Pledge group, Premji acknowledged that his mother Gulbanoo was the most significant influence in his life during the growing-up years. She dedicated a large part of her life — close to 50 years —
helping build and run a charitable orthopedic hospital for children in Mumbai. To this day, Premji appreciates her commitment in facing the challenge of getting funds and organising everything to run the hospital.

“He is also inspired by Mahatma Gandhi’s idea of ‘trusteeship of wealth’ — the principle that the wealthy must act as trustees of their wealth and not as its owners, thus using the wealth for social good,” observes Anurag Behar, CEO, Azim Premji Foundation and Vice Chancellor, Azim Premji University.

Azim Premji follows a simple, frugal lifestyle for a billionaire. Arvind Singhal finds Premji to be a multi-faceted person. “Looking at the unique person he is, Premji never flaunted his wealth despite being wealthy throughout his life. He never went after power and position. He never lobbied for positions in industry and business chambers, political offices or in ministerial councils. He always came across as a confident man and never believed in running after those in power for gains,” he says. Even so, recognitions kept coming his way. He was twice listed among the 100 most influential people by TIME Magazine and was conferred both the Padma Bhushan and Padma Vibhushan.

Despite all the recognitions however, he has carried his middle class values throughout his life and been able to pass on his principles to his family members as well. He believes that the success of such initiatives will be complete if the family is able to resonate with his ideas, spirit and philosophy. No wonder then that his family is as much part of the activities of the Azim Premji Foundation as he is.

“His son Rishad, who is a very worthy successor, has been nurtured with the same set of values and principles and will do Wipro proud in the years ahead. Azim Premji is an inspiring role model for every entrepreneur and India’s youth to aspire for prosperity through purpose and principles,” states Shaw.

As Chief Strategy Officer, 42-year-old Rishad Premji is expected to drive the company to new heights. Now, it is his turn to prove his acumen in creating value for the enterprise and wealth for himself as the senior Premji has not left huge personal wealth for the sons — Rishad and Tariq. A cultural shift is unlikely under Rishad as he has been with the company since 2007, after previously working with Bain and Company and GE Capital. He is also a graduate in economics from Wesleyan University and did an MBA from Harvard University.

“Rishad is an able successor — very thoughtful, smart, amiable and experienced. Azim Premji leaves behind in Wipro a rich legacy of a great culture, gold standard governance practices and a driven organisation. His new move will give him time to pursue his passion for philanthropy,” tweets Harsh Goenka, Chairman, RPG Enterprises, adding, “The more you get, the more you get to give — that’s been the motto of the most generous and humble man I know.”

The Foundation and its causes

Azim Premji’s philanthropy is not about signing off cheques or leveraging corporate social responsibility activities for the company’s branding. He has chosen to address one of the basic necessities of society and wants to focus on one area rather than doing many things simultaneously. He firmly believes that a strong educational system is essential to sustain the economic growth of the country and to pull millions of Indian citizens out of poverty. Education has not been just a random choice; Wipro invests on continuous training of the staff and has built a good internal training team.

“My experience in India has taught me that establishing effective operational and execution structures is much harder than committing or collecting money. That is why I decided to set up an operating organisation, the Azim Premji Foundation in 2001, with the aim of working in collaboration with the government to improve the public schooling system,” said Premji, adding, “By committing money to a cause, change won’t happen. Getting good people is important.”

Behar says that Premji is very much involved with the work of the Foundation as its Chairperson — and he plays that role with full involvement and rigor. “Like the other organisations that he has built, the Foundation has also been built as a professionally managed organisation — led by people who have relevant expertise,” he says. In 2009, the Foundation decided to deepen the support to the public schooling system by creating institutions at the district and state level to work on capacity development of teachers and other people in the public education system. The institutions also include a University focused on education and related human development domains.

To enable this strategy, Premji donated about 8.7 per cent (then valued at approximately $ 2 billion) of the total stock of Wipro out of his personal holdings to create an endowment of the Foundation in December 2010. He also added an irrevocable clause so that the money would be used only to fund the Foundation’s work. The annual requirements of the Azim Premji Foundation are met through dividends earned on these shares. The Foundation also supports other not-for-profit organisations which work in certain specific chosen areas through multi-year financial grants.

One of the major initiatives of the Foundation is to improve the government schooling system across 40 districts in seven states — Karnataka, Rajasthan, Uttarakhand, Chhattisgarh, Madhya Pradesh, Telangana and Puducherry. Thanks to this initiative, the Foundation reaches out to more than 3,50,000 schools. The Foundation also works with property developers to run schools in construction sites for children of migrant workers. It has also set up demonstration schools in Yadgir, Sirohi, Tonk, Dhamtari, Uttarkashi and Udham Singh Nagar to provide free education for the local community. “Over the next few years this work will grow by two to three times. The Azim Premji University in Bangalore will expand from the current 1,000 students to 5,000 students in the same period. And we will set up a second university, in all likelihood in Bhopal,” states Behar.

Premji does not want the money spent on social causes to be referred to as ‘investment’ as he does not expect a return from it. “The continued focus and support he has been providing for philanthropic activities makes him unique. In the 60s and 70s, some of the business houses had set up schools, hospitals and universities,” says Singhal.