A ‘foot’ in the right direction

India’s first female football coach has worked as a domestic help and at a petrol bunk! 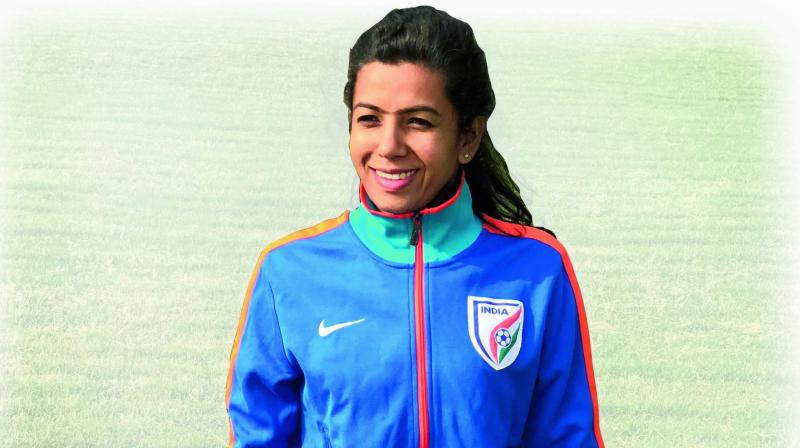 She is not yet 30. But that has not stopped her from becoming the first  female AFC A license coach in India. Anju Turambekar’s saga reflects the blood, sweat and toil invested over the years to get to her goal post. “In the highly competitive world of football, one needs to constantly push the boundaries of performance in an effort to stay on top. It took years of preparation, dedication, hard work and commitment to achieve the A-License degree. I am humbled to become the youngest women ‘A’ License coach in India. I feel it’s a huge responsibility and motivates me to take up new challenges,” says the lady with a gentle voice.

Her story is inspiring in many ways, and is also a practical lesson in always having a Plan B in life. “I developed my interest in the coaching field while I was nearing the end of my playing career,” admits the talented player who goes down memory lane, as she reconstructs her remarkable journey for us. “My first foreign trip to Netherlands in 2010 for the KNVB International Coaching course helped a lot to believe in myself. I had done my first ‘D’ license course in 2012 in Mumbai. After that I kept focusing on grasping and making myself better. After every course I realised that I am becoming more professional and knowledgeable,” she reveals.

All great success stories often have modest beginnings. Anju Turambekar is no exception. As clichéd as this may sound, she hails from a nondescript town Bekanal in Kolhapur. That is where her love affair with football began. “I have been always a curious child. I got into football only knowing there’s a game even a girl can play. Until I kicked the ball for the first time I didn’t even know how it’s played. I started playing with the boys in the nearby town by skipping school on an almost routine basis and was always the first one on the field. There were a lot of obstacles but I kept my focus on the game. Daily farm and house chores, tending to our herd of buffaloes while maintaining a balance between study and play was a big challenge,” narrates Anju.

Given these tough obstacles, most young girls would have probably surrendered to their circumstances. But Anju was clearly made of stronger metal. “I am an extremely optimistic person and I never give up on things. The kind of values I have learnt through my football journey, and from my early life while working in the farm have been crucial in moulding me into the person I am today. The connections I made between values and my daily life helped me to always push myself for better tomorrow. I was introduced to the farm even before I was enrolled in the school. Since a kid I have experienced first-hand hard work that a farmer has to put in. It’s a massive task, and it takes the entire year to yield any results. So despite the struggle, there was an education for me in that,” she adds.

And hardwork, like the climax of a happy Bollywood ending, always pays rich dividends. But before that, she had the onerous task of gaining acceptance from her family and friends who considered football as essentially a male game. “It was definitely the hot-button which eventually landed into the conversational circles of my family, village elders and school members. My mind was constantly racing and I had to constantly defend my actions to every other person. For girls to be wearing shorts, coming home at odd hours and playing sports which is generally accepted as a male behaviour is not something that people were able to readily accept. I found myself in tight situations on several occasions. It was unacceptable behaviour as far as my family was concerned. Some people from my village and nearby towns tried to influence my father. Apparently, they felt that he had to be more assertive and take control over my actions. I had also learnt to ride motorbikes which created all the more talking points since driving/riding vehicles were strictly meant for men. Eventually my father intervened and asked me to stop playing football and going to school and suggested that I rather get married after completing my 10th Standard exams,” says the feisty lady who holds a bachelor’s degree in physical education.

Ironically, her talent was finally recognised by her parents after Anju became the first girl from Kolhapur to lead the under 19 football team. “Within few months of my playing career, there was an opportunity to go for U-19 selection trials to Mumbai. My parents were unwilling but nevertheless I managed and eventually got selected to play for Maharashtra in U-19 nationals at Assam. The news made it to the sports pages of the local dailies in Kolhapur and got people talking. However, my parents were unconvinced about the prospect of football as a career option. Even after playing in several National Championships, and finally leading the Maharashtra team (became the first captain from Kolhapur), my parents asked me to stop playing football and join the police force. Finally, I ran away from home to pursue football as a career option. At first, it was difficult to digest but my parents were happy when I finished my studies and worked to support them. It took several years to win their faith and trust,” she confesses.

While it may seems like a  natural progression for Anju to have made that transition from playing football to coaching, there is a tale of heartache behind this decision too. “After leaving home I was studying (graduation) and playing in Pune. I got selected for the India camp twice but unfortunately those camps never took place. I started working in Pune just for my pocket money. If that was impulsive the new struggle was even more terrifying. I struggled for the basic necessities of life — food, cloth, shelter. There were two options — either to go back and leave football, or discover a new path. I chose the latter and started working as a domestic helper and washing utensils. Life was tough but I was at least able to fund my education, food, clothing and shelter. To earn a bit more, I also started working in a nearby petrol pump. Later I went for senior national trials in Mumbai and the coach of Maharashtra team offered me a job of coaching in NGO (Magic Bus). I was very happy and after coming from nationals and immediately joined Magic Bus. Work was priority and was growing day by day. I wanted to earn money for my livelihood and slowly I stopped playing nationals but whenever possible continued to play for local level tournaments,” she confesses. In this post modern world, where shattering the glass ceiling is not as easy it appears,  how difficult is it to coach the men’s team in comparison to the women’s team? “I have never looked at men/women’s football differently when it comes to my work. I have been doing a lot of coach/instructor education for Grassroots development and most of the time I train men coaches. I have also worked with the boys team in Mumbai previously.  My priority is to deliver quality and be a better professional,” says the confident coach who  believes in giving her 100 per cent, “in whatever I do and learn every day to make myself better. I want to take up higher challenges that not will only help me to grow but also help inspire others,” she adds.

She makes us so proud, this girl called Anju!