The actress chats about her work, money and not fitting a mould. 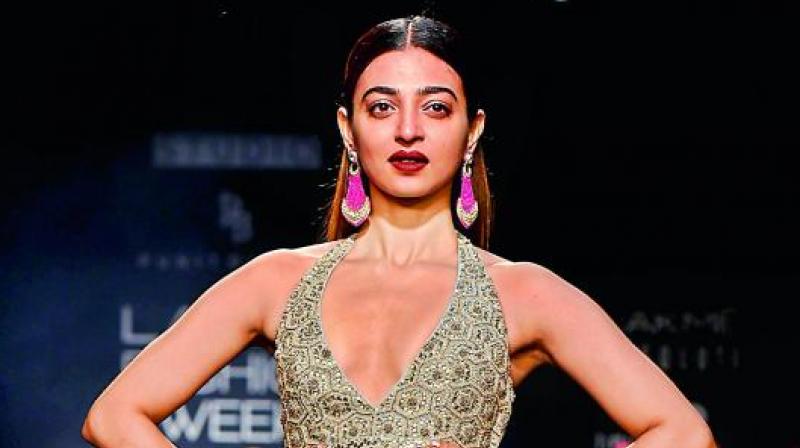 Radhika Apte has had the career of dreams — successfully balancing parallel cinema, regional cinema, mainstream cinema and even Hollywood films. And she has made it here through sheer grit and hard work. The actress known for her unconventional choices that recently made meme-material after delivering three consecutive Netflix hits, had another exciting release last week — Sriram Raghavan’s Andhadhun.

The actress chats to us about her films and the inner workings of showbiz.

You are being hailed as a queen, especially as far as digital platforms are concerned.
Please don’t say that! A lot of my work on digital media did come out back-to-back, but it was a coincidence. I only had small parts in Lust Stories and Sacred Games. Ghoul was the only one where it was all me. If people were right in saying that I was actually running three shows, I would have taken pride in that. But it’s not true — it has been made into a bigger deal than it actually is. And you can’t take pride in something that’s not actually happening.

Your repertoire of work is quite amazing. As an outsider, is it difficult to turn down offers?
I have always turned down offers. I personally feel that saying “no” is very important; you can’t say “yes” to everything. You need to know what you can do. Don’t say “yes” to work out of desperation —that’s what lots of people have told me.

How important is money?
It’s very important, of course. My survival depends on it. I live an expensive lifestyle across two countries, so I have to work my ass off to pay for my flight tickets. My husband asks me why I fly economy. Of course, I fly economy, who will pay Rs 5 lakh on a stupid business-class ticket? Money is important for me to maintain the lifestyle I want.

Fortunately, that hasn’t made you succumb to the industry’s norms.
In fact, I have. You have to bow down sometimes and do certain things, attend events, just because... Trust me, I don’t like doing those things, but I still do them.

It seems your emotions are written on your face.
I know, I find it really hard to hide my mood, and that’s not a good thing. I don’t know how to pretend to be happy when I am hating things. But sometimes, I feel its fine to be you. How much will you pretend? Be yourself as long as you are not being disrespectful or ungrateful.

Do luck, talent, and a robust PR machinery go hand in hand these days?
You need to work on your talent, but luck is very important. This is a business in which your look is the first thing that’s taken into consideration. Earlier, the industry only accepted good-looking people, but things have changed now. Yet, if you’re good-looking, you have things easier. And that’s not true just for actors. Even if you’re a good-looking DOP or editor, you will get more work in the beginning. But eventually, it’s your talent that speaks for you. Luck is about being in the right place at the right time.
And when it comes to PR — I was initially against it because of a bad experience. But now, I am happy with my PR team, which comes as a surprise to me. We really get along well.

In this fairness-obsessed industry, have you lost out on opportunities because of not fitting a mould?
I have been turned down because I’m dusky. I remember one instance very clearly.
These days, there are a lot more dusky actresses in the industry than there were before. But a typical, pretty-looking fair girl has a higher chance of being selected than a dark-skinned, unconventional looking girl. Things are changing, but if you are still promoting fairness creams, then the bias definitely exists.

After being a part of so many popular shows and movies, do people now know who you are?
I don’t think so. People still don’t know me. Some say that I can’t walk on the streets anymore. What rubbish, of course I can. If you don’t wear tonnes of makeup and dress like a star, nobody notices you. People don’t have the time, everyone’s busy. I know that stars do get mobbed, but that doesn’t happen to me. I still get my privacy even in public places.