A well aimed shot in the ‘air’

This 23-year-old has been ranked as world number 1 in the air pistol category. He talks about his success. 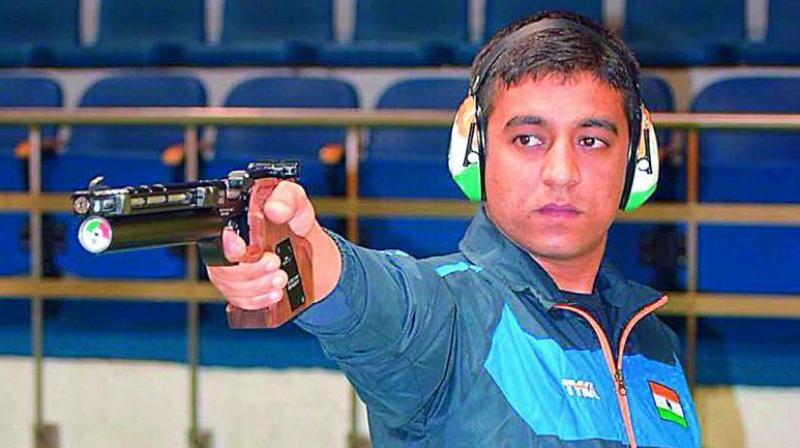 Shahzar Rizvi was speaking from Delhi; and the next day, he was off to Munich. Hardly a fortnight is left for the International Shooting Sport Federation (ISSF) World Cup Rifle/Pistol, where he will take part in the 10-metre air pistol. But there’s no stress in his voice. “I am not tense, because I know it’s my gold,” he says. Overconfident, he might sound, but for a small town boy from Mawana Khurd in Meerut who reached the World No 1 ranking as a 23-year-old, his words brims with grace. “As a child, I used to carry around a slingshot and there wasn’t a day my parents didn’t get complaints from neighbours for breaking their windows and bulbs. From bottles to birds, I aimed at everything I set my eyes on,” he laughs. As he grew up, toy guns and catapults got replaced with air guns.

With the influence of his double trap shooter cousins Rayyan and Shahal, Rizvi aimed at the bull’s eye. But his parents — Shamshaad Ahmed, a freight contractor at a private firm, and Shahjahan Rizvi, a homemaker, were dead against it. “They wanted me to focus on studies instead of pursuing an elite sport. But I was adamant and finally, my papa agreed, on the condition that I chose a lesser expensive sport,” recalls Rizvi, explaining how he chose air pistol. Soon, he found his coach in Amol Pratap Singh of Sports Authority of India who groomed the prodigy and helped him focus on his strength. The winning streak began at the 2014 when Rizvi won silver in the 58th National Shooting Championship Competition in Pune and the next year, a gold medal, edging out Olympian Vijay Kumar. The victory gained the 19-year-old entry to the Indian Air Force (IAF), where he had all facilities to hone his skills.

“As a sergeant in IAF, I got everything I required — mental training, physio training, excellent coaching,” says Rizvi, who went on to strike gold in the Asian Airgun Champion-ship in Tehran in 2016 and then, another gold at the Commonwealth Shooting Championship held in Brisbane last year, a gold at the ISSF World Cup Mexico, held in March 2018, with a world record score of 242.3, beating the likes of Jitu Rai in 10-metre air pistol, followed by a silver win in Korea.

Surprisingly composed, Rizvi doesn’t sound ecstatic about the win. What worries him is that he lost gold by a 0.2 point margin. “I had practised very hard and could perform well in Mexico. But the homework wasn’t good for Korea and I couldn’t do it up to the mark. I will make up for it in Germany,” he says. Banking on the instructions of his coach Ronak Pandit and tips from India’s national pistol coach Pavel Smirnov, Rizvi is determined to bring out his best. “Earlier, I used to practice throughout the day, but Ronak sir said too much practice would affect my strength and now, I train for two to two and a half hours a day. Following the exercise suggested by Smirnov, I visualise the shooting range and shoots 200-300 pellets every day.” 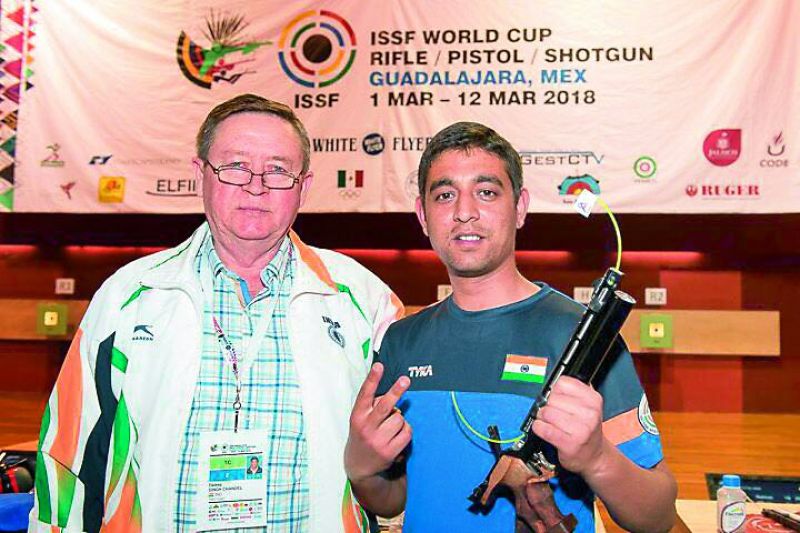 The coach knows what Rizvi wants. “I am working on breath control, heart beat control and timing because shooting is a mental sport,” he says. For that, he has a few other techniques as well. Rizvi says, “I maintain a diary and note down each and every point I need to focus on, how he performed — in competitions and during practice.” And then there’s self-talk. “Self talk is a great technique for mental peace. I do it always,” he adds. Other than techniques, Ronak focuses on practice time too, which is why they decided to miss the World Cup championship in the US. “During practice, I score anywhere between 584 to 588, but for tournaments I need to work hard to score better,” he says, with not an iota of stress or panic.

That’s because his idol is Sachin Tendulkar. “He converts his aggression into the game and responds with his bat. I too do that. All my anger, aggression and frustrations are vented out on the shooting ground,” he says. That must be why Rizvi responded with gold and a top class scoring when he was pushed out of the squad at the Commonwealth Games when the Indian Shooting Federation reduced the number of slots and chose shooters who competed in both 10m air pistol and 50 m pistol events. “Back then, it hurt. Had I been chosen, I would have brought home a gold medal. But in a way, it turned out to be a blessing in disguise. Because the silver medal in Korea and the World no.1 spot came after that,” says Rizvi, who inspires many, including his little brother Ahamar, who currently trains for the nationals. Rizvi, however, chooses to downplay his latest status, “A World No 1 is not a great achievement; rankings keep on changing. My aim is the 2020 Olympic gold. And I am sure, it is mine!”