Innovation in their veins

Two teenage brothers, who run their own company, have not just developed 12 apps, but also the world’s thinnest and lightest tablet. 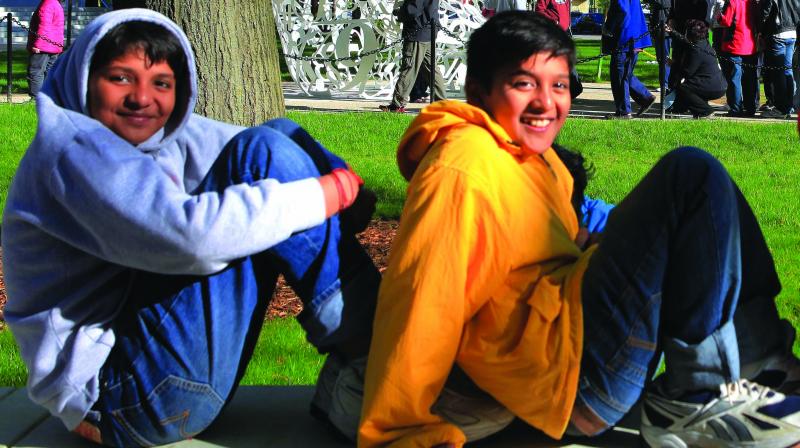 Shravan and Sanjay bought a lot of books and studied together.

For teenage brothers, Shravan and Sanjay Kumaran, app developers and founders of GoDimensions App Development Company, innovation means everything. The boys have developed numerous apps and devices to solve problems of those around them. They have also created GoSheet, the world’s thinnest and lightest tablet. They have also been featured in 30 under 30 Forbes list. And the young entrepreneurs are just warming up, and excited about making many more dreams come true.

Talking about their journey, challenges and future plans, Shravan says, “We were very interested in knowing how a computer works. We would play with our father’s laptop. It was then that he suggested that we try learning some programming. He taught us a basic language and we picked it up really fast. Our logic was very good and our dad was very impressed. He kept teaching us. Then we started learning Java and C++.”

But it was a time when cellphones were just beginning to gain popularity and the duo was unsure if they should start developing apps compatible with cellphones or computers. “We decided to go ahead with apps for mobile phones as we thought it had more potential. It is something one carries everywhere. However, the internet usage in 2011 was not as it is today. We learnt everything through books. Dad too didn’t know much about the mobile phone apps,” he recalls.

Shravan and Sanjay bought a lot of books and studied together. “We understood the concept of programming. That is how our journey started. Now we teach our dad at times,” he chuckles.

The brothers are releasing an app named GoDonate soon. “It will be released in a few weeks. We were at a wedding recently where we saw a lot of food being wasted. This is a huge problem. We thought of developing a platform where people can share their resources,” he says. The app will be available to android users, initially.

The duo has developed around 12 apps till now. “We get a lot of requests from people and different companies who want to develop an app. However, we think developing our own ideas has much more value than developing someone else’s.”

Inspiration for their app ideas comes from the problems they face in life. “For example, we saw that our mother was unable to leave the house around the time we would come back home. She had to be there to open the door. So we developed a home-automation device. Through this app, whenever one rings the doorbell, you get a notification on your phone, you can see who is at the door and you can decide if you want to open the door or not. You can also communicate with the person at the door. It works with a camera and a micro-controller,” says Shravan. It is not just the features of this device that are attractive, the price is a draw too — less than $100.

While it was their father who sponsored them initially, they are no longer dependent on him. “We were initially a dad-funded company and would pitch our ideas to him,” he says. This helped them develop a business sense.

Apart from apps, the brothers also develop hardware. “We worked on a virtual reality device. It was a new technology when we started working on it. Basically, we wanted to experience virtual reality for ourselves but it was very expensive. My brother and I decided that rather than developing it, we will work on making a device. We created this device that used mobile phone screen as a display. This was almost four years back and it was wireless. The device was only for $10.”

However there is a huge difference between developing hardware and software. “I can just develop the software and put it up on the app store. However, with hardware we need distribution channels and we need to manage all that,” Shravan explains.

It is this hurdle that has stopped them from focusing on developing hardware as of now but the duo plan to take this forward once they have completed their education.

While Shravan is now in his first year of college, Sanjay is in his last year at school. The brothers juggle the roles of a student and innovator and attribute it all to “smart time-management”.

About their inspiration, they share, “We see stories of people like Steve Jobs and Bill Gates. Steve Jobs — for the way he looked at UI/UX, and Bill Gates — for the way he developed his marketing strategies. It is so inspiring. We also look up to the Wright brothers and how they coordinated with each other and worked together to create a plane.” The duo wishes to expand their skills and take their innovations across the globe in the coming years.