No 100th film pressure for Ajay

Looking back at his career, the Tanhaji actor talks about being a Jack of all filmy trades. 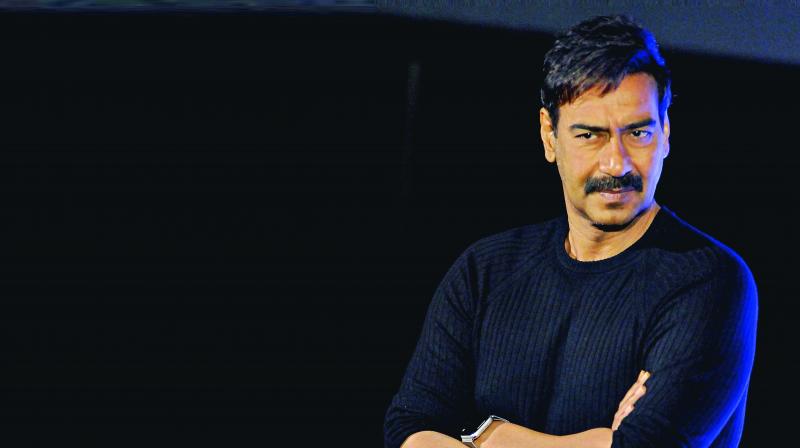 In a career spanning over nearly three decades, Ajay Devgn (50) has done every genre of movie in Bollywood. The tall dark and handsome hero has done action, thrillers, comedy, romantic, drama and offbeat films. Looking back at his career, Ajay talks about being a Jack of all filmy trades. The two time National award winner (Zakham and The Legend Of Bhagat Singh) is putting every ounce of his energy into the upcoming Tanhaji: The Unsung Warrior. Be it acting, production or his decision to make the movie in 3D, Ajay is truly the unsung hero. He has cast his wife Kajol and Saif Ali Khan in the movie. He has also made sure the film is devoid of controversy. Read on to get a glimpse into the Gangaajal actor’s mind.

Why did you choose to make the film in 3D?
It was essential to make this movie in 3D. It’s one-of-its-kind. You may have not seen this kind of a 3D film elsewhere. The technology that we have used is different. I had formed my own company a long time ago. I have been introducing heli-cameras and other technology from the beginning. Nobody will say films like this are only made in Hollywood.

What were the challenges you faced while researching for the film?
We researched for four years and worked on the technology for about two and a half years. Whatever happened during the mid-16th century there is a very thin line, and we had to think it over and then go ahead with the story. We needed to make it more factual and added entertainment value and drama to make it more interesting for the audience. Our writer met many historians. Waise bhi hamare desh mein logon ko kuch na kuch controversies karne ki aadat si ho gayi hai (Anyway, people in our country have a habit of creating some controversy or the other). We hope there is no such stuff with us though.

Are you feeling the pressure that Tanhaji is your 100th film, and 2020 your 29th year in the industry?
We all realised this during the shoot of the film. I have no pressures of this film being my 100th film, but yes, basically it’s all about teamwork, and we have all worked very hard. We just wish the audiences like the film. My filmy journey for these 29 years has been extremely satisfying. I have always worked on my terms and conditions. Sometimes people advised me to make fast money by dancing at weddings, but I have not done all that. I have also learned to say ‘No’ to working on a friendly basis because then those films may not do well.

What was your thought process behind casting Saif Ali Khan as the antagonist Udaybhan Rathod?
I felt nobody can be better than Saif. It’s an edgy and madness-personified character. His personality suits that. I was confident that Saif will perform to the best of his abilities, and he has done just that.

You have also cast your wife Kajol as your character’s wife Savitribai Malusare. Was she on board from the start?
I thought none other than Kajol could do justice to this character; I wanted her to do this character. Savitri Malusare’s character sacrifices a lot, and I knew Kajol would express her emotions to the fullest. She agreed instantly, despite us telling her that it is not a big part.

Did you always have an inclination for filmmaking?
I have learned most things related to filmmaking with my dad. I remember him shooting for prolonged hours. We would stand on our feet for hours and do the  editing. But now, I have a very good editor.

What are the challenges being an actor, director and a producer?
Being in the profession, you learn the nuances. But when you are acting, you feel that it’s challenging and difficult. While producing, you literally get into so many uncalled tensions — pressure of completing the film, keeping away from controversies, and still managing the shoot and other things.

At what point do you realise a film is not working?
We work to our heart’s content. I am happy to do films that I like, but at times we do go wrong. We usually understand it only after the film is half done, but then we cannot do anything. The film must be completed. We can make out when the film is not taking the needed shape on celluloid, so we have flop films too.

On a more personal note, what is your and Kajol’s secret to balancing work and your marriage?
We are like-minded but we give space to each other. An individual has his life as well a life for his family. So both of us are of the opinion that we need to give space to each other, and so we have carried forward our relationship successfully. It has been almost 20 years now.

Where do you stand on women empowerment?
History proves that women would put a tilak on their husbands’ forehead before they went to war, knowing that they might not return. Every woman — be it a mother, sister, or a wife — is the one who sacrifices everything for their family. They let go so many things to keep their family happy. Without the existence of a woman, no man can be brought on this mother earth.