In Pursuit of Happiness

There really could be no better Academy than Bhutan to have a presentation that brought to focus Khadi and its magical powers. 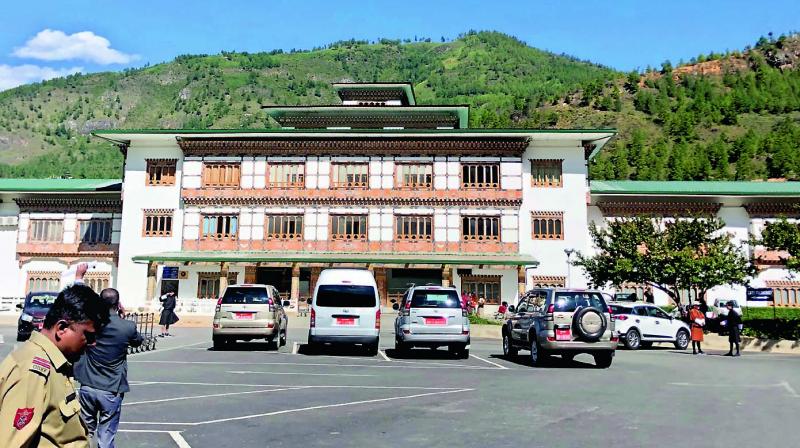 Bhutan has no traffic lights or uniforms to catch errant vehicles.

She wears a handwoven Kira complete with a gold dragon brooch; the national dress of Bhutan, but can speak chaste Hindi and will tell you she loves Bollywood’s gravity-defying dance moves, even when you are 30,000 feet above ground. Meet Pema Wangchuk, my earnest flight attendant on Druk Airlines, the official carrier of Bhutan. “I grew up on a diet of Bollywood, from SRK’s famous outstretched hands pose, to now Vicky Kaushal’s kickboxing in Uri,” she giggles as she hands me a piping hot cup of tea. As I watch the majestic Kanchenjunga pass by engulfed in clouds, the captain announces Mt. Everest is next and I gaze outside to marvel. It’s  swathed in white and its peaks hold so many secrets in its robustness, a million stories lie in its heart, of intrepid climbers hoping to reach the summit.

I land in Paro, where you can see the confluence of the Paro Chhu and the Wang Chhu rivers and I’m welcomed by a gust of fresh air which seems like just like a Diwali bonus when you come from the overcrowded, harsh city of Delhi, with its toxic air almost choking you.

And to my surprise, the airport is maybe as big as Connaught Place. But here is the catch, you need to be an expert pilot as it is situated in the steep mountains of the Himalayas and is one of the most dangerous in the world, 1.5 miles above sea level with peaks rising 18,000 feet. Add to this strong winds, and the greenest valley with houses strewn all over making landings and take offs daunting as well as treacherous.

The beauty of Bhutan isn’t as much in the surroundings as its people, who are not just humble and “happy” but emit an energy that makes you feel absolutely at ease within minutes. During the two-hour bus ride to the capital Thimphu, (we drove at 50 km an hour, nobody speeds here), I saw clean, blue rivers. It felt  as if they were following me through the nooks and crannies of the mountain drive lined with white prayer flags all across the horizon for peace. My driver came fully equipped with the latest songs of blockbusters and even mentioned a few TV soaps which I hadn’t heard of, such is the love for Bollywood stars and Indian nationals that he broke into a song mid-journey, “Tujhe dekha toh yeh jaana sanam” with of course a Bhutanese twang!

In a country which has no traffic lights or uniforms to catch errant vehicles, everyone follows the rules without it being reinforced, that’s why the Gross National Product (GNP) is less important than Gross National happiness, which reminds you of John Lennon’s song Imagine almost instantly, if everyone thought like these hilly people the world would really be a better place!

I was a guest of the Indian ambassador to Bhutan Ruchira Kamboj, an IAS topper, of the 1987 Civil Services and Foreign Service batch who reminds you of the elegant Maharani Gayatri Devi, with her doe eyes, dressed in pristine white, as she welcomes us to her dream home, complete with a nine hole golf course, overlooking the mountains, an idyllic setting even for a city lover like me. You are bound to fall in love with the place, and its simplicity. Can’t even think of the joy she must be experiencing with her bedroom windows opening to blue skies every morning with birds chirping, heralding a new day.

The Fashion Design Council’s ever energetic President Sunil Sethi, managed a coup of sorts by organising a fashion show, to pay homage to 150 years of Mahatma Gandhi.

There really could be no better Academy than Bhutan to have a presentation that brought to focus Khadi and its magical powers. Four Bhutanese designers (Chandrika Tamang, Kencho Wangmo, Tshering Choden and Sangay Choden) joined hands with three Indian style gurus (Rajesh Pratap Singh, Anamika Khanna and Samant Chauhan) to pay homage to the fabric of freedom. Under the stars, as the cold winds blew, making the temperature drop to 5 degrees, the warmth really came from the royal family of Bhutan, Queen mother Ashi Sangay Choden Wangchuck, Princess Euphelma Choden Wangchuck and Ashi Deki Yangzom Wangchuck, making an appearance and clapping on the Sufi kalaams of Rajasthani folk artiste Samandar Khan and the memorable Chaap tilak.. models walked down a runway made of jute.

Interestingly, 70 per cent of Bhutan is forest and the population is about 8,15,000. Even though there isn’t much to shop in Bhutan, I came back with an armful of goodies.

What every tourist must take back is pure honey, especially Putka, “Antibiotic” honey from Melipona Bees (stingless bees) breed in protected areas between 700 to 1,500 meters above sea level. Due to their small size, they can get larger nutrients than regular honeybees. It has a tangy/sour taste and trust me when I tell you it can soothe your sore throat in a matter of minutes, it is almost like having a potent shot.

My taxi driver urged me to get as many bottles as I can, along with turmeric, pale mustard not the bright orange we get back home, which boasts of serious therapeutic powers. “We use turmeric on wounds, also to dye garments and it is added extensively in our cooking. Also many believe it is anti-cancer and can treat tumours.

Everything in Bhutan is chemical-free, all fruits and vegetables are grown organically, so whatever you buy is locally farm produced as majority of the population indulge in farming for sustenance,” says my taxi driver Karma Chime.

Turmeric, or Yung Wa, known to be an antioxidant one of the most powerful healers produced naturally in areas like Zhemgang, but in Thimphu there is no haggling for prices and sellers accept Indian rupees (it is same as Bhutanese money after conversion).

Like India, they have a tradition of Thagzo or weaves. But here they use yak’s wool, so a jacket incites same feelings as wrapping yourself in a nice, woolly blanket. And Bhutanese appreciate vivacious colours, they are not really like the black and white lovin’ Europeans, they embrace tomato reds and aubergines, so the Kira, a wrap skirt has now been contemporarised like the sari, it comes pre-stitched and Velcro-ed. A hand woven one can costs you up to Rs 15,000 and a yak’s pure wool wrap Rs 11,000.

The highlight of my trip was meeting the King and Queen of Bhutan, with the lovely Jetsun Pema, who studied at the Lawrence School, Sanawar.

She reveals that she is still in touch with friends from school just like her husband Jigme Khesar Namgyel Wangchuk, who studied in Delhi University and fondly remembers his time in India. The duo charms you with their earthiness, and even though her majesty is the youngest living queen, married to the ‘dragon king’ who completed his education in Oxford University, her knowledge about India is par excellence. She studied international relations from Regent’s University, London. I decided not to visit tourist spots, like most people do when they travel.

I chose to engage with local people and understand their culture and beliefs, mostly Buddhists, who comprise 75 per cent of the population.

I discovered the secret to their happiness, as my well-educated driver, who studied finance and management in Australia wanted to come back to his country and be with his family, rather than earn dollars in an alien land.