Author Pav Singh investigates the truth behind the massacre in his new book. 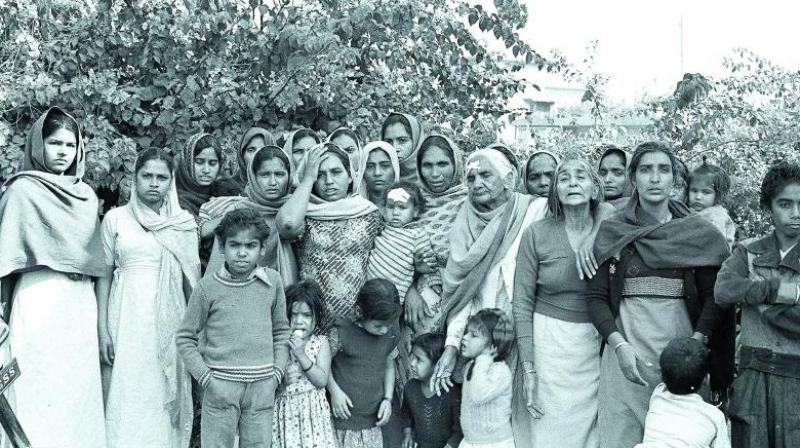 Survivors, mainly women of all ages who had become victims of mass genocidal rape and their children found some safety in the camps. Many families were resettled together in The Widow Colony in West Delhi where they tried to rebuild their lives.

In November 1984, a wave of brutal, unprecedented violence against the Sikhs swept through the nation, leaving thousands dead, butchered, burnt, widowed, raped and homeless. Author Pav Singh investigates the truth behind the massacre in his new book.

One of the darkest chapters in the history of India is the 1984 massacre — a wave of brutal, unprecedented violence against the Sikhs that swept through the nation, leaving thousands dead, burnt, butchered, widowed, raped, homeless. Author Pav Singh too was one of those affected. Feeling deeply for the cause, his new book investigates the truth behind the gruesome year.

The violence following Indira Gandhi’s assassination prompted him to go deeper in the story around 1984 that unfolded in India. “My family only survived due to the goodwill of their Hindu neighbours who in an act of impeccable courage hid them in their homes. But for many years I was perplexed as to why the events of November 1984, where 8,000 Indian citizens (half in Delhi) were slaughtered in four days in the world’s largest democracy, had not been acknowledged in the same light as other crimes against humanity of similar scale — like the Srebrenica massacre of 1995 in Bosnia. Internationally recognised as genocide, the authorities also ensured that the killers of 8,000 Muslims were brought to justice there,” he says, adding, “Over the years it slowly dawned on me that the official newspeak of the anti-Sikh ‘riot’ that had taken hold in the public mind, by its minimising tone had trivialised the series of mass crimes that had taken place and damaged the pursuit for justice. To challenge this I set about collecting the many harrowing testimonies of the survivors to the atrocities.” 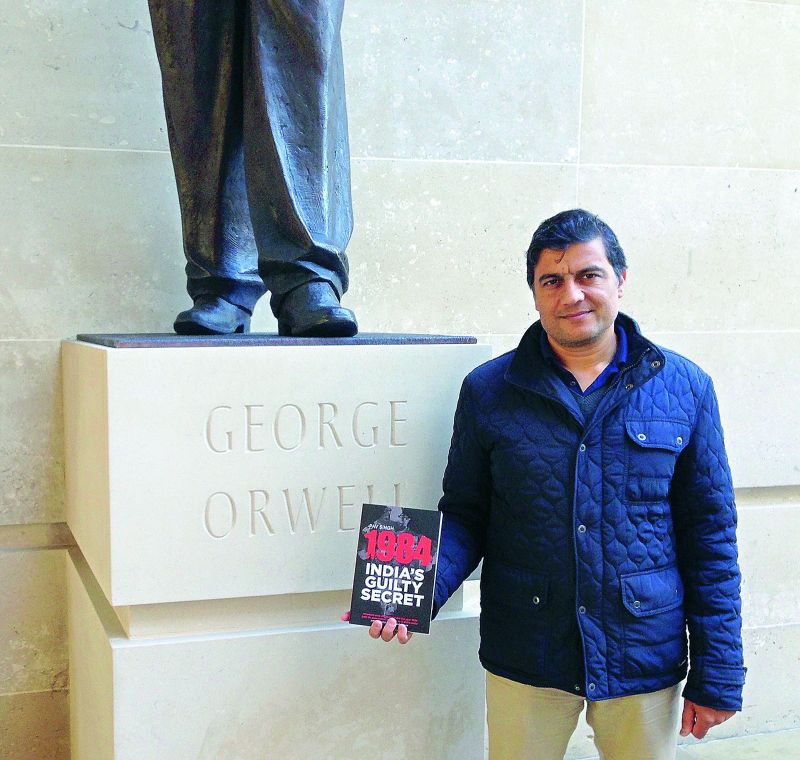 To his surprise, this characterisation of the carnage as a ‘riot’ did not match up to the reality and led him to record the historical event. “I recorded what took place in November 1984 across Northern India as accurately as I could. These were a series of organised genocidal massacres, pogroms and mass rapes — and when seen in its entirety, it amounts to genocide. Yet 33 years on, for the innocents of November 1984, there remains a deafening silence, a lack of concern or consideration of the nature of the violence, which has allowed the guilty to evade justice. This remains a spectacular failure that needs to be investigated. How could the orchestrators of modern India’s worst crime against humanity have got away with mass murder?” 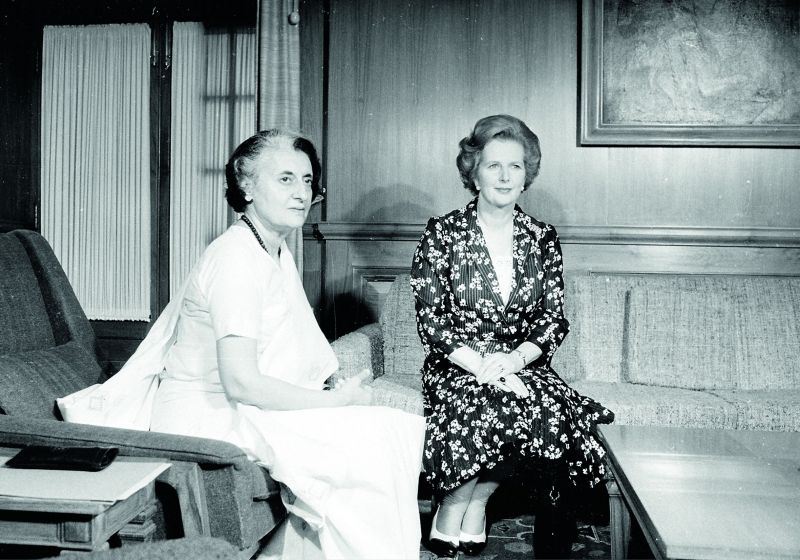 Prime Ministers Indira Gandhi and Margaret Thatcher in the former’s Delhi office. The two shared a strong mutual admiration and were both known by the moniker of ‘Iron Lady.

He began his research with a logical mindset, in a chronological order. “Based on the chronology of events, hour by hour, I was able to show that the violence and rapes, far from appearing as natural outbursts of anger at the assassination of a much-loved Prime Minister, were controlled explosions, planned and executed following a series of meetings held on the night of October 31 and the morning of November 1 by some members of the ruling Congress Party, including sitting MPs and police officers to finalise the plan of attack,” he says, adding, “What I found shocking was the evidence from a number of sources, including from a former Congress party Petroleum secretary, that the violence was planned months in advance and would have taken place even if Indira Gandhi had remained alive.” 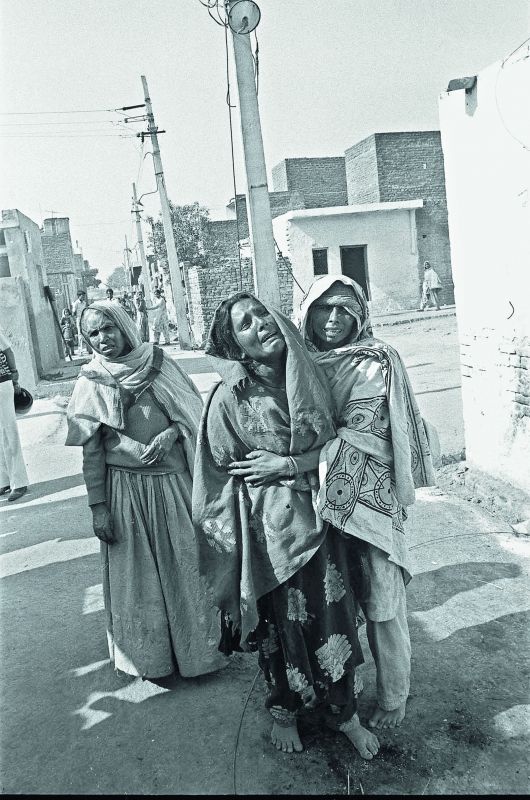 The uncontrollable grief of survivors was all too evident.

He goes on to say, “The central government’s decision not to call out the army immediately ensured the mobs reigned supreme until thousands had been butchered and burnt. Rape and killing-by-incineration were to become the central elements of the violence. The local police were on hand to ensure the operation ran smoothly and in many areas confiscated licensed firearms so that the Sikhs were left at the mercy of murderous mobs. Lists of Sikh homes and businesses were distributed to the death squads ensuring the operation was chillingly meticulous in hunting down their victims who were first scalped and then set alight by either kerosene or the white chemical, phosphorous which burnt its victims to the bone. The police quickly disposed off the bodies of victims, which were not burnt or half burnt. It was to ensure the death toll numbers remained low. Many of the crimes, across the breadth of India’s Hindi cow-belt, in cities, towns and villages and on the trains and buses remained hidden. The cases of mass rape were totally ignored by the subsequent official inquiries.”

As the onslaught continued, the streets and alleys of the capital and elsewhere began to fill with the corpses of the victims.

He believes that there still remains a lingering belief that Sikhs, who he feels are the most patriotic of India’s communities, posed a national threat to India in 1984. “The then-government strategy following Operation Bluestar, the army attack on the Golden Temple in Amritsar and the subsequent official White Paper played its part in labelling both the Sikh-centric Akali Dal Party and by association, all Sikhs as anti-national for daring to call for regional autonomy for the state of Punjab. Yet what was ignored was the central government’s encouraging of communal forces and its potent game of playing politics that caused a rupture in community cohesion. The killings of Hindus in the state are often cited in order to justify what took place five months later. But what is easily forgotten is that more Sikhs died at the hands of the terrorists stalking the Punjab than Hindus and many more thousands would die in so-called ‘encounters’, which became a euphemism for extra-judicial killings by the security force.” 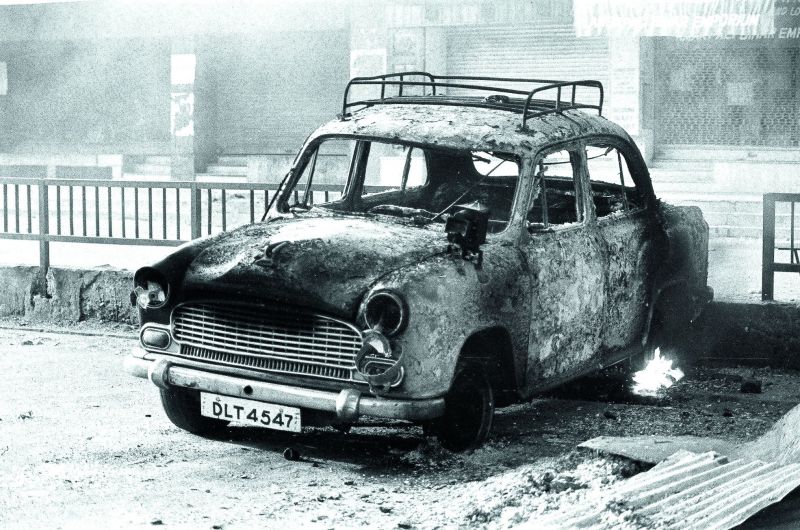 Sikh-owned taxis were burned at their stands.

Asked if the general elections, that are not far off in India, or the political atmosphere in the country could be affected by the release of this book, he answers, “In terms of the political situation in India and elections, I remain neutral. The crimes took place on Congress’s watch and there is an urgent need for them to look seriously at what was done since 1984 and why the main perpetrators were promoted to high office when reports of their involvement had already surfaced at the time. The subsequent apology by the former PM, Dr Manmohan Singh in 2005 fell far short of recognising the hand of many Congressmen in the violence. The Congress Party’s original principles of secularism and liberalism stand in stark contrast to what its members committed in 1984.”

However, he goes on to add, “I welcome the comments made by Rahul Gandhi, the new President of Congress, on his recent trip to the US where he indicated his support for the pursuit of justice for the victims of 1984. But simply to argue that there is a legal process to deal with prosecutions is disingenuous as it has been long known that the investigations have fallen short of acceptable norms, particularly as the police were reported to have manipulated evidence and there have been cases of witness intimidation. The Congress Party is at crossroads and it is time for them to do  the right thing, however uncomfortable, and own up to the role of its members in those fateful days that changed the lives of thousands and led to an on-going trauma within the surviving communities.”

Many of the stories that he came across while working on this book could not be incorporated. He shares, “The stories in my book will shock people to the core… But my ultimate aim was to tell the stories that remain untold, despite their submission to the two official commissions of inquiries. In particular those relating to the violence perpetrated against children and even babies as well as adults. I also researched cases of gang rape against women and young girls that took place once the men had been killed. Gangs also abducted many women in nearby villages. Some were never able to return. The photographs were selected on the basis of telling the story, from Indira Gandhi’s assassination to the violence and its aftermath.” He has also included fairly recent images of some of the victims’ surviving children and their continuing trauma.

The horrors of 1984 drastically affected many lives. And writing about it needed a sensitive approach. “As my book documents the testimonies of the victims of heinous crimes, I was conscious that they be presented sensitively, particularly in terms of cases of sexual violence that is rarely talked about even in the Sikh community. I also wanted to ensure I refrained from making wild exaggerations and everything I stated was backed up with evidence from reputable sources, all clearly referenced,” he says.

Given the delicacy of the topic, the writing process had its fair share of difficulties. “Trawling through hundreds of affidavits and witness testimonies took their toll and there were times I couldn’t face re-reading them. Luckily, as a marathon runner, I spent time in the outdoors between writing which helped me manage the stress in dealing with such difficult material.”

Pav Singh feels deeply for the victims and says, “I hope the book triggers a debate in the country about what took place, which in my view was the very negation of the idea of India. How the justice system was circumvented in favour of the perpetrators. I am advocating change — that a law on genocide is put on the statute books and all cases relating to 1984 are opened on the basis of crimes of genocide or incitement to commit genocide and a truly independent mechanism is created, so that justice can finally be delivered. That a safe space is created so that the women victims of sexual violence can begin to tell their stories and rape prosecutions begin. That both Hindus and Sikhs come together to reclaim the narrative from the perpetrators and ensure such acts never take place in any community.”

While the violence he has described in this book is graphic, he makes no apology for that. “I owe it to the victims and survivors of the 1984 Sikh genocide to give as clear and unflinching an account as possible, in order to help change the narrative, bring about an end to the impunity and to ensure justice for the survivors of India’s guilty secret,” he concludes.