Designer Rahul Mishra too had an issue with highstreet chain Vero Moda and accused them of ripping off his designs. 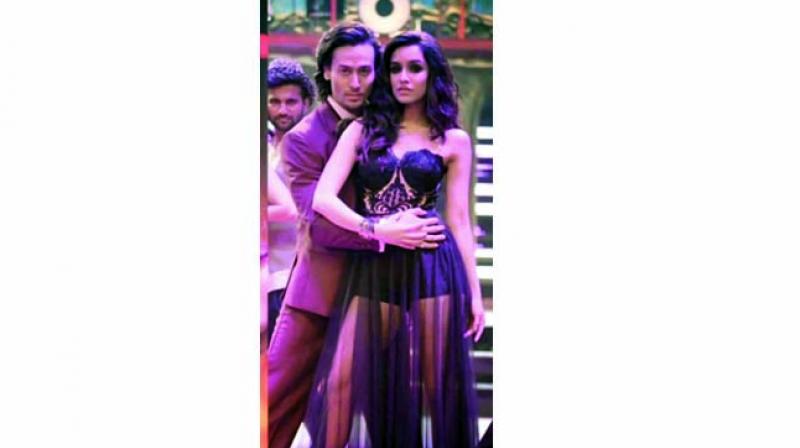 In the fickle AND fast-paced world of fashion, designers need to innovate, reinvent and evolve. Some fashion houses, however, resort to blatantly plagiarising the designs of others. Now, Instagram’s self-appointed fashion police has made it their business to spot the copycats and their bootleg creations.

What is the definition of originality in the fashion world? High- street brands like Zara, Mango, Vero Moda, W and H&M are known to draw inspiration from designer labels. But what can one say about designer labels churning out collections that are not just inspired by, but are a complete rip off of their famous counterparts?

The birth of the online fashion police — Instagram acc- ounts like DietSabya (@dietsabya), DietPrada (@diet_prada), Rosa_h_f(@rosa_h_f) has expo- sed the lack of imagination that most designers seem to suffer from.

On a daily basis, these accounts compare the work of each and every popular design house and point out how A’s collection looks identical to B’s collection, if not the current line, then say from two years ago. 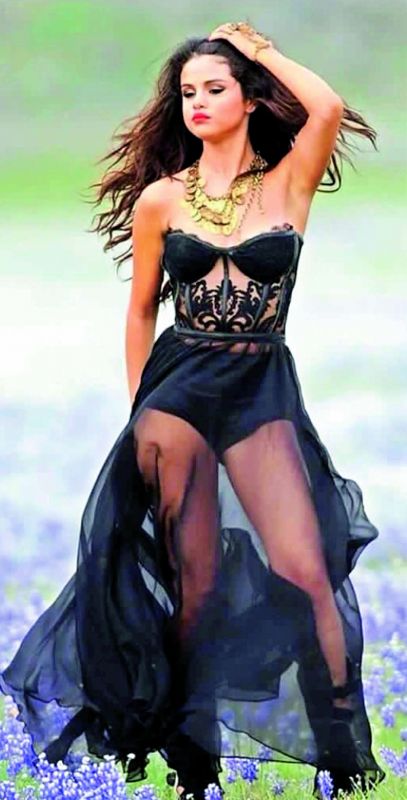 Diet Sabya concentrates on the Indian fashion industry and is constantly accusing big names like Manish Malhotra, Shane & Falguni Peacock, Anju Modi, Sonaakshi Raaj, Payal Singhal and many upcoming designers of ripping off prints, styles and the look of their national and international counterparts.

Are these accusations fair? “If one designer is doing choodi sleeves, it doesn’t mean another can’t do it since this technique has been around since the Mughal era,” says Tina Tahiliani, executive director of the famous designer store Ensemble and designer Tarun Tahiliani’s sister.

She continues, “Anamika Khanna has made the cape relevant again and now many designers are doing their own interpretations of it. This is not copying. You can’t accuse a designer of copying if they are adapting to certain techniques or embroideries that have been around forever. Everyone is inspired by so many things, like what they learnt at fashion school, crafts, design techniques, patterns, weaves... It’s their interpretation and use of these techniques that matter.” 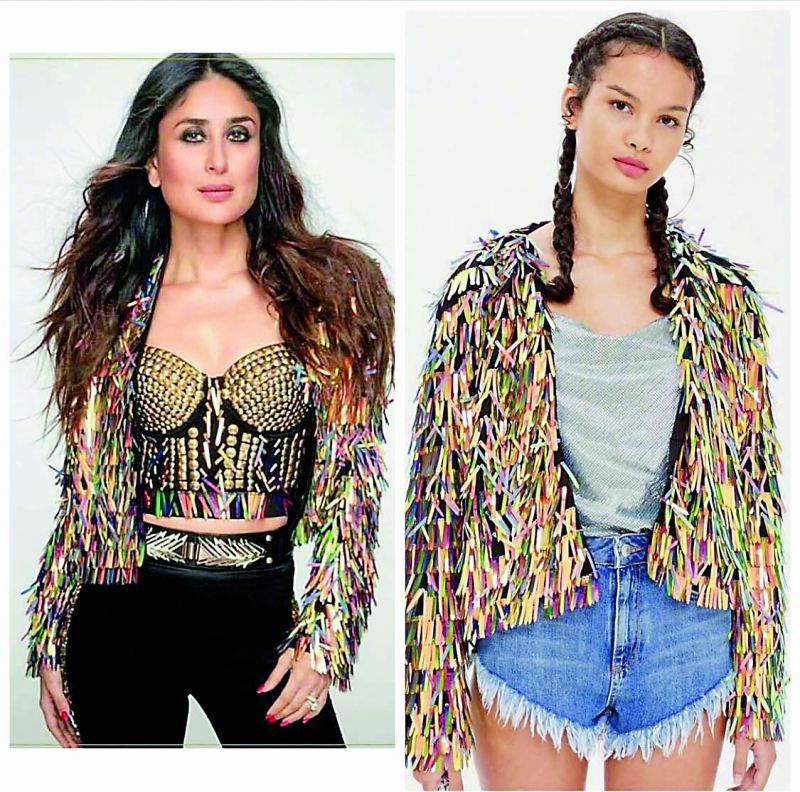 Anamika was just clever enough to rediscover and reinterpret it first. “If they were blatantly ripping off her look, then that would be a copy and we would never stock such designers at Ensemble,” says Tina.

In an industry like fashion which is driven by current trends, it’s obvious that all design houses will be adopting similar hit looks. It was, however, shocking to see Diet Sabya posting a picture of Deepika Padukone in a white evening gown by Lebanese designer Zubair Murad next to an identical gown by Manish Malhotra.

In another instance, Deepika was again pictured wearing an ‘original’ by Alberta Ferreti whereas Lisa Haydon was wearing, for all practical purposes, the same dress by Deme By Gabriella. 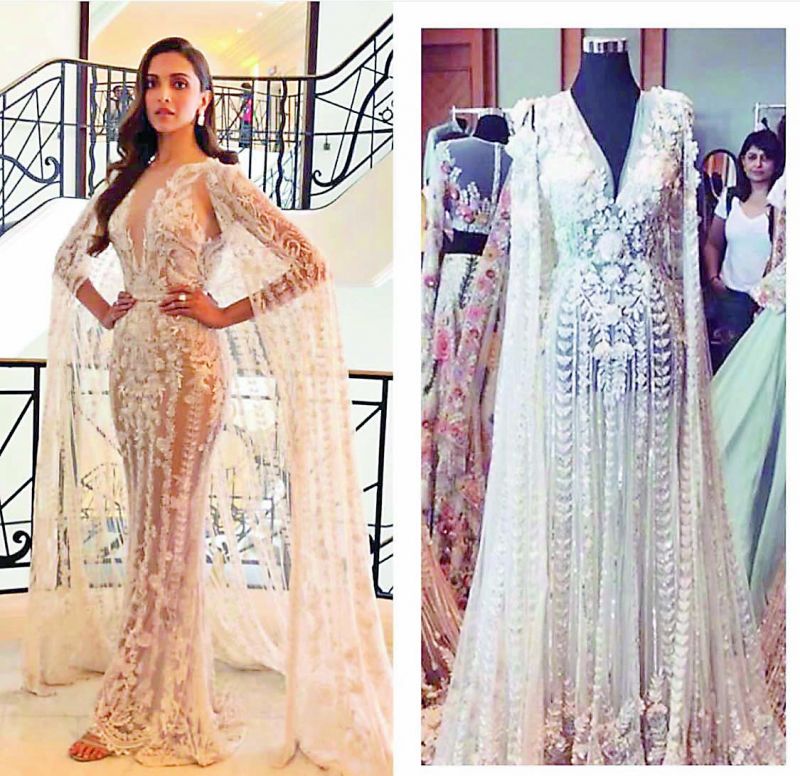 The same account even posted a picture of Shah Rukh Khan’s wife Gauri Khan wearing an anarkali by designers Shane and Falguni Peacock which looked like something designers Abu Sandeep would do because the style was a signature look of the latter. An image of Karan Johar wearing a Shantanu & Nikhil ensemble was put up next to an Anju Modi creation which came out months later looking almost the same.

Another brand outed as a copycat is MxS, a collaboration between designer Monisha Jaisingh and actor Amitabh Bachchan’s daughter Shweta Nanda. A sweatshirt with the slogan “Airplane Mode,” which was “designed” and modelled by Shweta was part of The Laundry Room’s collection way before MxS even launched. In fact, many of the slogans screaming from MxS’ sweatshirts gave you a sense of dejavu because you had seen something similar on clothing from different brands earlier on. 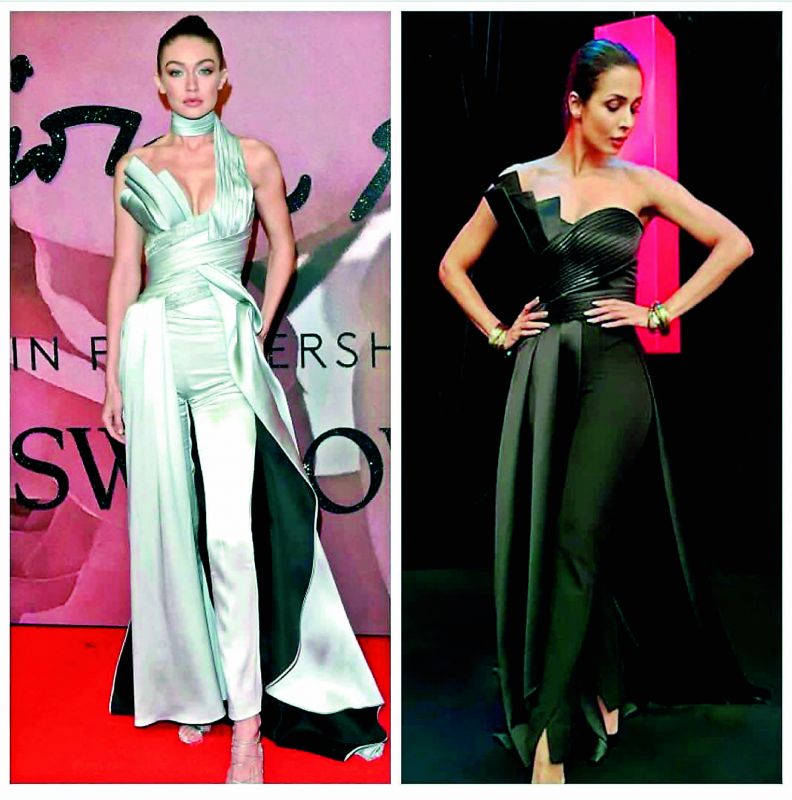 Spotting a Copycat
So, are designers drawing a bit too much inspiration from each other? And is it fair to use the word copycat in front of many an esteemed name? Narresh Kukreja, of the swimwear brand Shivan&Narresh, says, “It’s plagiarism if there is an effort to copy a certain designer or a look. When you spot this effort to look similar, then it is a copy. Certain trends are predominant so designs can be similar. But the evolution of the outfit can be a natural flow from each design house keeping their past collections or sensibilities in mind. The problem is when there is no logical evolution to a designer’s present collection.”

It’s just a coincidence
In certain cases, even if the print is identical, both creations are still originals. For example, it’s unfair to label Payal Singhal a copycat just because she used the same fabric like the French label Antik Batik. Ditto for Indian label Pero using the same prints as Australian resort label Zimmermann, which currently enjoys the status of one of the hottest brands of the moment. Why? The use and style of the fabric is completely different in each of the labels. The only common factor is perhaps the fact that they all source their fabric from the same place in India. Designers from the world over send their teams or come in person to choose their fabrics from certain markets in Delhi and Mumbai. You really can’t blame two people for liking the same stuff. 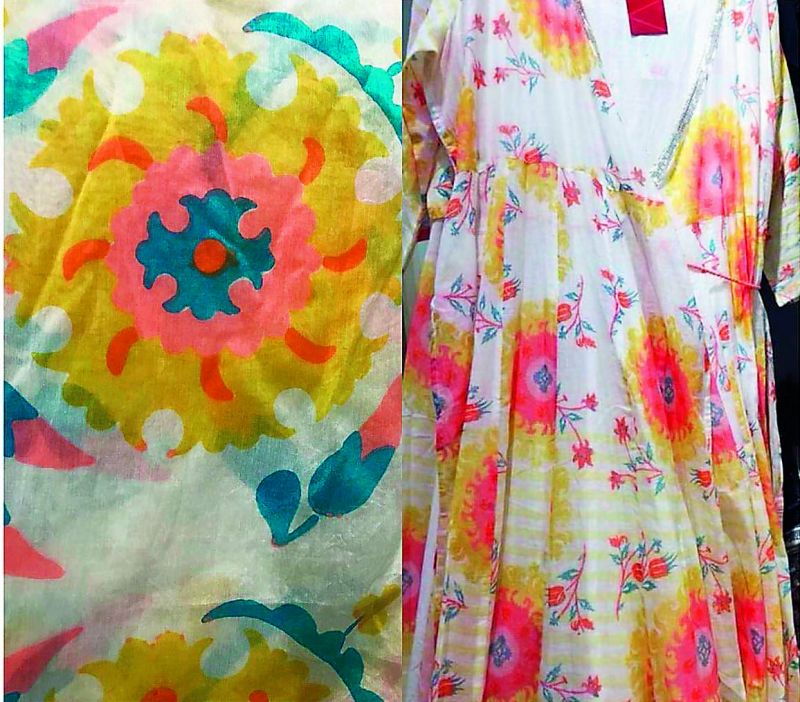 An Anupama Dayal print copied by a brand

The Assistant Factor
One of the main reasons two rival collections look similar is because one designer either learnt or interned with the other, and now has the same ideology. Lata Madhu, owner of the boutique Collage in Chennai explains this theory. “We retail both Rajesh Pratap Singh and Rahul Reddy. Rahul was Rajesh’s assistant for many years and parted on good terms with him. Now, both continue to do a lot of appliqué work and pin-tucks and neither has a problem with the other.” But their work remains very similar.

Nupur Kanoi worked with Anamika Khanna and their aesthetics are similar says Lata, but Nupur has her own sense of design and a very strong customer base. You can’t piggyback on your mentor’s success to achieve recognition.

Tina too believes in this. She says, “Often assistants leave the designer they worked with and come up with a similar look at half the price. We need to support the person who has come up with the original design, not an upcoming designer with four tailors and no overheads or investment.”

HighStreet Headaches
It’s not fellow design houses copying each other that give designers heartburn, but the highstreet labels that ripoff high end styles, mass produce them by the thousands and make a lot of profit on them. 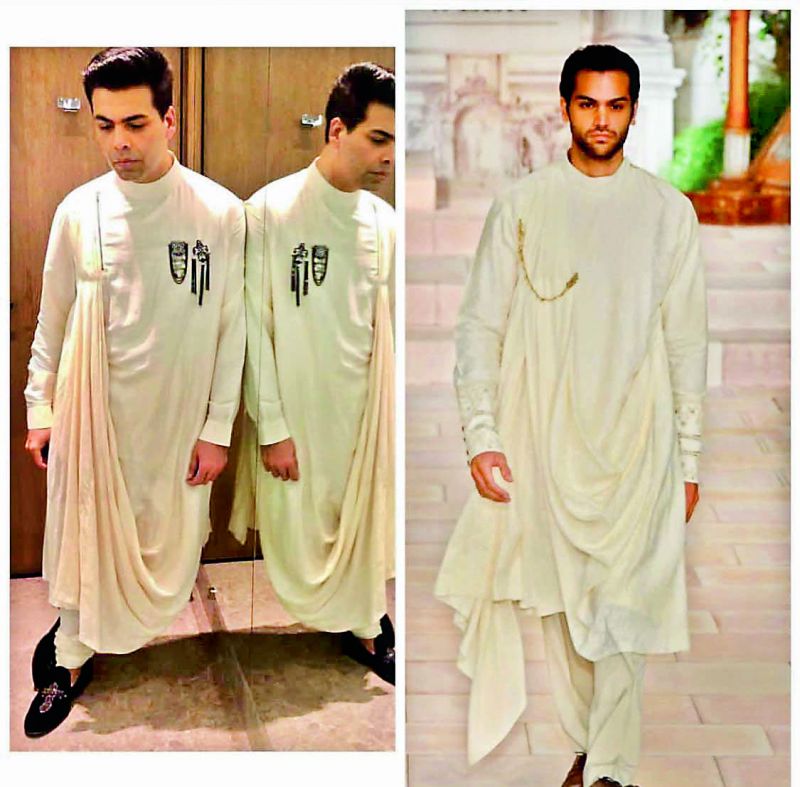 Designer Anupama Dayal, who is known for her bright, happy prints that are a hit with actors likes Sonam Kapoor and Kareena Kapoor, was understandably upset when she discovered an Indian retailer mass producing her work. “Mine is such a strong signature look that it’s a no-brainer that the retail chain has clearly ripped off my designs. It’s not one or two pieces but an entire collection that has been ‘inspired’. I sent the brand a legal notice but am still waiting to hear back. I haven’t even got an apology. I feel the fault also lies in our law. There are no strong laws regarding intellectual copyright and I feel there is a complete disregard to creative work. I feel our outrage is suppressed by practicalities, so we don’t pursue these cases. International design houses have more of a conscience. When the People Tree sued Dior over copyright infringement over a handmade block print design, Dior settled out of court amicably.”

Designer Rahul Mishra too had an issue with highstreet chain Vero Moda and accused them of ripping off his designs.

Speeding Towards Success
The main culprit behind the lack of creativity or the temptation to copy is the superfast pace that you need to maintain while churning out new clothes, in order to keep customers interested. Narresh explains this demand. “Speed is very important in the fashion industry. Every month you need to create new collections to keep getting customers to your stores. Sometimes this can be tough on designers. We all have design teams and assistants who also design but it is the responsibility of the main designer to check every piece. One must ask their assistants where a certain idea is coming from, what is the thought process. If it’s a copy, the assistant must be pulled up,” says Narresh. 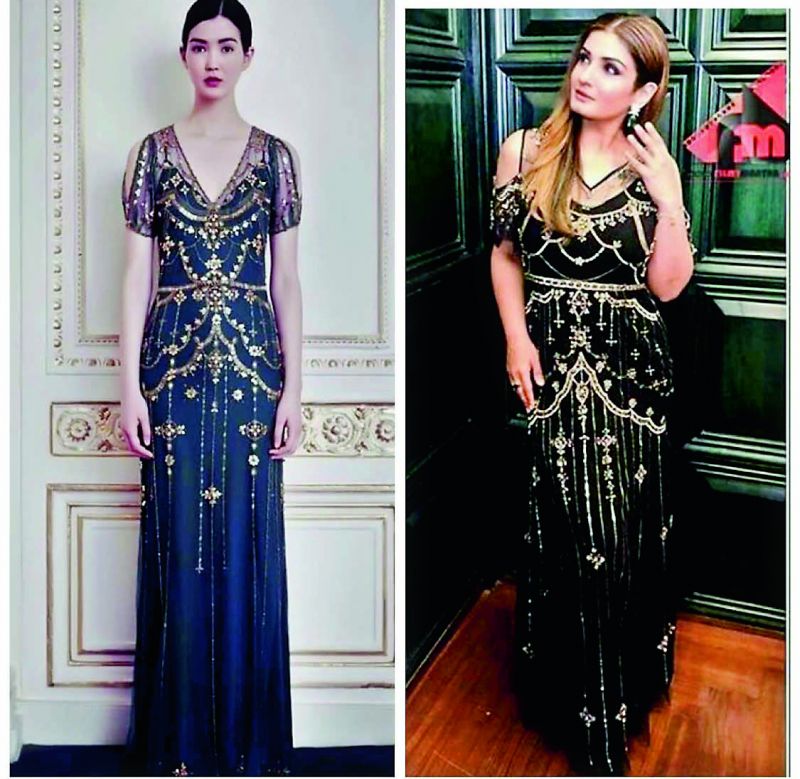 Re-invention is the biggest strength of fashion. If you can’t keep evolving, then you eventually run out of business.

There will always be a market for imitations. It’s the pyramid effect; you create something and it trickles down to the masses.

“You will never have this problem of imitations affecting your business if you constantly keep innovating. While someone is copying your old designs, you will be churning out something new,” advises Narresh.

Guardians of Creativity
The good news is independent voices like Diet Sabya and Diet Prada are proving to be guardians of creativity and originality. While they refuse to reveal their identity, the team behind @dietsabya says they don’t just label anyone a copycat. “We can safely tell you that a lot of research goes into finding the correct source. We don’t want to make mistakes, so we make sure to cross-check.”

There must be some unhappy designers out there who would like to have a word with this anonymous team for labelling them copycats? 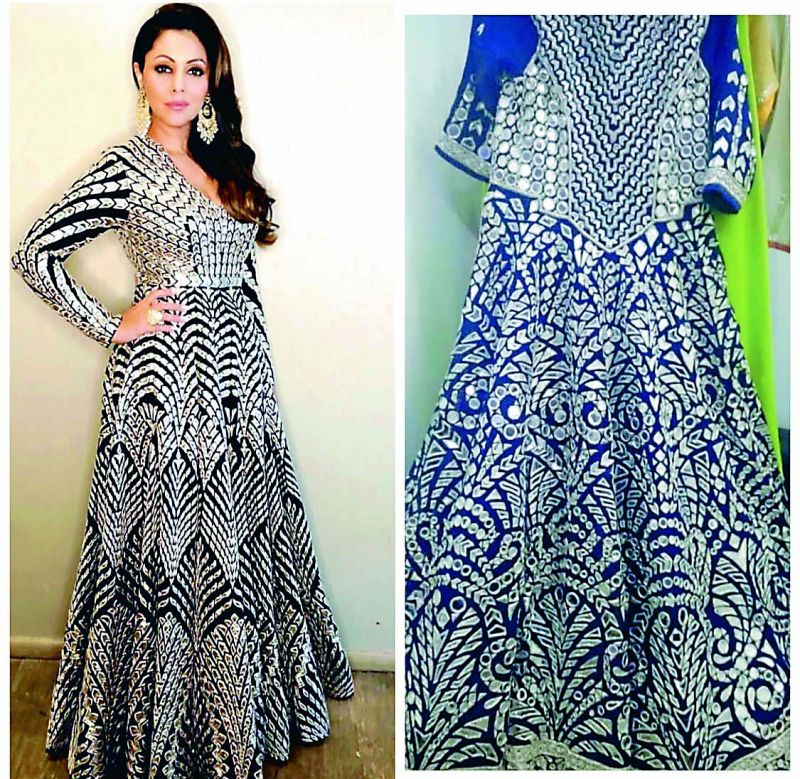 “No one has directly reached out to us yet. We’ve been getting immense love (and some hate) from the industry, but love triumphs hate, right? Or, was it the other way around,” he adds.

What’s the best part of outing these copycats?

“Inclusivity. And a freedom of expression for people who feel like they can express freely without being judged for their lack of a token fashion degree,” say the team behind Diet Sabya.