On the trail of biryani — one of the brightest stars of Indian culinary tradition, tracing its genesis, lores, marriage of flavours and many avatars. 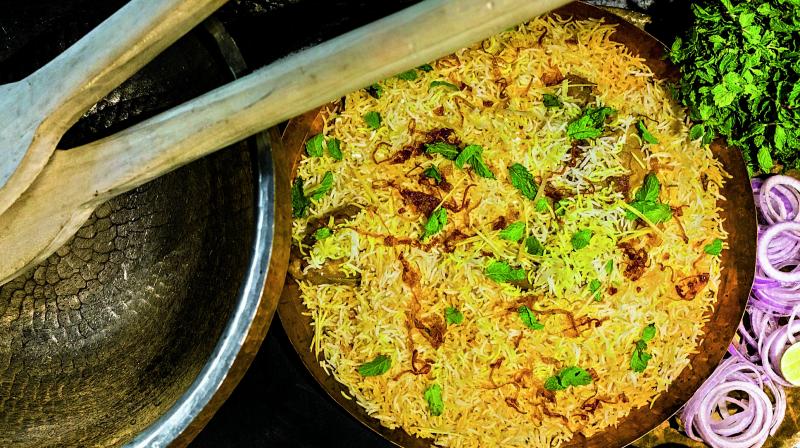 There are various theories related to how the biryani travelled to India.

Biryani, the centrepiece of countless Indian meals and special occasions, is Persian in origin. The word biryani is derived from the Persian word Birian, which means ‘fried before cooking’ and Birinj is the Persian word for rice.

Biryani can very well be India’s national dish. And every region in India has its own special and delectable biryani recipe. From the light and fragrant Lucknowi biryani, to the spicy Hyderabadi one, the Kolkata version with potatoes and eggs, and the mild Malabar biryani, there are numerous regional variations of the dish. Renowned chef Ranveer Brar dissects the biryani right from its origins to the varieties:

Origin & Legends
There are various theories related to how the biryani travelled to India. The rice dish first came to the north of India through the Spice Route and then travelled down south through the Arabs. Biryani was further developed in the Mughal royal kitchen. There are many legends associated with the evolution of biryani. One of the popular ones being the story related to Mumtaz Mahal, wife of Shah Jahan. It is believed that when Mumtaz visited the army barracks, she found that the Mughal soldiers looked undernourished. In order to provide a balanced diet to the soldiers, she asked the chefs to prepare a dish with meat and rice. The dish was whipped up with spices and saffron and cooked over wood fire. 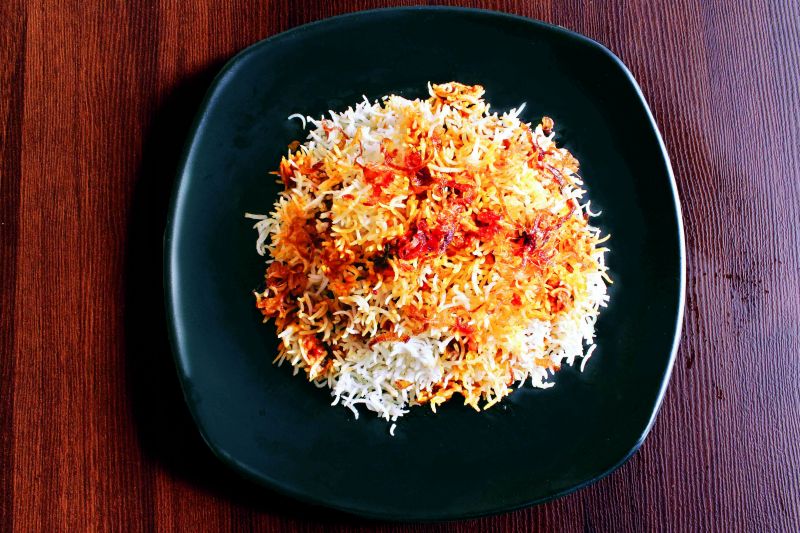 There is another story where the Nawab of Lucknow encountered a bunch of traders from Persia. They were cooking a meal underground and the nawab could only see the lid. But the fragrance of the food being cooked was so enticing and intense that he asked his men to recreate the same food perfume that he encountered that night. And the biryani was born.

There is another school of thought that asserts the Indian origins of the biryani. There is a mention of a dish Oon soru in Tamil literature as early as the year 2 AD which comprised rice, ghee, meat and condiments.

Since its entry to India the biryani went through a lot of refinements. It branched out in two ways. The first one was the Mughlai biryani which was a rustic, robust biryani where the rice and meat were cooked together. In the second version, the rice and meat were cooked separately, refined and then cooked in its own juices. This eventually came to be known as the palao, pulao or pilaf. One of the reasons the biryani sustained itself so well is because of its ability to finetune it. It got endorsed equally by the commoner and the king.

The rice debate
It’s a misconception that the best biryani is always made using basmati rice. In fact a good biryani never uses the basmati. In Lucknow a lot of good biryani makers use Arwa, a long grained rice without aroma. In the south it’s the Seeraga Samba rice. Basmati came to be associated with the biryani as a marketing gimmick to promote the rice variant. 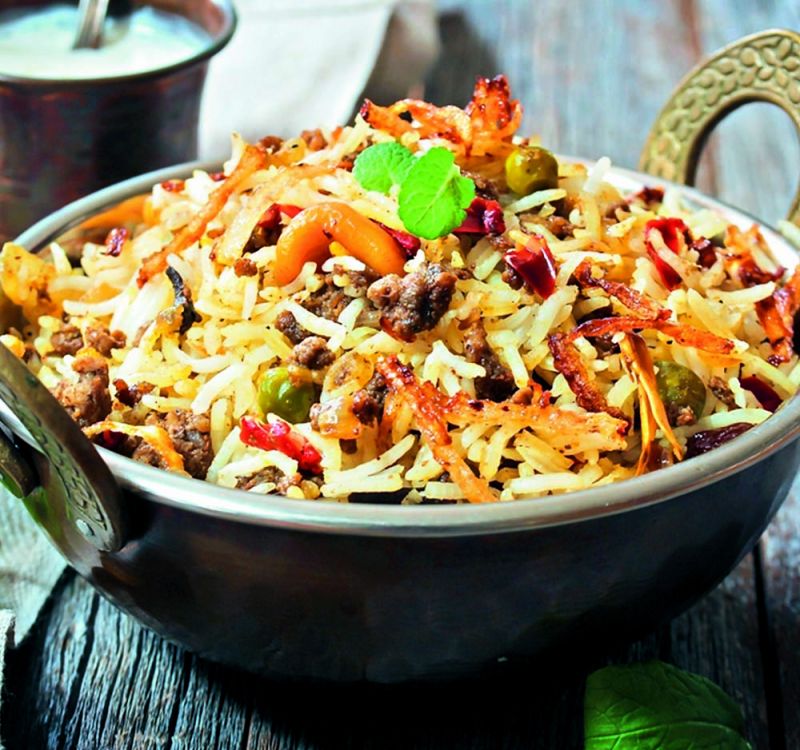 It found further favour when people started adding finesse to the biryani (long grained rice that doesn’t stick together, good fragrance, etc). In a biryani the rice is not the star but only a vehicle for flavour. The masala is the star. Basmati has its own strong characteristic and smell which I feel interferes with the biryani. A good biryani is perfectly cooked meat and rice that allows you to taste and appreciate every element by itself. When you cook a dish, it’s all about balancing flavours. But when you cook a one-pot dish like the biryani, it’s skill plus intuition. You should know when to open the lid. You will never get two chances to open the lid. Let’s take a trip across India to explore the different types of biryani.

Mappila Biryani
This biryani from Kerala is the least corrupt one as it came directly from the Arabs who were trading with the southerners. Made using the seeraga samba rice, Mappila biryani is characteristic in its liberal use of black pepper and dry fruits. The meat and the rice are cooked separately. They are then layered in a narrow-neck pot and steamed, ensuring that the flavours of the meat completely encompass the rice. It is often served with a simple raw mango, coconut and green chilli chutney. The Kerala Muslims have developed many variations of the biryani using chicken, mutton, prawns and fish. 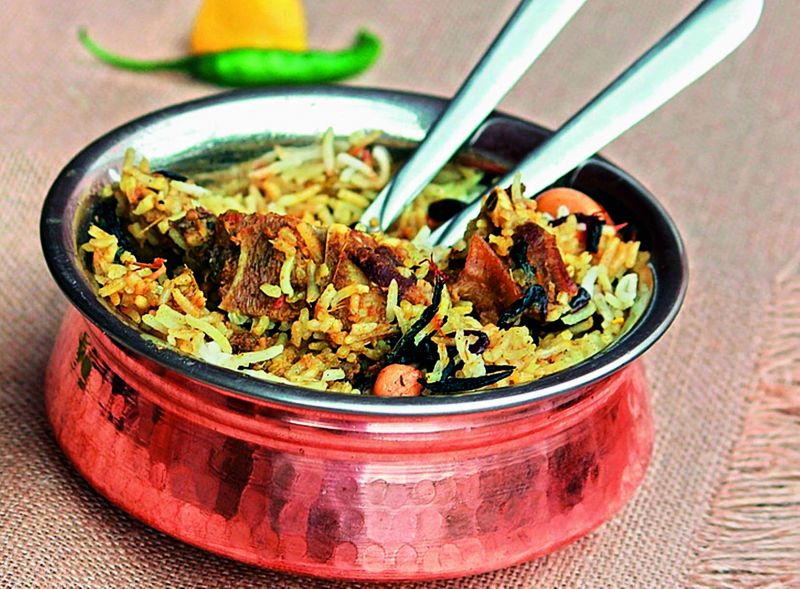 Lucknow Biryani
Nafasat (finesse) was always the key word in Lucknowi cuisine. So the beauty of Lucknowi biryani is its subtle spicing. The meat is cooked with a potli of khada masalas, which is then discarded. The stock is strained and the rice cooked in the strained stock, which imparts a nuanced flavour as the rice soaks up the meat juices. The rice and meat is then layered to make a biryani. It is traditionally served with Burrani raita — raw garlic paste mixed with smoked curd.

Hyderabadi Biryani
This is a very rustic, Turkish variant of the biryani. In this version the meat is roasted with khada garam masalas till it imbibes all the flavours. Water and rice are then added to them and cooked. It’s a masala-heavy biryani. The more the masala is roasted, the better the biryani. Hyderabadi Biryani is made in different styles — ‘Kacchi’ Biryani, where the meat is marinated in curd and then steamed with rice, and the ‘Pakki’ Biryani, where the meat is cooked with all the accompanying spices and then the rice added to the resultant gravy in a sealed handi. It is served with a mirchi ka salan.

Kolkata Biryani
After being banished by the British, Nawab Wajid Ali Shah recreated biryani in the city of Calcutta. As they were unable to afford meat, the local cooks replaced meat with perfectly cooked golden brown potatoes. This biryani is aromatic and flavourful. The garam masala, javitri (nutmeg) and jaiphal (mace) add value to the Calcutta biryani, while kevra gives it a nice fragrance. The golden brown potato absorbs the flavour of the meat and spice and is the hero of the dish. 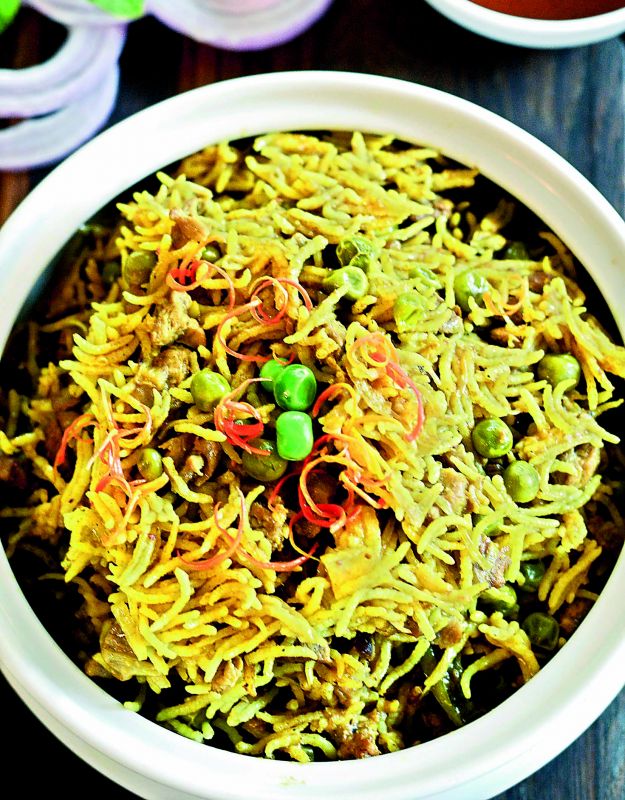 Dindigul Biryani
This famous biryani from the state of Tamil Nadu is slow cooked using only seeraga samba rice and tomatoes. Once the rice is semi-cooked, it is transferred to the dum style. The meat inside becomes melting soft and succulent and the grains of rice stay separate. There is a strong aroma of cloves and cardamom. It is traditionally served with raita or brinjal curry.

Bohri Biryani
This biryani studded with vegetables, potatoes, prunes and the most tender meat always finds pride of place in Bohri homes. Cooked the dum way over a slow-fire, the marinated meat is smoked, then layered with half-boiled rice and slow-steamed in a sealed pot for two hours to trap all the aromas. The seamless marriage of flavours during the cooking process yields a moist biryani, instead of a drier pulao.

Sindhi Biryani
Named after the Sindh province in modern day Pakistan, this biryani uses a large amount of red and green chillies, whole garam masalas and yogurt to get a rich texture. The masala-seeped potatoes, tangy aloo bukhara (dried plums/prunes), mint and khatta dahi (sour yogurt) make it spicier than most regional biryanis.

Hyderabad
Hotel Shadab, near Charminar, in the Madina district, Telangana

Kerala
Border Rahmath Kadai, G.N. Chetty Road (the restaurant is on the border between Tamil Nadu and Kerala)

— As told to Nivedita  Jayaram Pawar