All gung-ho for doosri country 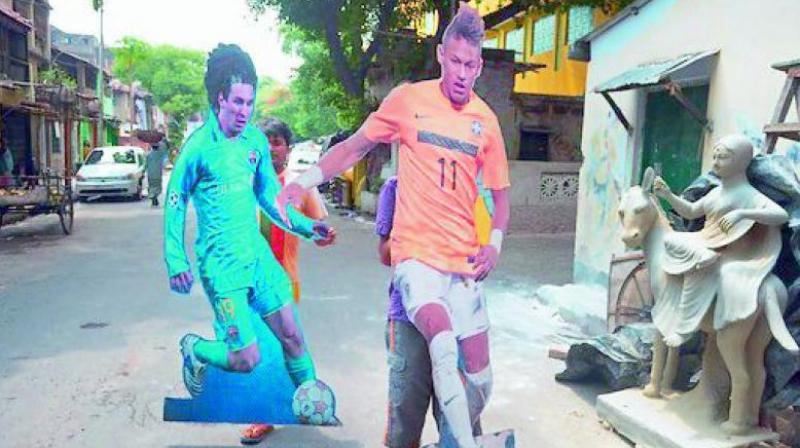 Argentina and Brazil have several fan club pages on Facebook in Kerala and Kolkata where fans regularly post pictures of players, team news and training videos.

With the entire globe tuned into the World Cup, can India be too far behind?  Certainly not if one considers online ticket sales figures, with India featuring among the top 10 countries during the tournament’s last two online sales days on April 18 and March 13. Indians accounted for 1,905 tickets out of 164,136 on April 18 and 4,509 of 394,433 on March 13, ahead of traditional footballing nations like England and Spain. Notwithstanding India’s failure to qualify for the mega tournament even once, the enthusiasm among its people to be part of one of world’s biggest sporting events is palpable, not only for those who can afford to flaunt match-day tickets but also for the millions who will watch the action on TV. Every four years Indians, be they hardcore fans or fringe viewers, are prepared to cry themselves hoarse for a country of choice, usually one among South American giants Argentina and Brazil, showering them with unconditional love and support.

Sensing their willingness for this temporary shift in loyalties, the competition’s official broadcasters in India recently launched a campaign teasingly but aptly named Meri Doosri Country, hoping to cash in on the prevailing mood among the people. Though a cricket crazy country, football has traditionally enjoyed maddening support in pockets, particularly West Bengal, Goa and Kerala. A reflection of this popularity can be gauged on various social media platforms, which are brimming with World Cup posts, of varying taste and preferences.

Argentina and Brazil have several fan club pages on Facebook in Kerala and Kolkata where fans regularly post pictures of players, team news and training videos. As the tournament approaches, photos, placards, cut-outs of Messi and Neymar that have been put up roadside are being posted online. Frenzy surrounding these teams can be gauged from videos that show fans painting themselves in the colours of their favourite team and engaging in dance routines with drums, balloons, flags, participating in processions and bike rallies.