Of such eloquent metal

The history of alloys through the ages has consumed padma shri award-winning scientist Sharada Srinivasan. 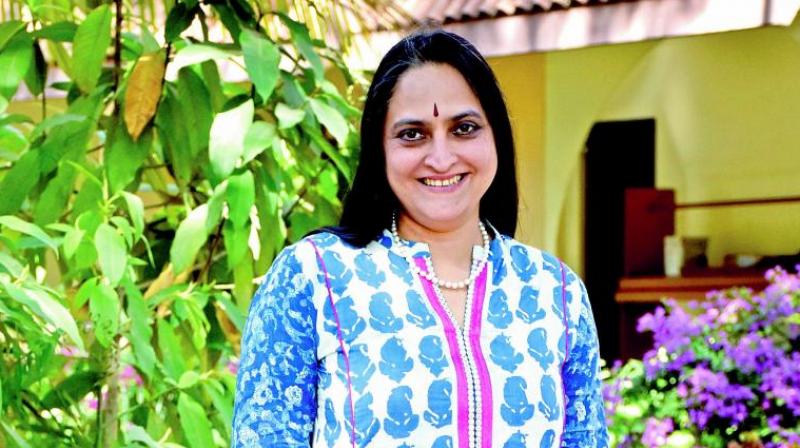 Deep in excavations, hands grimy from digging mine sites to unearth olden day metals with sweat on her brow, her body of work spans decades. Yet in the mudras and varnams she has practiced early in her life, science and dance have come together so beautifully. Ever questioning the nature of being, prying through what’s the norm to unearth metallurgical explorations, she is inspired by alloys and bronze though the ages, with the famed Cosmic Dance of Shiva — Nataraja as her muse. Scientist, archaeologist, archaemetallurgist, culture explorer and danseuse Sharada Srinivasan has toiled  over decades to experiment and understand metals through prehistoric era. The mother and wife who has spent years travelling to far off villages, mine trails and interacted with tribes that were once the brandishers of metal won the coveted Indian honour, the Padma Shri for her patient, determined and committed research. Sharada used archaeometric techniques to explore the classification of south Indian copper alloy metal icons. That lead to understanding the metallurgical finger-prints for bronzes of different periods such as Chola and Vijayanagara, which could be used as a diagnostic to categorise bronzes of uncertain dates and stylistic attributions. Excited, and honoured, the scientist and dancer walks (limping slightly) in the lush IISC campus’ National Institute of Advanced Studies where the 53-year-old academician supervises Phd students, continuing her research and analysis with the ASI and is now working on a project looking at bronze in Karnataka.

A fellow of the Royal Asiatic Society of Great Britain and World Academy of Art and Science, she was the recipient of the Dr Kalpana Chawla State Award for Women Scientists 2011. Behind her calming and expressive eyes lies an acclaimed performer of Bharatanatyam whose Danse e-toile: Nataraja and the Cosmos was an original experiment of a cross-continental internet-streamed duet performance. The professor and alumni of Indian Institute of Technology (Mumbai), SOAS University of London and University College London (where she did her Phd) who comes from an august family of academicians, unearths the glint in her metal journey, and her life in this exclusive interview: 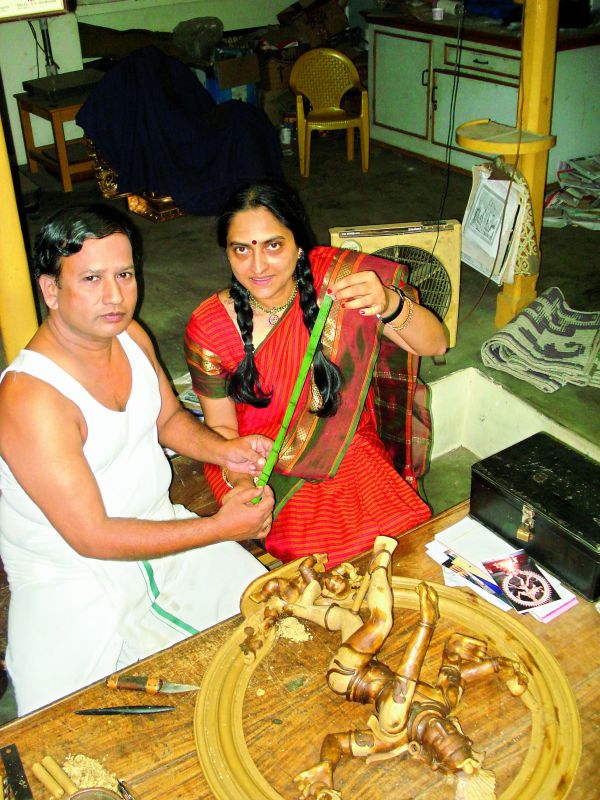 Firstly, congratulations. How does it feel to win the Padma Shri for a lesser known subject like archaeometallurgy?
It is indeed momentous when one’s work over several decades gets such recognition at a national level, and in the subject area that I work in, of archaeological sciences which is a niche with less avenues for support. As a woman scientist and archaeometallurgist, I feel gratified that the award may serve as inspiration for more women to get into STEM disciplines, as well as into archaeology, which is inherently more challenging for women in terms of travel to remote areas, physically demanding surveys or excavation etc. It has also been overwhelming to receive so much goodwill and wishes, nothing prepares one for that.

How would you describe your work and its relevance today? And what were your findings with the Chola Bronze?
My work falls in the domain of what can largely be described as archaeometallurgy and ethnometallurgy — the technological study of metallic archaeological artefacts and art objects which helps us gain insights into the manufacturing techniques and history of technology, and the provenance and sources of metal.  Some of my significant contributions are in ‘technical art history.’ For example, given the challenges in dating of south Indian bronze icons, I attemped to use archaeometric techniques to classify them by calibrating them against their metallurgical profiles since metals made of different sources could have different chemical profiles of lead isotope ratios and trace elements. One of the interesting finds was that the famous Nataraja icon had probably already been cast by the Pallava period since a couple of pieces had lead isotope ratios and chemical fingerprints that did not fit the 10th century Chola period but rather the 7th-8th Century Pallava period. This fits with the emergence of devotional Bhakti poetry by this period by saints such as Appar in praise of Kuttan or Nataraja worshipped at Tillai, the old name for Chidambaram. My studies have also demonstrated ancient skills in exploiting the alloys in bronze in Tamil Nadu and southern India going back to the Indian Iron Age and south Indian megaliths (such as Adichanallur and Nilgiris in Tamil Nadu). 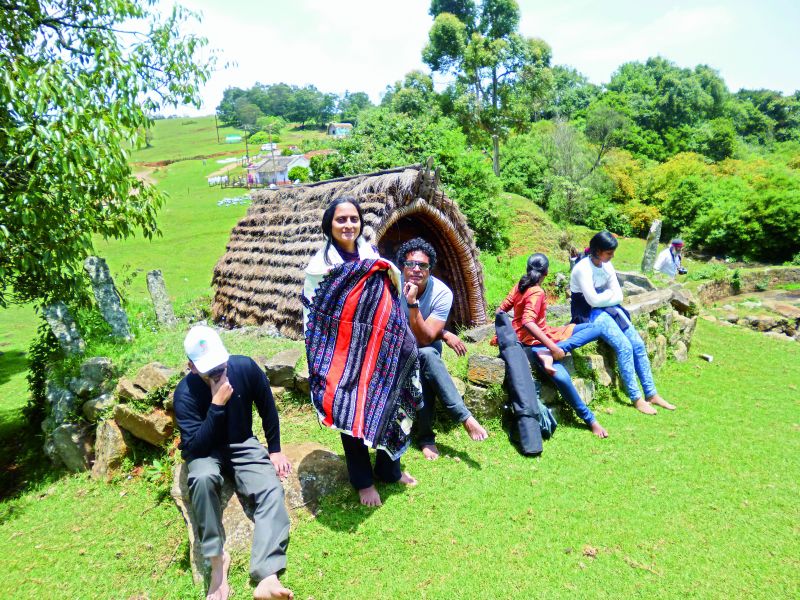 Sharada with her husband (third from left), brother and daughter at a Toda hut in Nilgiri

I have also been studying iron and steel making traditions, for which India has been famed, particularly the high carbon wootz crucible steel made in southern India which was the first grade steel made in antiquity and was traded as far as Persia and west Asia to make the fables Damascus sword blades. Wootz steel attracted the scholarly attention of many European scientists going back to Michael Faraday. Most recently, I was involved in studies published in the Journal of Arms and Armour, UK on the Mysorean rocket of the Tipu era. The finding were the precursors to modern rocket technology!

When does science stop, and dance begin? Uncannily, they find a meeting ground in your work too?
As a Bharatanatyam dancer, the ways in which the mystique of the Nataraja icon has tended to meld together responses of artists, scientists and dancers alike has held a special place in my heart. An aspect that intrigued me was that given that the icon is often described as the ‘cosmic dance’ of Siva, the makers of the icons were probably inspired by celestial observances. To that effect, in a collaboration with late astrophysicist Nirupama Raghavan, former Director, Nehru Planetarium, we explored plausible links of the iconography to the star positions around the Orion constellation (since Nataraja is linked to the star Arudra or Betelguese in the Orion constellation). Danse e-toile: Nataraja and the Cosmos was an original experiment which I co-conceptualised with Jean-Marc and Anne Matos of France, and performed with Anusha Emrith — I was dancing in Bangalore and she was performing in Toulouse and we were interactively dancing via our internet images in a classical-contemporary fusion. The performance not only aimed to explore the interplay of the classical, Descartian and quantum mechanical world, but it also wove in the mystical insights from the Nataraja imagery. It was the most extraordinary and even humbling experience to dance with a virtual image, like an alter ego. So, if dance is poetry in motion, the most satisfying aspect for me has been the encounter of what Ananda Coomaraswamy (a Ceylonese Tamil philosopher and metaphysician), writing on the dance of Siva, succinctly described as ‘poetry but nonetheless science’.

How were your growing years and the influences that saw you take to this profession?
I have to say that I am indeed lucky that I had an upbringing which was very cosmopolitan, and yet very rooted in Indian ethos. My parents, uncles, aunts and family have made prominent contributions in scientific developments and teaching, as well engaged deeply with cultural studies, Indology, environmental issues and wildlife preservation. Of course, like many girls of a south Indian (Tamil-Kannadiga) background, I started learning Bharata Natyam as a child and this passion endured over the years, even though my academic inclinations in my teens was to study physics, which I was glad to have the opportunity to do through a B.Tech in Engineering Physics at IIT Mumbai. My father MR Srinivasan, who was involved with the nuclear power programme and eventually became Chairman of the Indian Atomic Energy Commission, was a big inspiration in my scientific pursuits having heard him lecture often on the peaceful uses of nuclear fission for energy. He used to take me to the power projects as a child and say, ‘See this is the calandria, these are the zirconium tubes!’ He encouraged me to excel at a time when women were not really seen in science. As children, my brother and I spent a lot of time rambling around the rock-cut Pallava monuments at Mahabalipuram (my father was then involved in the construction of the nearby Kalpakkam nuclear power plant where we lived).  My uncle CV Seshadri always said, ‘Don’t be a lab scientist, go out there and get concerned in rural development.’ I guess all this had an impact and I began to feel at some point during my studies at IIT that I would like to explore scientific applications in the study and conservation of art and archaeological objects. In fact, the lead isotope ratio analysis technique that I eventually used to study Chola bronzes also has links to uranium geo-chemistry. It was the allure of the Nataraja, that drew me to the study and the quest to understand and document the technology and metallurgical and crafts traditions. 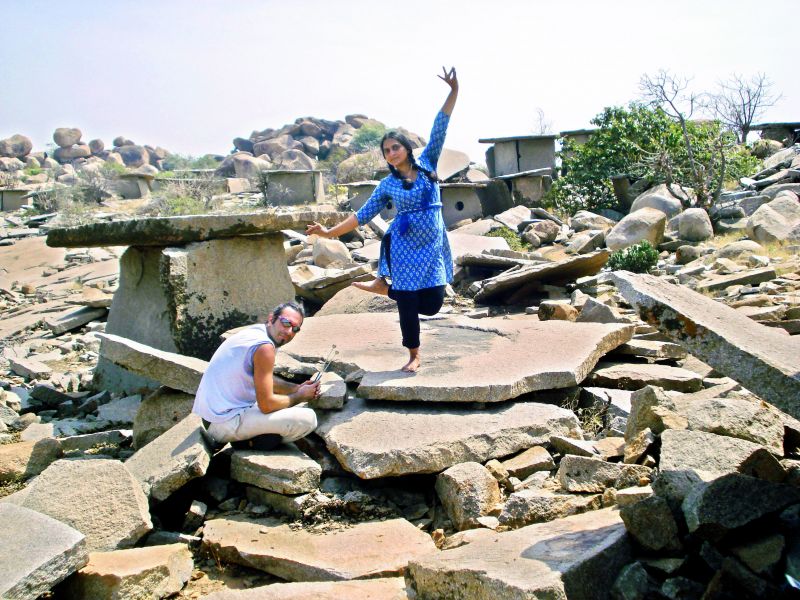 At the Hirebenkal megalithic site

Who is Sharada, the dancer. Your limp, how has it affected your dance?
My husband Digvijay Mallah and family have been huge pillars of support. Our 18-year-old daughter and I enjoy swimming together. At 14, she induced me to go scuba diving in the Andamans  My husband has a tea plantation in the Nilgiris, and also has interests in anthropological studies. His experience in photography and filming has enriched my work, for example, two documentary films I made on metal crafts also includes footage of Kota blacksmithy and remote Toda settlements; He was also a crucial part of Danse e-toile. I am very lucky to have a new-age husband, who has also been hugely supportive in running the household. In fact, my husband and daughter are both way better cooks than me! We all chill out to classical, Carnatic, Hindustani or western, jazz, African or even Korean BTS which is my daughter’s pick! My husband now and then strums a guitar. Of course, the daily sadhana and rigour of Bharata Natyam sustained and gave me a lot of inner strength and physical equilibrium. I suffer from a birth condition called bilateral developmental hip dysplasia. I started noticing it during pregnancy, that I had this congenital problem, thus the limp (she smiles wryly). And yes, it has affected my dance. The hip bones are not properly aligned, and need surgery. I think my hanging on to dance as long as I did helped keep the symptoms at bay, and also added a certain philosophical character to my dancing, the aspect of creation emerging from destruction. To me, it symbolised overcoming your physical disabilities and that added a certain dimension, it makes you take life in a more philosophical manner, and not to take many things so seriously whether you fail or succeed. Now, I have to devise new ways to dance... I like swimming, so maybe something in water!