While his friends pursued engineering or dreamt of just a stable job, Jinson aimed at a career in sports. 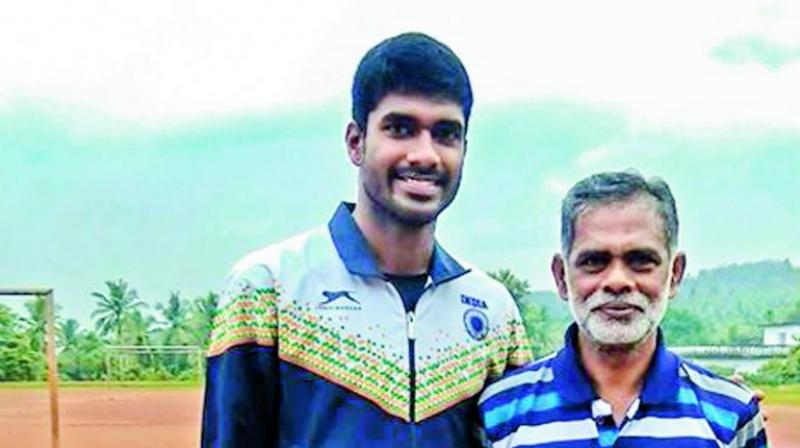 Persistence to succeed and unfaltering support from his parents have helped middle distance runner Jinson Johnson, who won a sweet double  — a gold in 1,500m and silver in 800m in the Asian Games — to scale heights in his sporting career. A decade ago, the 27-year-old Army man was just like any other teenager in his neighbourhood in Chakkittapara, a rustic village in Kozhikode. But his dreams were different and his level of confidence was brighter than any of his peers. While his friends pursued engineering or dreamt of just a stable job, Jinson aimed at a career in sports.

“Right from childhood he was very keen on sports. He used to spend most of his time on the paddy fields with his friends. But he was more interested in cricket. His favourite cricketer is Sachin Tendulkar, who congratulated him after he won the Asian gold medal,” says his mother Shyamala Johnson. Times were financially tough for the family during Jinson’s early years, with his father T. Johhnson, a farmer, struggling to meet the expenses for his sister’s studies and his training. “Those were hard times for us but we did not let our children know our difficulties. We gave them the best we could and allowed them to pursue their dreams,” she says.

His sister Jithara Varun is settled in Chennai.  He used to win second or third places in the district-level meets but his talent was not fully honed till he started training at Gramin Sports Academy in Chakkittapara under coach KM Peter. “Until then I was like any other kid from my locality. Peter sir advised me to concentrate on 1,500m and 800m. Within a year under his tutelage, I won gold in the Kolkata National School meet in 1,500m,” says Jinson.

“He is a born runner with the good physique of an athlete. However, the difference when compared to other runners was the determination he showed during training. He trained diligently and had a fire in him to succeed. His hard work and determination to win have made him reach this level. He was also good in his studies. It was his dream to join Army and he got selected when he was 18 years old,” says Peter.

“My aim is to win an Olympic medal in 1,500m race. I think I can achieve this. In Rio Olympics, the gold medallist clocked 3 min 50.00 sec. It is a tactical race. So there is a chance,” said Jinson. The year 2018 has been a wonderful year for the middle-distance runner as he broke decades-old national records — 800m and 1,500m — and also won two Asiad medals. “I am thankful to J.S. Bhatia sir who coached me. His training methods really helped me win these medals. I was in Bhutan for several months for high-altitude training and I think these all made a difference when compared to last year,” says the runner.