Sailing against the winds

It could have been more than a silver lining for the duo had they got enough time for practice. 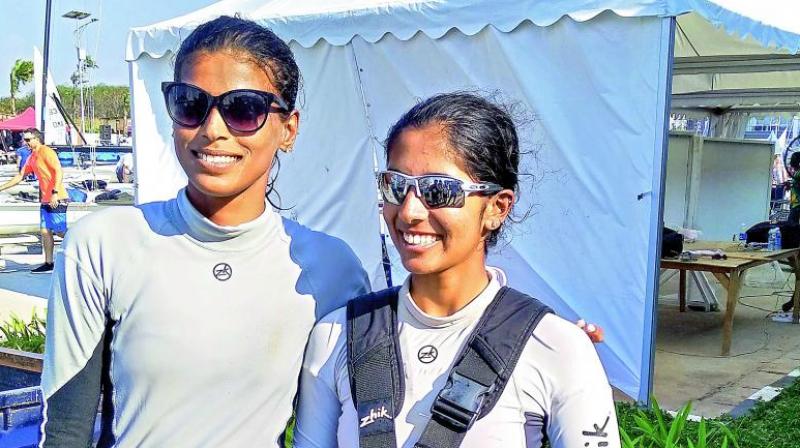 Mumbai girl Sweta Shervegar and her Chennai partner Varsha Gautham combined to win silver in women’s 49er FX sailing event at the 18th Asian Games. It could have been more than a silver lining for the duo had they got enough time for practice. But instead of practicing in water, they were involved in a court battle about their non-selection for the Asian Games. Sweta and Varsha were not the first choices of Yachting Association of India (YAI) selection committee despite winning silver in the Asian Sailing Championship in Jakarta this June and instead bronze medallists in the same event — Ekta Yadav and Shaila Charls were preferred.

“We were initially not selected for the Asian Games by the federation (YAI) and had filed a case in Delhi High Court. We were busy following it in court instead of practising in water. Varsha was travelling from Chennai to Delhi. We couldn’t get enough practice before the Asian Games,” says Sweta who lives close to Mazgoan Dock and started sailing 12 years ago after falling in love with water.
The Delhi High Court directed Indian Olympic Association to decide on the 49er FX sailing team comprising Varsha and Sweta. The duo got less than a week of training together for the quadrennial event in Jakarta.

“Had we got enough time for preparations we could have won gold, but winning silver was a great moment despite high winds blowing. It gives us good motivation to keep our Olympic dream (Tokyo, 2020) alive,” says Sweta. The duo had also won silver in the same country two months back despite some anxious moments after their boat failed to reach Jakarta in time before Asian Sailing Championship in June.

The duo has been managing their funding themselves for training and competitions outside India and started online crowd-funding platform to fund their participation in international competitions and exposure trips. Sweta explains, “Sailing is an expensive sport. We need to carry boats to different countries. Our boat is still in Jakarta. We manage funding on our own through private sponsorships. We are thankful to people who support us but we need more support from government ahead of the Olympics.”