According to her coach K.S. Ajimon, she used to play traditional games like kho kho in her home amid the hills. 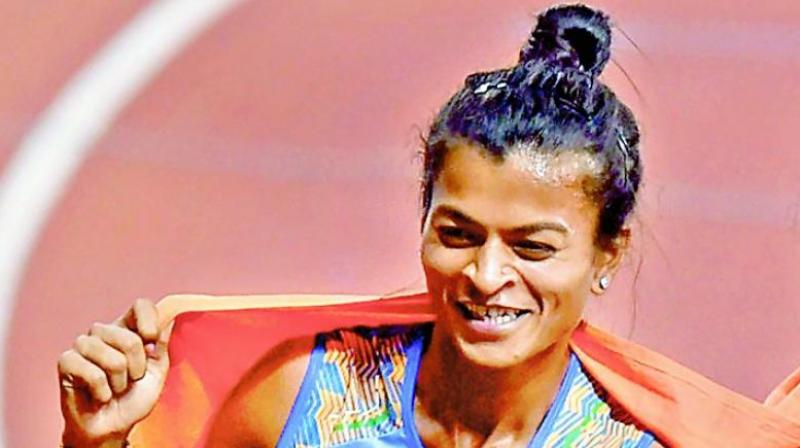 Growing up in a financially-challenged family in Gujarat’s tribal district Dangs bordering Maharashtra, Sarita Gayakwad had no clue about sport let alone professional running. According to her coach K.S. Ajimon, she used to play traditional games like kho kho in her home amid the hills. From a girl running barefoot to becoming the first woman athlete from Gujarat to win Asian Games gold for India, she has covered the long distance in short time through her sheer hard work.

Gayakwad was part of the Indian quartet that won the women’s 4x400m relay gold at the recently concluded Asian Games along with Hima Das, V.K. Bismaya and M.R. Poovamma. “I was very impressed when I first saw her in June 2015. She covered 400m in about one minute and I knew she was made for bigger things. Her parents were poor from a tribal area and didn’t have any idea how sports can change their lives. I convinced them to make her join the academy at Sports Authority of Gujarat with best facilities for free. They were reluctant initially but later agreed and her journey began,” recalls Ajimon.

The ex-services coach credits Gayakwad for grasping things quickly. “She gave her all in training and became a professional athlete within six months. She started doing well at state level competitions and went on to do well at senior nationals. Later I taught her 400m hurdles also besides 400m race,” says the proud coach.  Ajimon trained athletes at national camps and retired as services coach after serving for many years at Army Sports Institute Pune. The Kerala resident then went on to become a coach at Sports Authority of Gujarat in Nadiad and produced world-class athletes there. He found the perfect find in Gayakwad and began grooming her.

She was spotted during Khel Mahakumbh organised by Gujarat government. “She was studying in Surat and had come to participate in a 400m trial of Khel Mahakumbh which attracts mass participation. We spotted her there and supported her since. She was living in a remote area in a muddy house and we made arrangements for her to live in the sports hostel and get a taste of the synthetic track in Nadiad,” says Laxman Karanjgaonkar, Secretary of Gujarat Athletics Association.Sarita gave her best on the track to change her family’s fortunes. Her success at the Asian Games can now end her struggles and give her family a good home and comfortable life. Accolades are pouring in and she is earning rewards for her hard work.