Age on Sunday   09 Sep 2018  Dutee will one day win gold for the country: Parents
Age on Sunday

Dutee will one day win gold for the country: Parents

When the 100m final event started, Dutee’s parents — Aakhuji and Chakradhar Chand — stopped their work and sat before the television. 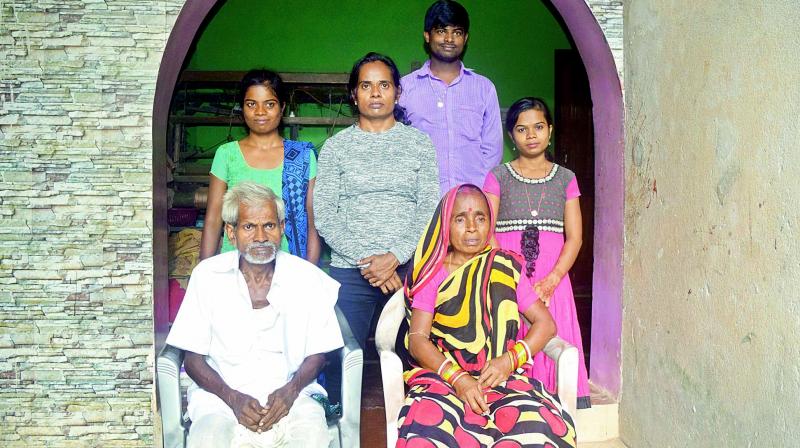 For parents of Dutee Chand, the country’s fastest woman who won two silver medals in 100m and 200m in the 18th Asian Games at Jakarta, August 26, 2018 was a great day in their life. All morning they felt restless, wondering how their girl would do in the 100m event and if she would finally win the gold she had been striving for since so long. However, they went about their usual daily routine of weaving cloth on handloom at their Gopalpur house in Odisha’s Jajpur district, while other members of the family and neighbours went to the village temple to pray for Dutee’s success. When the 100m final event started, Dutee’s parents — Aakhuji and Chakradhar Chand — stopped their work and sat before the television. As she blazed through the track and finished second, tears of joys welled up in their eyes. Though they did not fully understand what the sports commentators were saying in praise of their daughter, they felt overjoyed at her achieving something great that would boost her confidence for the upcoming Olympics.

“We expected Dutee to win gold as she had prepared hard for the event. Nevertheless, we are very glad that she won the silver for the country,” said her mother in colloquial Odia.

Her father, who is a man of few words and rarely steps out of home, did not say much. “Mu bahut khusi mo jhia Dutee rupa padad jitila (I’m very happy that my daughter Dutee won silver),” was all he said to reporters who gathered at their house on the bank of Brahmani river.

On August 29, Aakhuji and Chakradhar couldn’t work. After offering prayer at the village temple, they remained glued to the television set, hoping to see their daughter achieve greater heights this time. When Dutee finished second again and missed the gold by fractions of a second, they felt a little disappointed and heart-broken. But that did not dim their pride in their daughter.

“She has again made us and our country proud. We are happy with her performance and fully confident that one day she will win the gold for the country in Olympics,” said Dutee’s mother.

Feeding and educating their five daughters and a son was a tough struggle for Dutee’s parents who belonged to a Below Poverty Line (BPL) family of weavers. The Odisha government’s `3 crore reward for their daughter’s accomplishment has made them very happy, but they want to stick to their traditional occupation.

“We’ll continue to weave cloth as it is our traditional business and gives us satisfaction. We have been weaving silk saris and towels since long,” says 65-year-old Chakradhar, adding, “Weaving is our profession. Each day we spend four to five hours working on handloom.”