‘Chhota Tyson’ is king of the ring

Amit weighed just 1.5 kg at birth, his frail structure being a concern for his farmer father Vijender Singh and mother Usha Rani. 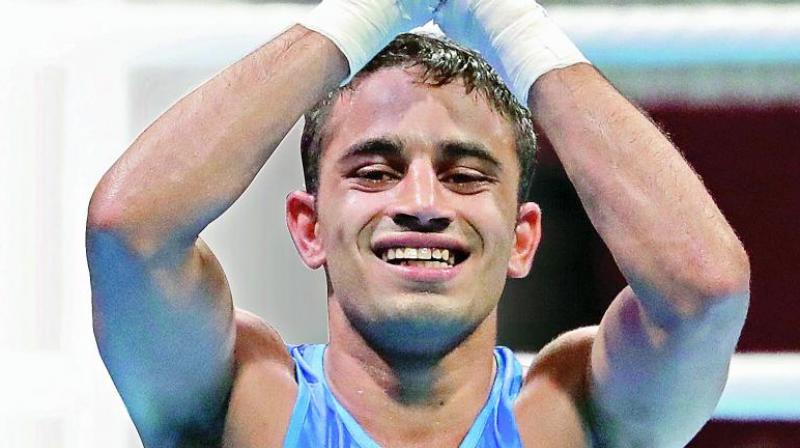 Hailing from the remote Mayna village in Rohtak district of Haryana, boxer Amit Panghal’s parents could never have dreamt that their second son would one day conquer Asia. Born in a modest family, Amit weighed just 1.5 kg at birth, his frail structure being a concern for his farmer father Vijender Singh and mother Usha Rani. But that wasn’t much of an impediment in Amit’s path to success as he went on to become one of the most promising boxers to emerge from the country, eventually punching above his weight to claim his maiden Asiad gold medal.

Not many would have put their money on him to win against reigning Olympic and Asian champion Hasanboy Dusmatov of Uzbekistan in the 49kg final. Dusmatov’s technique and fighting style is considered to be among the best in world amateur boxing and he is an icon in his country. He was an overwhelming favourite against Amit, but the Indian called upon his grit and determination, ingrained in him right from childhood, to achieve the improbable.

While the nation showers him with accolades, many might not be aware of the hardships he endured to follow his dream, acute financial constraints being one of them. Earnings from an acre of land weren’t enough for Vijender to support the ambitions of his two sons. Finances proved such an impediment that Amit’s elder brother Ajay gave up on his boxing dreams for a stable income, joining the Indian Army in 2011.

It was only then that their economic situation brightened. Despite a premature end to his dreams, Ajay encouraged his kid brother to take up the gloves. He introduced Amit to his coach Anil Dhankar, under whom he was training before joining the Army. “I had to quit boxing because of lack of finance, but I made sure Amit didn’t quit because I knew he had the potential to reach the top,” says Ajay.
Vijender recalls, “There were times when he practiced without gloves as we were not in a position to buy new ones. At times we did not have money to even give him a balanced diet but he never complained. We used to borrow money from our relatives and friends so that he could continue his training. The hard work that Amit put in has paid off.

“Proper diet is very important for a boxer’s growth, and that is something Amit always lacked. At times, he fought bouts on an empty stomach and won,” Ajay adds. Not one to forget the sacrifices of his family, Amit dedicated his stunning victory to his father and elder brother, insisting it’s the trio who have won even though he was the one who stood on the podium as the nation’s flag was placed above all at the prize distribution ceremony. “I owe this medal to my family and coach… this medal belongs to my elder brother,” Amit, who is fondly called ‘chhota Tyson’ by his mates, said after winning the gold, his voice choked with emotion, his punches perhaps blowing away their financial troubles, once and for all.