Touted to be the next Formula 1 driver, this 17-year-old Bengaluru boy was recently conferred with the Pradhan Mantri Rashtriya Bal Puruskar. 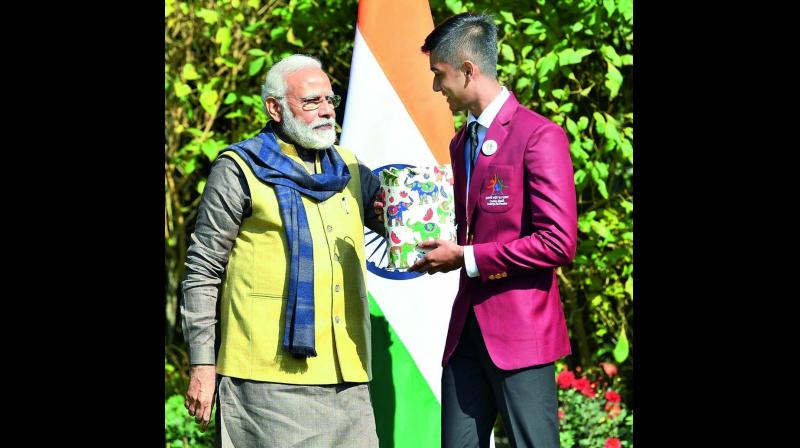 Perseverance, dedication and a never-say-die attitude are few principles that the Bengaluru-boy Yash Aradhya’s parents have instilled in their son. After spotting and subsequently nurturing their 17-year-old’s passion for racecar driving since an early age, Aradhya’s family is currently bearing the fruits of their collective efforts, as their son has become a name in the world of Indian motorsports today.

Touted to be the next-big Formula One driver from India, Aradhya is the first motorsports person to be awarded the prestigious Pradhan Mantri Rashtriya Bal Puruskar — highest civic honour awarded to exceptional students under the age of 18 in various fields.

“Receiving the medal from President Ram Nath Kovind at Rashtrapati Bhavan was an amazing feeling, simply magnificent. I was speechless, and I am honoured,” he exclaims, adding, “My family and I have worked quite hard towards it.”

A force to reckon with, Aradhya was just nine years old when he first sat behind the wheels of a sports car. In a span of eight years, the 17-year-old has won 13 championships, including over 65 race podium finishes. “I have had a passion for speed and cars since I was eight years old. Once we were travelling to Mumbai and I kept badgering my parents with questions such as ‘Why is a car faster than a truck?’ and ‘What is horsepower?’ So my parents put my queries and passion together, and I started racing at the age of nine,” shares the Bengaluru-boy who was handpicked along with 40 other kids by a panel set up by the Union Ministry of Women and Child Development.

Aradhya scored his first National Championship title at the age of 11 at the JK TyreFMSCI Rotax Max National Karting Championship in Micro Category and was also honoured with the Best Karter of the Year award. On the nomination of Federation of Motorsports Clubs of India, Aradhya has gone to represent India in the CIK FIA Academy Trophy, a Global Karting event held in Spain, Belgium, and France. He finished fourth in the Rotax Max Asia Series championship and again represented India in the Rotax World Finals, a global karting event held in Portugal. The sportsman credits his mentors, racing coach Akbar Ebrahim, fitness coach Ramji Srinivasan and nutrition expert Ryan Fernando for his success.

While his most memorable race was his first win, it was the race in Italy that taught him more about the sport. “For my first race, I spoke to Ebrahim sir’s son who gave me a different strategy. He taught me the art of defense. Whereas, in Italy, I learned how to manage tyres and strategies to adapt under changing weather conditions,” he reveals.

The 17-year-old is also mindful of the fatalities this high-octane sport brings and attributes his abundant practice in helping him overcome his initial fear. So when on track, the racer single-mindedly focuses on his next move. “Everything happens so fast. I try to make sure that I get every lap right, keep up the consistency and be focussed,” he asserts as he recalls an incident that taught him to be pragmatic in life. It happened when one of his friend and fellow racer crashed in front of him, breaking a hand.

“After that, I crashed once during a test race but was fortunate to walk out without a scratch. That is when I realised; this is it and what worse could happen,” he says.

And not just the positive outlook, three-hours of gruelling exercise combined with ample research on his competitors’ keeps him motivated. Ask the sportsperson the biggest challenge and he quips, “Accepting failures and finding the right sponsorship that believes in you.”

As for his inspiration, Aradhya looks up to Max Verstappen for his tactics and Charles Leclerc for his calmness. “The way Max races through the track makes him a genius and an aggressive driver which I can relate with. I got a glimpse of him when I was in Belgium but never spoke to him. Leclerc, on the other hand, is smooth and the way he remains calm during the whole race is commendable,” he says. Juggling his academic with his passion is challenging but the student of Bishop Cottons Boys School is thankful that his school is supportive and grants him leaves whenever required. “Managing studies is the hardest part but in my free time, I study and cope up with the class,” he concludes.