The author of Eat, Pray, Love, Elizabeth Gilbert talks about her new book City of Girls, her literary journey and why she is not afraid of criticism. 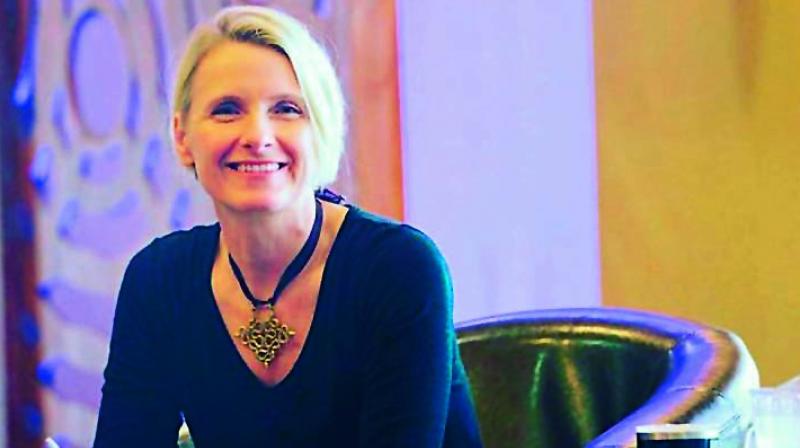 Elizabeth Gilbert first leaped into our consciousness after the runaway success of her best-selling memoir Eat, Pray, Love in 2006. The book, which chronicles a divorced woman’s search for the self that takes her on a journey across Italy, India, and Indonesia, catapulted Gilbert in earning worldwide recognition. The New York Times bestseller even inspired a movie of the same name starring ‘America’s Sweetheart’ Julia Roberts in 2010. Having captivated a loyal readership in India, the writer returned to India to mark her presence at India’s biggest literary extravaganza — the Jaipur Literature Festival this year.

“I have tried for years to come to Jaipur for the festival, but something always got in the way. I was finally able to make the trip this year. I am so happy to meet many of my own literary heroes,” she gushes and reveals that she would also be attending meditation sessions at an ashram in Rajasthan.

Growing up in a small family on a farm with no television and children of her age nearby, Gilbert along with her older sister would invent stories in order to create worlds to play in. Hence, years later now, with her illustrious collection of works boasting of numerous fiction and non-fiction books, Gilbert has mastered the ability to make every human interaction a meaningful one. Her most recent book City of Girls – a novel about young women in New York City theatre world of the 1940s — resonates her prowess. Just like her other novels, City of Girls stands against the patriarchal idea of a woman and breaks sexist stereotypes by presenting ‘ruined women’ who take risks in their romantic lives. “I was tired of reading novels about ‘ruined woman’, so I wanted to tell a different kind of story about girls who are reckless and wild and who get away with it,” she shares.

Additionally, the author craves human connections, which is why as a writer, Gilbert puts out inspirational messages and life lessons folded with philosophy in her books, making them a convincing read. “I am always aware of the reader while I am writing. My primary goal is to entertain readers. I’m constantly editing my work to make it more simple and clear,” she explains and adds that she researches a lot for her book.

For the City of Girls, she spent four years studying the history, music, architecture, politics, food, and clothing of New York during the time of World War II. “It’s almost like learning a second language. You need to become fluent in the time at hand,” she shares. Dividing her time into coming up with ideas, researching, writing, and editing, Gilbert, unlike many writers, writes seasonally and not daily. “Once I begin writing, I will be at my desk every day at dawn, until the work is done,” she reveals.

Further, when it comes to creativity, Gilbert’s a risk-taker. She is not afraid of the outcome, and her book Big Magic: Creative Living Beyond Fear (2015), in which she argues that everyone is inherently creative and they need to let go of the fears to discover that surprising self inside, is a testament to it. “I’m never going to die from a bad book review, even if it gives me a stomach ache for a day or so. I think it’s alright to take big chances in the realm of self-expression,” says the author, who despite her success has also had to face criticism. “Criticism is a small price to pay to live a life of the mind, and to connect with so many beautiful strangers from around the world,” she smiles.

After exploring human emotions on length in more than 18 books, Gilbert’s next is about grief, inspired by the loss of her partner Rayya Elias. “Even in that sad experience, one can find inspiration for creative response,” she muses. While her most successful book is a memoir, the rest of her books also contain vistas from her life. “But with some disguises. Certainly, I am hidden within the pages of all my stories,” reveals the author and adds that she is constantly moved by the number of women who have left toxic relationships and went travelling around the world because of Eat Pray Love. “It wasn’t the first memoir about divorce, neither about a woman travelling alone or going on a spiritual journey. I told a tale that has been told many times before in different ways by other authors. But for some reason, this one caught the imagination of the world. I will never know why, but I am eternally grateful,” she gushes.

With several literary accolades and a film to her credit, Gilbert reveals that her recent novel City of Girls will also be soon turned into a movie. “It has been recently sold to Warner Brothers, where they are currently working on making it into a film. I’ve been tremendously lucky that Hollywood has come knocking on my door a few times,” she says in conclusion.