The actor Aamir Khan opens up about his movies, not promoting them on reality shows and stories from the sets. 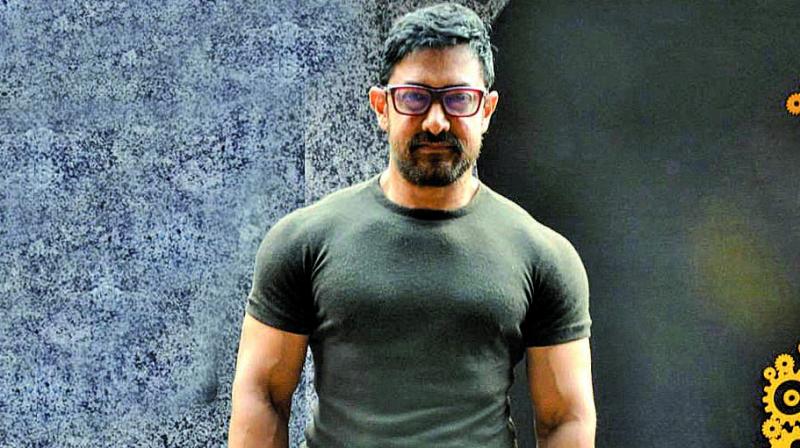 Even as Aamir Khan readies for the release of Advait Chandan’s Secret Superstar, he sits down and chats about his character Shakti Kumar, working with Amitabh Bachchan, the futility of awards and Oscars, and more. Excerpts:

Advait is a debutant director. How did you agree to work with him?
I could see the spark in him, as he’s been working with us for quite some time now. Kiran (Rao, wife), he and I were all of the opinion that I could carry this character off well. Initially, I was a little skeptical. However, after auditioning, I agreed to perform… mujhe bhi mazza aaya! I found Advait to be a sharp, bright person who had the spark for direction and he passed the acid test with flying colours.

Salman Khan, Shah Rukh Khan and you have been ruling the industry for a good 30 years. Do you think a new crop of actors could equal your fetes?
Why not? They too could rule the roost like us. Having said that, I believe stardom is a very intangible thing. It’s difficult to decode stardom. We may have seen a very hard working, conventional or a good-looking actor. But how many of them have made it? At the same time, there are several actors who are not very talented or good-looking but have become successful nonetheless. There’s no specific formula to attain stardom.

Go on…
I remember when I started my career, Ammi wanted me to pursue something else. She would warn me that this isn’t a stable profession; it’s a volatile one. But here I am, almost 30 years in the industry. I don’t think SRK, Salman or even I know why we are here after so many years.

Will we see you working with your contemporaries?
Well, for now I’m working with Amitji (Amitabh Bachchan) in Thugs of Hindostan. When it comes to my contemporaries, why not? If we get a well-written script, I will work with them. The role should be exciting enough for all of us to come together.

Beyond the world of films, who do you share your secrets with, and who is your confidante?
I share my secrets with my wife Kiran and with Imran’s (Khan) mom. She’s my cousin. We have been together from our childhood days. I also have a few close friends.

Do you too have idols? Did you feel like you should be like someone else?
Surprisingly, this isn’t really something that I have thought about much for the longest time in my life. But the idea came to my mind when I was doing Dhoom 3. Around that time, I watched a movie called Searching for Sugarman in Chicago. In the movie, there’s a character, Rodriguez, and his life seemed very intriguing to me. And I wish I could be at least five per cent like that mysterious musician.

Are you still averse to promoting your movies on reality shows?
I will not promote Secret Superstar on reality programmes. The reason is very simple — if the film is small, then one needs to create information and go on to reality shows to promote it. For example, when we released the trailer of Dangal, the required buzz was instantly created. We had to go and promote Peepli Live because people should know who the character of Natha was. Promotions create information, awareness and desire to watch any film. If, with your promos, the audience responds in a way that shows that they are eager to watch your film, there’s no need to promote them on reality shows.

Dangal was quite the commercial success and should have probably gone for the Oscars. Did you apply?
I don’t think we did. My film Lagaan also got an entry to the Oscars, but I don’t remember the procedure. I think there’s a committee that selects movies for Oscars. And I’m of the opinion that we must respect their choices. I feel Newton must be a good movie, and thus has been sent to the Oscars. Now, it will have to be nominated to the top five, and further on. The choice of films by people is very subjective. So let the selected committee do their job. They can watch films in all languages and send an entry to the Oscars. A few years ago, Shwaas (2004), a Marathi movie found an entry.

Does the entry to the Oscars mean a lot to you though?
No, Oscars or any other awards hold no importance for me. Actually, if a film makes an entry to the Oscars, it definitely does find a little more attention from the audiences. Newton, after getting an entry must’ve had a larger audience wanting to watch it. Further, if it enters top five, a huge window of opportunity will open up for them, worldwide. But I don’t take awards seriously. So many movies are made over the year, and many in various languages produced. So, how can each movie get an entry to the Oscars?

How has working with Amitabh been like?
I’m an admirer of Amitji. Working with him was a huge learning experience; he’s a powerhouse of talent. I could watch his talent and his way of working closely while working with him. He’s also a gracious person and a generous co-star. He’s a hard working actor, who is very focused. He invests a lot in an emotional manner. You learn a lot when you work with him. He’s worked for more than four decades, and yet he’s relevant for today’s audiences. This is very difficult. It’s a huge achievement.

Tell us some stories from the sets…
Whenever we would sit down together during the breaks, Amitji would share his experiences from the past and they would all be interesting episodes. Some he may not even want to share publicly. Another time I took him to a movie theatre, walking, without his guards, to watch Wonder Woman. He’s also a lot into music and we have long conversations.