As India’s star sprinter Mohammad Anas Yahiya is set to receive the Arjuna Award, he fulfills a promise he had made to his mother. 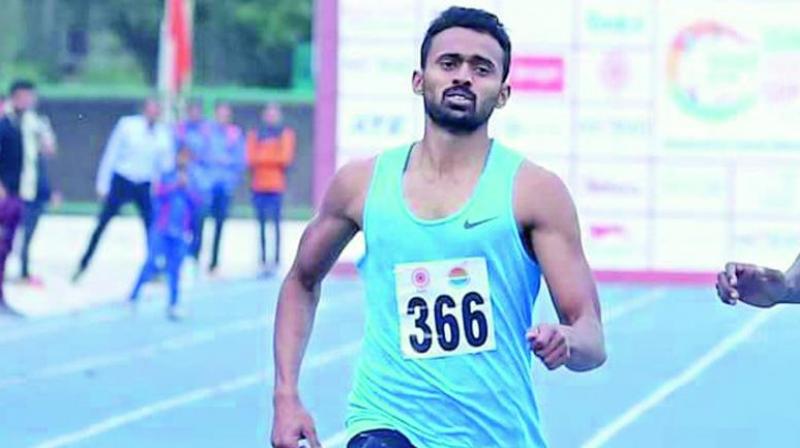 In 2008, when Jamaican sprinter Usain Bolt crossed the finishing line in lightning speed on the Olympic track of Beijing, a 14-year-old Anas was watching it on TV wide-eyed, at his home in Valayidam in the quiet Nilamel village in Kollam, Kerala. Years later, Anas stood with his mouth agape, as he, in disbelief, stared at his idol, the Lightning Bolt, who was standing a few feet away from him at the London Stadium in Stratford. For Mohammad Anas Yahiya, crossing those over 10,000 km between his hometown and the London stadium is more than a life-changing journey. Traversing the hurdle-filled road armed with hope, determination and support from loved ones, the 25-year-old, fondly called ‘Nilamel Express’, is all set to receive the prestigious Arjuna Award for his outstanding achievement in athletics.

Currently in Czech Republic, training along with the 20-member Indian team under Galina Bukharina, the 74-year-old veteran track athlete who coaches him and Hima Das, Anas has just made another achievement. He won gold in 300-metre relay at the

Athleticky Mitink Reiter event there, clocking a record-breaking 32.41 seconds! Having qualified for the World Championships coming up in Doha for the 400-metre event, a fete Hima is yet to achieve, the 400-metre national record holder sums up his whole journey in just two words, “I’m happy.” Obviously, here’s a man of few words.

Anas doesn’t believe that his is a born talent; he wasn’t active in sports till Class X. All he did was running to school and back every day with his little brother. His mother Sheena recalls that Anas and his brother Mohammed Anees were very adamant that they’d go to the school by foot though their parents could afford transportation. That, she believes, might have laid the foundation for the boys to later become renowned sportspersons (Anees is a state record holder in long jump).

Anas joined the sports club run by Ansar, his first coach who saw the potential of the fastest guy in his village. Under Ansar’s training, Anas emerged as the long jump champion of his school and got drawn towards the sport. That was when his father Yahiya, who was working in Saudi Arabia, passed away. “It was a tough phase,” says Sheena. “Anas wanted to join sports and Ansar too came and talked to me. I had only one demand – that he complete Class X with good marks. I was worried; he was always in the ground bunking tuitions. Anas promised that he’d do it. He would wake up at 3 am everyday, study till 5.30 am and then go for coaching. Despite all the pressure and his dad’s demise, he secured 84 per cent marks that year in Class X.” The boy really explored the power of determination.

One year into higher secondary school, Anas secured admission at Mar Basil School, Kothamangalam, which is known for spotting sports talents, at the behest of Ansar who believed that the youngster had a bright future if he was provided better opportunities. Anas recalls, “My event was long jump, but my coach there asked me to try track events and I gave it a try.” The result was awe-inspiring. He stood first in district-level athletics and won bronze in state-level meet. At the national meet that year, Anas clinched gold in 400 m relay. “That year, when runner PU Chitra was gifted a Nano car, my son got a bicycle! That was his first big prize,” announces Sheena proudly.

For graduation, Anas joined Sreekrishna College, Guruvayur, where he was coached by P.B. Jayakumar, Kerala State Sports Council’s elite centre coach. Anas says, “I won medals at inter-college, inter-university meets and soon got entry to the prestigious LNCPE under the Sports Council’s Elite scheme where I got intense training and proper guidance under Jayakumar sir.”

Since then, he hasn’t looked back. At the 2015 National Games, Anas was offered a position at the Navy – his very first job which enabled him to wipe off his mother’s concerns and to follow his passion. In 2016, Anas made his first national record of 45.40 seconds at the Polish Athletic Championship. The next year, he brought home two gold medals from the Asian Athletic Meet in Bhubaneswar in 4x400m relay and by crossing the finishing line in 45.77 seconds in 400 m race. He became the second Indian to reach the finals of Commonwealth Games, over 50 years after Milkha Singh. Though he lost bronze for a difference of 0.20 seconds, he was glad to have improved his timing to 45.31 seconds. And then came the Olympics; Anas earned the distinction of becoming the third Indian sprinter to have qualified for 400 m race in Olympics after K.M. Binu and again, Milkha!

“In the heats, I could finish as the sixth, but the motivation from the event was amazing. I could meet all those international athletes I adore, including Usain Bolt. The experience and confidence international competitions give are unparalleled. My whole attitude towards sports changed with that exposure. It always keeps you motivated to improve and better constantly,” Anas opines.

The Arjuna Award, which Anas dedicated to the flood victims of his homeland, is for him an inspiration ‘to do his job in a better way without flaws and to be responsible to maintain focus’. Since it’s his intense training period for the upcoming World Championships in Doha, Anas wouldn’t be able to make it to the ceremony. “I would be presented the award at another function later,” he says.

And it’s Sheena whose heart swells with pride as he speaks of her son, “He had promised me that one day, when I receive the Arjuna Award, I will see to it that you’d be there at the front row. And now, he had made it. I am waiting for that moment.”