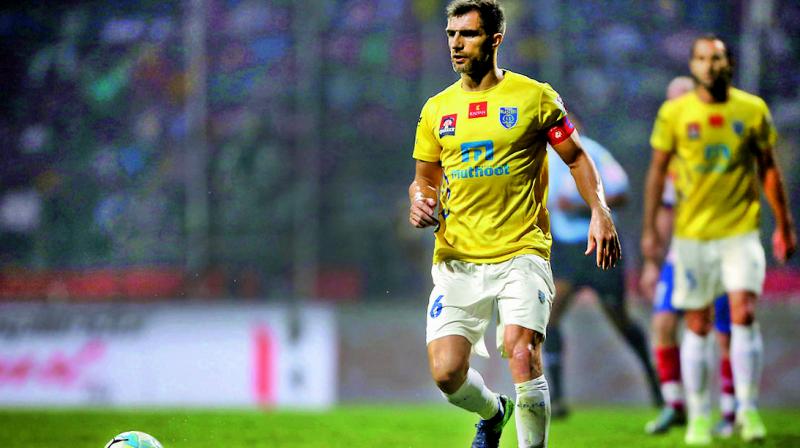 Candid, honest and in control. That’s Aaron Hughes, former Northern Ireland captain, skipper and marquee player of Kerala Blasters, former Newcastle United, Fulham and Aston Villa defender. Aaron knows his role on the pitch, and as tackles run askew, headers and crosses fall pell-mell, he stands formidable, as he was taught to stand on his feet, no matter what.

Ask him about the odd statistic — 455 league appearances in total, and no red cards, and he shrugs, “Not being sent off in games, it’s hard to answer. I get asked that a lot, the most in India! I never paid much attention to it. When I was younger, learning to be a defender, we were always told to stay on our feet, once you commit, you are on the floor and the striker gets past. It’s just been a part of my make-up. I’m not hotheaded or fiery,” says the skipper who was called for Northern Ireland duty in the middle of the ISL blitzkrieg but came back to see his team reach the finals after a nail-biting match and bow out.

Pleasantly surprised at the football in a cricket-loving nation, he admits, “I didn’t know an awful lot about the ISL. The standards of the Indian boys are good. Their attitudes stood out — they want to succeed and improve, their demeanour is as good as I have come across anywhere in the world.” Of the Kerala Blasters fighting run to the finals, he smiles, “It was great to be in the final. Being able to play in Kochi, in front of our home crowd, is a great reward for the hard work,” says the Irish lad who learnt his footie as a youth at Newcastle United, Fulham, Aston Villa, QPR. Looking back, he says, “At each club, there have been special times and games. To be able to learn and experience that, has been paramount. Playing under (Ruud Gullit, Bobby Robson and Alan Shearer) — The biggest names in football, you can’t help but learn. That is the greatest thing about playing in Newcastle, Sir Bobby was among the best managers that I have worked under, he was phenomenal, he gave everyone a sense of what it was like to play for the club, motivated you, every game. He was sort of the first manager I established myself under, I pretty much played the whole season. The fans also worked hard to earn money to pay for tickets to come and watch the game every Saturday. We should appreciate that. That stuck with me right through my career. It’s about giving my 100 per cent, my best effort,” says Aaron, self-belief shining though.

On the high of Euro 2016, he smiles, “The Euros were a dream come true. For a long time, the national team tried to make a tournament, but never did. I thought it was never going to happen, and we finally made it, to be a part of it, not just in the squad but to get on the pitch and play was a dream come true — I guess the highlight was the Ukraine game, it was my first, and it was the one we won, it was real special,” says the Irish boy who grew up watching football every Saturday on TV (unlike now when football is on all the time), and play footie in his garden in the biting cold.

“Once, I joined Newcastle, the senior professionals, you look up and see how they train, their habits and how they are successful, the likes of Alan Shearer, Gary Speed, Rob Lee, Shay Given, etc,” Hughes adds. Whether it’s the Premiere League or the ISL, his work ethic and vision is apparent in the Kerala Blaster’s victories to reach the final. “I wanted to do well, succeed, not just personally, but as a team. At my age, my body still allows me to do it, and I still have the desire. I want to make the most of it, as once it is finished, it’s finished. That was the sort of thing Sir Bobby instilled in me, to give a 100 per cent every time, if you can do that often, you come off the pitch satisfied,” says the Blasters skipper.

The lad who turned 37 on November 8 realises that age might not be in his side, but his mental strength and steadfast nature is the aura Hughes exudes. He and his wife Samantha have two daughters, and while the family is still in Melbourne where he was playing for Melbourne City FC, he will decide his next move by January, “Family life is the same, I train, come back, stop for (groceries) dinner, pick the girls up. All the glamour of football goes out the window the moment you step out of the training pitch and head back home, back to the chaos of normal life. It is a good thing, being grounded.” The father of two girls, Keira and Leila, 12 and 10,  regards their birth as the most cherished of life’s memories, “It tops everything,” he says, adding, “They are not interested in football though when I play, they watch TV. They enjoy girly things, Keira loves drama, dancing and performing and Leila loves gymnastics,” says the dad whose ISL season has been the longest he’s been away from family.

A good game of golf, he would like to better his 18/16 handicap, Aaron also loves fly fishing. His brother Ian used to play hockey back in Ireland, though he is not playing anymore, as a goal keeper, as their town is a big hockey town. Coaching, more stints abroad aside, Aaron recognises the need to balance life and when all the lights and sweat is over, “I wouldn’t mind taking a small break from football, try something I haven’t had a chance to do, vacation and perhaps even go skiing,” he grins.