Shruti talks about the many challenges of stardom and straddling between two big film industries. 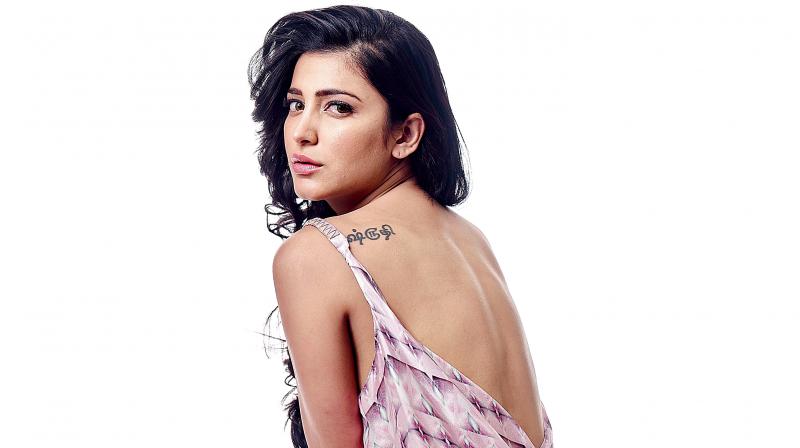 From a star kid to now a leading lady in the south film industry, Shruti Haasan’s career has had the high and lows of any other actor. In a candid chat she talks about all things filmy.

How do you manage to bag distinct roles in the south?
I am very fortunate to get lovely roles in the south — it’s not easy to always do roles that you’re remembered by. I have grown with each film I’ve done. By the grace of god even in Bollywood, whether it is D-Day or the film that I am doing now (Behen Hogi Teri), I have been offered pivotal roles. I have never been typecast and it feels wonderful when people say, ‘it wasn’t expected from Shruti’.

Do you believe that south actors don’t do well in Bollywood — with a few exceptions like Dhanush?
I think Welcome Back was a commercially successful film. D-Day was critically acclaimed, but not commercially successful. The fact that Bollywood opts for remakes of south films shows that the two industries share a cordial relationship, but in the end it depends on the audience.

Did you feel pressurised coming into the industry from a filmy background?
No, not at all. I have never felt this before and will not feel it in future either. People outside probably imagine that since I am from a film family, I only discuss cinema with my parents and sister. But like any other family, we talk about regular stuff too. Of course we do discuss the films we are doing. Despite having a background like ours, both my sister and I have made our individual careers.

Would you say that the south is your parent industry?
I don’t look at it in a way that one has two parents belonging to two different cultures. I don’t feel India looks at it that way either. It is very difficult to market yourself otherwise.

How is Behen Hogi Teri with Rajkummar coming along?
It’s in the works. It is different from what is normally done in Hindi films. It is really fun and very relatable. What I loved about the story was that it goes back to the time when there was a certain innocence associated with romance. It was a simpler time, a more beautiful time. My character is the perfect mix of boisterous but vulnerable — I really like that about her.

What went wrong with Shub Mangal Savdhan, the south remake with Aasanna?
I have no clue what you’re talking about.

The film with Kartik Aryan?
I was never in that film. They were just rumours, the film never came to me.

How do you deal with success and failure?
Starting out is never easy — some are met with more success, others with more failures. Failure however, is harder to handle. It is a life-changing experience. But it is also something that I don’t take seriously at all. You don’t join this business or decide to be an artiste thinking ‘I want 10 on 10’ or that ‘I want to win this gold cup’. That’s not why you choose to do it, you choose to do it because you like it. Sometimes things work, sometimes they don’t. But it is really just a part of the whole endeavour to be an artiste or a performer or an entertainer, so I take it in that stride and I learn from both the things equally.

The south film industry doesn’t churn as many controversies as Bollywood. Do you think it’s a lot friendlier?
Honestly, I have not looked at it as Bollywood or South as you say. I have never really bothered about what other people are writing about me anyway. If I was that bothered about the so-called clash of contemporaries or what somebody else is doing, it would be practically impossible for me to care about my own job. But that applies everywhere in the world. Tomorrow if I were to work in China, I would have the same approach.

Will we ever see you and Akshara on the big screen?
I hope so, if the subject demands, it cannot be something that is forced.

Do you give any tips to your sister in any way since you’re a senior in the industry now?
She is very intelligent, I don’t really need to. I can always help her though; the support is always there. But I feel that the new generation is at least 10 times faster than we were.