Drones are distributed sensors that make the internet smarter. 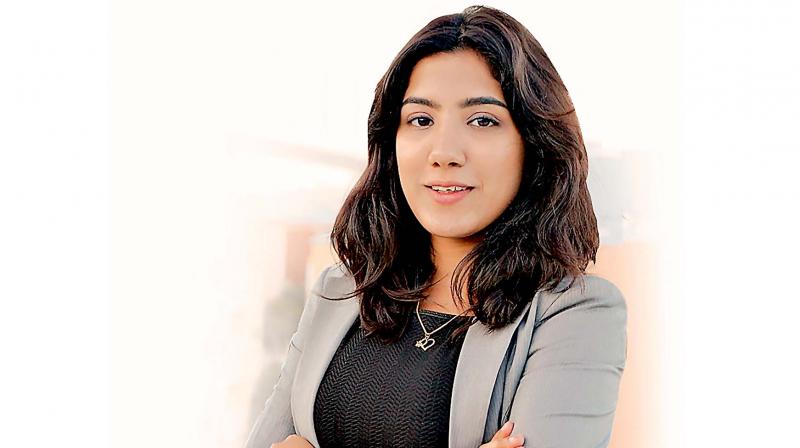 Twenty eight-year-old Sonal Baid, the only woman in a male-dominated industry of Drone manufacturing, talks about her love for flying machines.

Drones are fascinating objects and most often, we associate it with the military, but now it has become a trend with growing commercial application and a wide acceptance by consumers, thus, gaining growing popularity. Spearheading this revolution is Sonal Baid, an aerospace engineer from Indore who is the first Indian on Women to Watch in Unmanned Aircraft System’s (UAS) 2018 list for making a meaningful contribution to the drone industry through her startup Kittyhawk where she leads the product management team.

The 28-year-old, for whom it has been just a year since she ventured in the drone industry, says, “Kittyhawk makes it easier and safer to run a corporate drone programme. It is designed for commercial drone operations, both large and small. It unifies the mission, the aircraft, and the data to empower companies to manage in-house commercial drone operations.  From one singular platform, enterprises can manage the complexity of operators, aircraft, airspace, data analytics, insights and compliance to maximise safety and ROI.”

The curiosity for flying machines traces its way back to her childhood. “I remember going to Indore airport with my dad every Sunday, just to watch airplanes take off and land. I have always been excited about machines, especially flying machines,” shares Baid, who worked in space for four years before venturing into the world of drones. “I see UAS as an industry beyond Aerospace. In the last decade drones have gone from curiosity to an everyday tool. The new commercial UAVs are being used for recreation, businesses, and anything else you can think of,” she adds.

Drones are distributed sensors that make the internet smarter. They are now serving as a platform on which different applications, software, and business models can be built. But how are startups really redefining the dynamics of business? “There is a greater deal of respect for drones as a legitimate solution for the enterprise. We are at the adoption stage of these new technologies and the startup culture is enabling a collaborative ecosystem tapping into new and diverse growth areas leading to a growing market forecasted to be worth $120 billion by 2020. With the evolution of regulations, we see drones headed for new heights in the business world.”

The industry in India and US, she feels, is very detail-oriented and moves at a very slow pace. “But it’s justified when you consider the high stakes at play. However, the surge in US-based aerospace startups has not only stirred up competition but also sped up new technological developments. And I guess this is the major difference in both the countries. There aren’t many startups in the aerospace industry in India.  I worked with big corporations back home; and like the US, in India too, these big corporations follow a lot of hierarchy and as a result, the growth is slower. I feel there is not much of an impact on the culture in the industry based on the geography. It’s the startup culture that is playing the major role in defining the industry.”

Baid is not just the first Indian woman to have left a mark globally in the drone industry, she has also been able to carve out a niche in a sector which is still male-dominated. “We always thought, ‘Oh, it’s a male-dominated industry, there’s not much for women to do’. The lack of diversity may not be because of a hostile industry, but because of many women’s lack of confidence to enter male-dominated industries. But it’s not that bad. The struggles, no doubt, are real. But I really wish the success stories about women are used more often to inspire girls in STEM (science, technology, engineering and mathematics),” she says, adding, “That’s the thing that needs to come out, helping women feel confident in themselves and making them feel comfortable that there are people who will support you and guide you. Though at work I’m the only girl but, I am surrounded by a supportive team that values my opinions. It’s important to remember that men can be an asset when working towards equality. Men are becoming more and more supportive. They understand our struggles, they understand the tokenism we face and they are trying to help us. That’s a story we need to tell.”

The journey from Indore to the US was like a roller-coaster for Baid. After completing her high school and undergraduate from Gujarat, she started working in Bengaluru, for about four years prior to moving to US for her Masters. “People often see my education as my biggest strength but there is so much more that defines my work,” she says, adding, “I have had my share of struggles. Times when I didn’t have a job, when I was questioned about my career choices, when I was desperate and almost got forced into switching industries. But it’s the persistence and determination that defines my work.”

However, more than anything, she believes the support from her parents and their belief in her helped her fight the odds. “Coming from a culture where there are two different worlds for girls and boys, it was my parents who encouraged me at every step and gave me the courage to dream and aim high in the first place.”

Though she is just 28, her to-do list is overflowing. “Drones as machines have evolved considerably. This evolution is dynamic — a classic case of Chaos Theory.  Like the butterfly effect of chaos theory, in the UAS industry, there is a sensitive dependence on conditions in which even the slightest, seemingly unrelated event can have a huge difference on the outcome of another. As more and more people and businesses find uses for drones, safety concerns will become a significant issue that will need to be addressed. Through my role at Kittyhawk, I am dedicated to developing products that’d make drone operations safer, thereby, enabling widespread and responsible adoption of UAVs in commercial applications.”

She is also involved with organisations that promote STEM education for girls. “Currently, I am associated with a mentorship program in SF through which I mentor a group of middle school girls in understanding and developing skills required to become tech entrepreneurs and leaders. In future, I hope to continue being part of more such organisations and give back to the society,” she concludes.