Shubh Mangal Saavdhan actress Bhumi Pednekar says that she loves being called a risk-taker in the industry, and that’s what keeps her going. 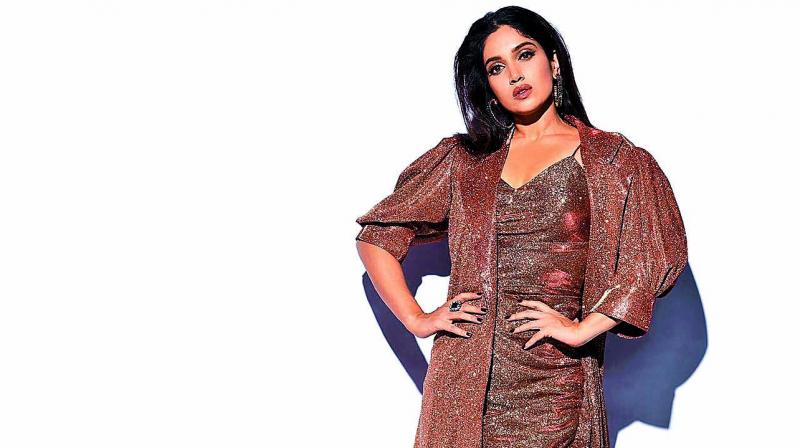 Bhumi Pednekar, who shot to fame just a few years ago with unconventional films like Toilet: Ek Prem Katha, Shubh Mangal Saavdhan and Sonchiriya will next be seen in Karan Johar’s mega-budget period drama Takht and Amar Kaushik’s Bala, in which she will share screen space with Ayushmann Khurrana once again. Given her film choices, the actress has come to be viewed as a star who can put on a successful performance, no matter how unconventional the role is. In a candid conversation, Bhumi reveals her process for choosing films, her experience working with Karan Johar, and much more.

You are touted as a risk-taker in the industry. do you feel pressurised by such strong labels?
I love it when people call me a risk-taker, that’s what keeps me going. I love challenging myself and I have been doing that since my first film. I need to push my boundaries because that’s the only way I will flourish as an actor. My aim is to better myself with each film, because honestly films have been the biggest learnings of my life. This is my calling, and I would not change that for anything.

You are known to be a feminist. Do your principles come into play when you pick scripts? If you are offered a misogynistic film, how do you react to such a script?
I don’t think I would pick a subject like that. Films impact a large part of our population, and Bollywood is the only source of entrainment that we have in India. So I personally feel like I have to be slightly responsible. The idea is not to be part of anything that’s regressive.

But if the subject is such where you have to show a certain amount of misogyny just for the end result to be something that breaks the patriarchy, then it is a completely different journey of the character. I would not want to celebrate patriarchy or misogyny.

Your next film Bala speaks about a dark-skinned girl. As an actress, do you feel this industry is fairness-driven?
I think it is not the industry as much anymore, because I truly feel that we have evolved over the last few years, but I think it is society in general. I don’t think dark skin or light skin obsession is there within my fraternity anymore. We have such diverse people coming in and doing so well; it has tremendously changed over the last few years. I think it is largely the society that we live in.

Unconventional cinema seems like the new commercial space. You started your career with films about social issues, and this seems like a trend now...
It is not that I am chasing content to make a statement. I never had any plan, honestly. I have grown up with a certain sensibility where cinema is concerned, and I think I am part of exactly those projects that I would want to watch. I feel that as an actor, when you are related to a project, there has to be a sense of ownership. You are responsible for the content that is going out. Once you work on that film, and if you didn’t feel proud or satisfied being a part of that project, then it would really be disheartening.

Your last outing Sonchiriya was critically acclaimed, but it failed at the box office. How did you react to that failure?
It was definitely heartbreaking, I won’t lie, because it was a hard-hitting film and the treatment was way ahead of its time. It is a project that I am extremely proud of. I loved playing that character, but it was definitely heartbreaking to see what happened with the film. Whoever watched the film, really loved it, but it was the first time for me where my film has not done well commercially. There was nothing that I could do about it, you take it with a pinch of salt. But I will always be proud of this film.

Post Dum Laga Ke Haisha, there was a two-year gap before your next. Was there any self-doubt?
Not at all. I was mentally prepared, because nothing went off track. In that year I had already shot for Shubh Mangal Saavdhan, so as a newcomer it takes a little time for that constant rotation of films to happen. It only happens once you are two or three years into the business. So I was doing fantastic. After Dum Laga Ke, I was never really worried.

You were offered Manmarziyaan but that didn’t work out. Do you regret not being part of the film? How did you like the film?
I did watch the film and it was great. Anurag is a fantastic filmmaker, and they had great performers. Since this happened, it is not something that we can hold on to. Whatever happened with Manmarziyaan, it was just not meant to be with me and Ayushmann. We were meant to do Shubh Mangal, and it’s absolutely okay.